A bird’s-eye view of the Dubai skyline.

Dubai has retained its position as the number one destination for travel and tourism in the world, with international tourist expenditures reaching $29.4 billion (Dhs108 billion) in 2022, according to the latest report issued by the World Travel and Tourism Council (WTCC).

In its report on the economic impact of cities, the council said that Dubai surpassed Doha and London, with tourists spending $16.8 billion and $16.1 billion, respectively, in the two cities. 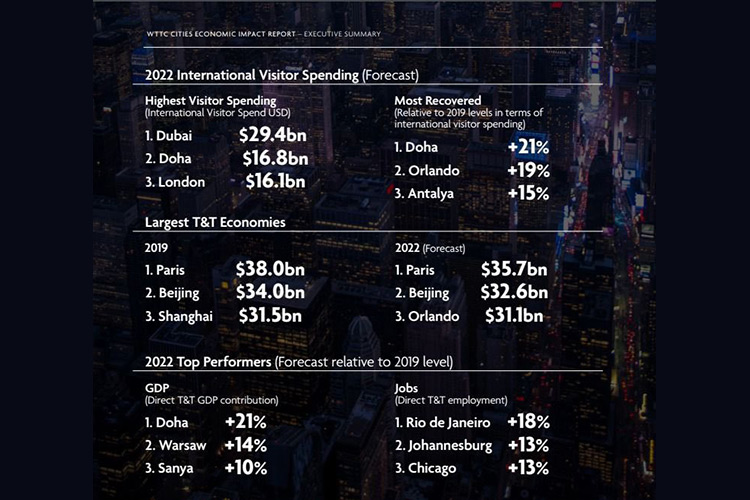 The report, which was issued in cooperation with the “Visa” company, indicated that cities continue to be centers of power in terms of global tourism, with expectations that they will lead the recovery in the sector and economies around the world.

Doha was considered one of the cities that achieved the most recovery in terms of international visitor spending, as it increased by 21%, compared to pre-pandemic levels, followed by Orlando, with an increase of 19%, then Antalya, by 15%.

Over the next decade, the tourism sector is on track to become a major driver of economic growth once again, creating 126 million new jobs worldwide. By 2032, the sector will directly provide up to 8% of all jobs in the 82 cities analyzed in the Cities Report, up from 6.6% in 2019 and 5.1% in 2020.