Miftah Ismail speaks during the interview at his office in Islamabad on Saturday. Reuters

Pakistan’s Finance Minister Miftah Ismail said on Saturday that the International Monetary Fund (IMF) has expressed concern about the country’s recently unveiled budget, but the government is confident it can make changes to satisfy the lender.

Pakistan is looking to getting a staff level agreement with the IMF this month, Miftah Ismail said.

It unveiled a Rs9.5 trillion ($47.12 billion) budget for 2022-23 on Friday aimed at tight fiscal consolidation in a bid to convince the IMF to restart much-needed bailout payments.

“There are still some concerns the IMF has about our budget and numbers and stuff like that,” Ismail said in an interview at his office in Islamabad.

He said the IMF was concerned about fuel subsidies, a widening current account deficit, and the need to raise more direct taxes.

Fuel subsides have been cut in the last two weeks, and the remaining support is expected to be removed in coming days. 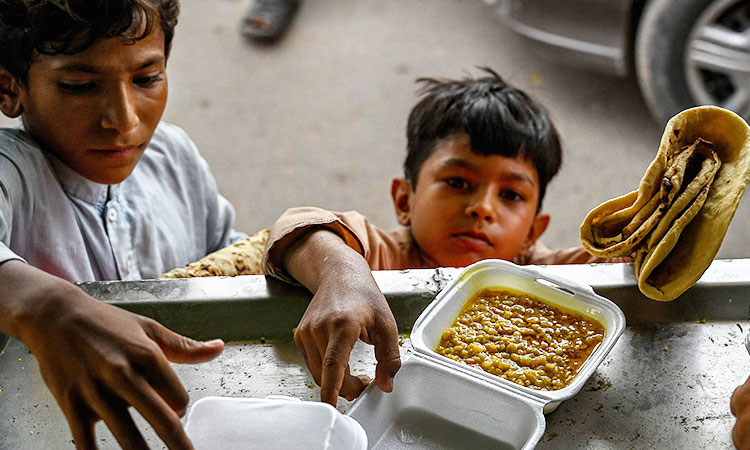 Children receive a free meal along a street in Multan. AFP

IMF’s resident representative in Islamabad did not immediately respond to a request for comment.

Ismail said Pakistan would seek to allay the concerns before the budget has to be passed by parliament. Pakistan’s financial year runs from July 1 to June 30.

“If there are some changes that we need to make to bring them onboard, we shall do so,” he said.

Pakistan is halfway through a $6 billion, 39-month IMF programme, which has stalled over the lender’s concerns over the status of some of its objectives, including fiscal consolidation.

Pakistan urgently needs funds in the face of dwindling foreign exchange reserves, which have reached $9.2 billion – enough for less than 45 days of imports.