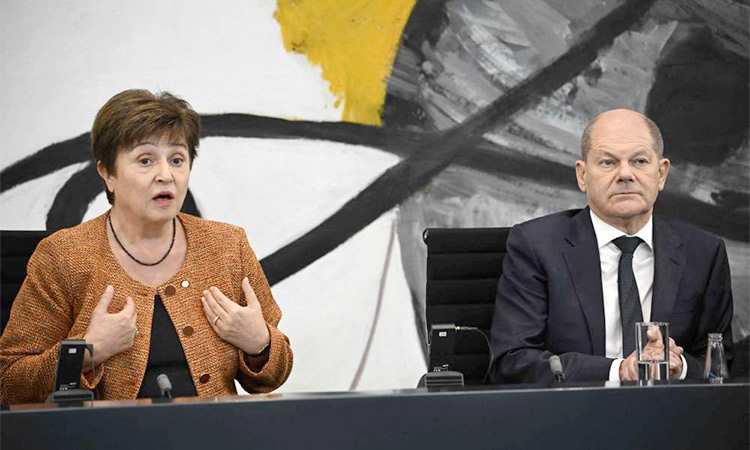 “We are already seeing the risk of aggressive tightening of US monetary policy to fight inflation, which may trigger abrupt reversals of capital flows or sharp currency depreciation,” Asakawa said in a video message broadcast at an ASEAN+3 forum held in Singapore on Friday.

Georgieva said economies comprising the Association of Southeast Asian Nations (ASEAN) are a “bright spot” in the global economy, with growth projected at 5% this year and moderating slightly in 2023.

But she warned the outlook was “exceptionally” uncertain and dominated by risks, such as the fallout from Russia’s war in Ukraine, global financial tightening and a slowdown in China’s growth.

“Another pressing global challenge is inflation. It is expected to average only 4% in Asia this year. But inflationary pressures in the region are rising,” Georgieva said.

“We don’t know how long this shock will last and whether other shocks may come. But we need to rebuild and preserve buffers and be prepared to fully use our policy tool-kit,” she told the same forum.

The fallout from China’s slowdown has been particularly painful in Asia, where factory activity slumped across the region in November.

Some emerging nations have also been forced to raise interest rates to combat capital outflows caused by US rate hikes, at the cost of hurting their fragile economies.

At the forum, Bank of Japan Governor Haruhiko Kuroda said he did not see a significant risk of Asia facing a sudden loss of confidence or a renewed financial crisis.

But he warned against complacency as some Asian countries saw their policy buffers decrease, after deploying big spending packages to counter the COVID-19 pandemic.

“As the recent market turmoil in the United Kingdom has shown, the reaction of market participants to policy decisions and announcements could signficantly impact asset prices,” said Kuroda, who was formerly head of ADB and Japan’s top currency diplomat.

“ASEAN policymakers must be vigilant” to risks and offer “clear, sufficient and timely communication to avoid unintended outcomes,” he said. Damage from Russian attacks on Ukraine’s infrastructure are increasing the amount of aid the country needs “front-loaded” ahead of the harsh winter months, the head of the International Monetary Fund said.

IMF Managing Director Kristalina Georgieva told the Reuters NEXT conference she was confident international partners would continue to provide needed support for Ukraine.

“Ukraine cannot go through this year without financial support,” she said, lauding steps being taken by Ukraine to put in place clear mechanisms to track aid flows into the country and ensure accountability for the vast sums.

She said the IMF had provided $2.7 billion in emergency financing to Ukraine and had just agreed a board monitoring program with Ukraine that would pave the way for a formal financing program.

“We at the IMF are working hard to be able to step up our own support for Ukraine,” she said. “It is a devastating situation in terms of … access to electricity, heating, water. Dark, cold, scary with bombardments going on.”

Russia’s attacks on Ukraine’s civilian infrastructure have increased the amount of budgetary assistance the country will need, adding up to $1 billion a month to previous estimates of $3 billion to $4 billion, she said.

In mid-October, before Russia began bombing cities in western Ukraine and targeting electricity and water plants, the IMF and Ukrainian authorities had projected the needed international support at $3 billion to $4 billion a month.

World Bank President David Malpass, speaking at the same conference, said the World Bank had disbursed $18 billion to Ukraine, with much of it coming from the United States and Europe.

He said he expected the projected $349 billion cost for reconstruction of Ukraine to go up “quite a bit,” given Russia’s apparent targeting of electricity grids and other infrastructure that would be expensive to replace.

“The amounts are staggering,” he said.

He said he did not detect any “donor fatigue” in the international community despite the huge cost of the war, but said there was mounting and “gigantic frustration” with Russia for continuing the war.

“It’s a grinding war, and hugely disappointing,” Malpass said, adding that Russian officials were now outcasts when they came to international meetings. Georgieva said it was critical to support the Ukrainian government as it continued to manage the economy that was still operating despite the war, and to keep financial support flowing in a steady manner.