Sheikh Abdullah Bin Zayed Al Nahyan, Minister of Foreign Affairs and International Cooperation, attended the signing of a Memorandum of Understanding (MoU) on cybersecurity between the UAE and Jamaica at Expo 2020 Dubai.

The MoU was signed by Dr Kamina Johnson-Smith, Minister of Foreign Affairs and Foreign Trade of Jamaica, and Dr Mohamed Hamad Al Kuwaiti, Head of Cybersecurity at the UAE Government.

After the signing, Sheikh Abdullah met with Dr Johnson-Smith to discuss the bilateral ties between the two friendly countries, boosting their overall cooperation, and issues of mutual concern and regional and international developments.

Sheikh Abdullah welcomed Dr Johnson-Smith and highlighted the distinguished relations between the two countries and their keenness to enhance them in all areas.

Dr Johnson-Smith highlighted Jamaica’s keenness to strengthen its cooperation and friendship with the UAE, lauding the regional and international stature of the country.

She also praised the organisation of Expo 2020 Dubai, which is hosting nearly 192 countries.

The meeting was attended by Reem Bint Ibrahim Al Hashemy, Minister of State for International Cooperation, and Director-General of Expo 2020 Dubai.

During the meeting, which was attended by Reem Bint Ibrahim Al Hashemy, Minister of State for International Cooperation and Director-General of Expo 2020 Dubai, the two sides discussed the friendship and cooperation between the UAE and Hungary and ways of advancing them. 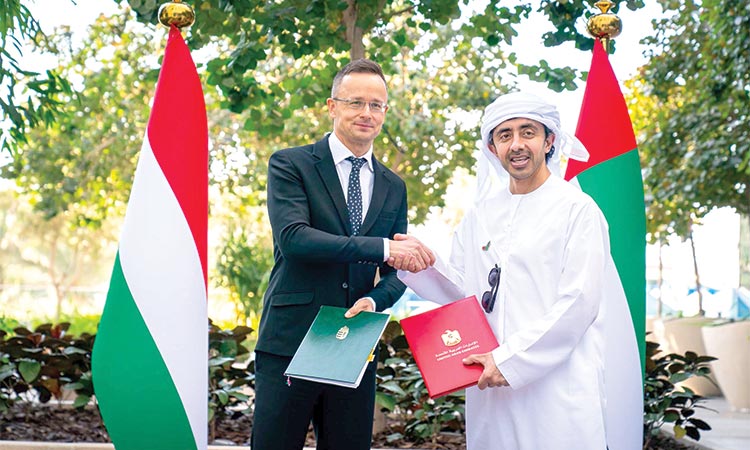 Abdullah Bin Zayed and Péter Szijjártó after signing an MoU at the Expo 2020 Dubai on Thursday.

Péter Szijjártó highlighted the deep-rooted ties between the UAE and Hungary, as well as his country’s keenness to enhance them, lauding the successful organisation of Expo 2020 Dubai and its key role in promoting international cooperation and encouraging global economic growth.

He also attended the signing of an MoU between the Ministry of Education and Hungary’s Ministry of Foreign Affairs and Trade aimed at implementing the joint programme, titled, “Stipendium Hungaricum,” from 2022 to 2024.

The MoU was signed by Hussain Ibrahim Al Hammadi, Minister of Education, and Péter Szijjártó.

Sheikh Abdullah also attended the signing of an MoU between the Ministry of Energy and Infrastructure and Hungary’s Ministry of Interior in the area of water resources management.

The MoU was signed by Suhail bin Mohammed Al Mazrouei, Minister of Energy and Infrastructure, and Péter Szijjártó.

Kosovo participation: Kosovo believes its participation at Expo 2020 Dubai is boosting the chances of getting a United Nations membership, a long-cherished dream since the country’s independence in 2008, a top official told the Emirates News Agency (WAM).

“We are very thankful for the warm hospitality and welcome Kosovo has received at the Expo 2020 Dubai and being treated equally with other 191 states in the world. When our flag is raised at Expo for six months, we see an opportunity for our country to be recognised by more world nations, which will help us become a member of the United Nations,” said Rozeta Hajdari, Kosovan Minister of Industry, Entrepreneurship and Trade.

The Western Balkan country, which was part of former Yugoslavia, has already been recognised by around 116 world nations.

“But we need recognition from more countries to get the UN membership. Many visitors [at Expo] still don’t know where Kosovo is because it’s a new state,” Hajdari added in an exclusive interview at the Kosovan Embassy in Abu Dhabi.

According to the UN membership procedures, the UN Security Council has to recommend the admission without a veto by any of the five permanent members; it will then be presented to the General Assembly for consideration. A two-thirds majority vote is necessary in the 193-member Assembly for admission of a new state.

The minister who is on a three-day official visit to UAE with a business delegation that will meet with UAE officials and attend the Kosovan National Day celebrations at the Expo on Thursday.

It is the first time Kosovo got an opportunity to participate at the Expo thanks to the UAE funding the construction of its pavilion, said Hajdari who became a minister in March 2021 in the new Kosovan government, with her 20 years of leadership experience in public life.

“Since our independence in 2008, we have been working hard to get more recognitions. The UAE was among the first countries to recognise Kosovo and we are very grateful for that.”

She believes that an event such as Expo is instrumental in getting more recognitions from other countries, which would also help Kosovo’s efforts for a membership in the European Union (EU) as well.

Hajdari has been advocating for the Euro-Atlantic integration of Kosovo.

“Our country is very much committed to Euro-Atlantic integration agenda. We already have commitments to fulfil our obligations for this. But if we get the UN membership, we would have more global acceptance and opportunities,” she said.

About Kosovo’s attempts to join the North Atlantic Treaty Organisation (NATO) she said, “I think NATO will continue to expand and one day we would be part of it.”

Before becoming a minister, Hajdari had worked with various international, regional and national organisations. She holds a Master of Science degree in Business and Economics from the University Vaxjo and is currently pursuing her doctoral program in management and Informatics at the Faculty of Economics, University of Pristina.

Spain Pavilion records 1m visitors: The Spain Pavilion at Expo 2020 Dubai has exceeded one million visits since its opening in October 2021, nearly nine per cent of the total visitors to the world fair to date.

On 15th February, the Executive Commissioner General of the Spain Pavilion, Carmen Bueno, welcomed the millionth visitor, an Irish man living in Abu Dhabi who was visiting the Expo site together with his family, according to a statement issued by the Spain Pavilion.

Speaking of the occasion, Bueno said, “The Spain Pavilion has been one of the key attractions at Expo 2020 Dubai and has received great interest from visitors from all over the world.”

Located in the sustainability district, the pavilion with motto ‘Intelligence for life,’ aims to become an example of intelligent creativity, capable of uniting people around sustainable projects in the fields of science, technology, education, and art.

Commissioned to Amann-Canovas-Maruri studio, the Spain Pavilion is an eco-friendly exhibition that seamlessly blends ancient heritage and cutting-edge innovation.

The Pavilion stands out for its enormous colourful cones, partially covered with ultralight and flexible photovoltaic panels that lead visitors to an airy ground floor containing several, naturally cooled plazas featuring, ‘Glimpses’, a series of exhibitions synthesizing some of the most relevant contributions of Spain to the global culture, highlighting some of the historical links between the country and the Arab culture.

UAE President confers Medal of Independence on Ambassador of Greece