The ongoing growth in trade between the UAE and France underscores their strong economic partnership and deep-rooted relations, supported by their leadership.

The visit of President His Highness Sheikh Mohamed Bin Zayed Al Nahyan to France also confirms the strength of the comprehensive strategic partnership between the two friendly countries.

From 2012 to 2021, the value of the non-oil trade between the UAE and France increased by 8 per cent, from Dhs23.2 billion in 2012 to over Dhs25.2 billion in 2021, according to data from Federal Competitiveness and Statistics Centre, which showed a growth of 28 per cent in trade exchange over the past year compared with 2020, amounting to Dhs19.7 million. 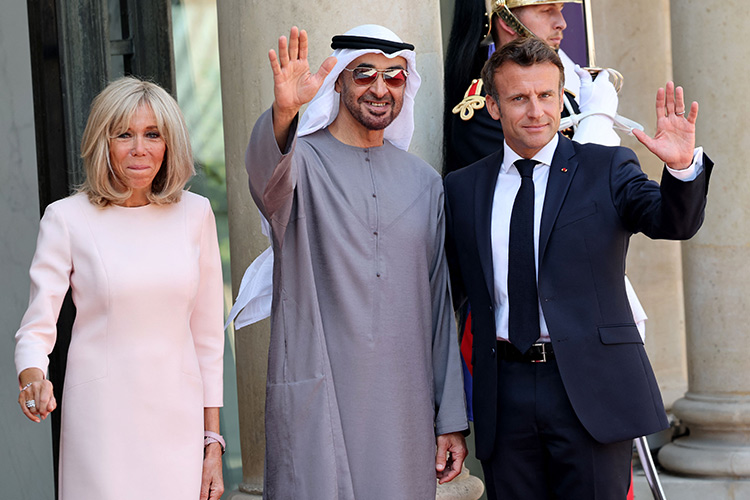 Mohamed Bin Zayed stands for a photograph with Emmanuel Macron and Brigitte Macron at the Elysee Palace. WAM

Ornaments, jewellery and related products came in the first place on the list of five leading goods imported from France in 2021, with a value of Dhs2.46 billion, followed by hand-made paintings and pictures at Dhs2.33 billion, perfumes and cosmetic water at Dhs1.73 billion, jets, propellants and gas turbines at Dhs1.37 billion, at medicines at Dhs1.3 billion.

The five leading goods exported to France in 2021 included large bottles and commodity preservation bottles valued at Dhs94.3 million, followed by hardware components at Dhs55.9 million, raw timbre at Dhs45.4 million, cigarettes and tobacco at Dhs29.5 million, and pumps and lifters for liquids at Dhs26.3 million.

The five leading goods re-exported to France in 2021 included hardware components valued at Dhs705.8 million, followed by jewellery and related products at Dhs265.8 million, tourist vehicles and personal transport vehicles at Dhs141.7 million, perfumes and cosmetic water at more than Dhs125 million, and planes, helicopters, satellite components and spacecraft at over Dhs121 million.

Moreover, the UAE-France Strategic Dialogue held its 14th meeting in Abu Dhabi in June 2022, underscoring the distinguished partnership between the two countries, following the directives of President His Highness Sheikh Mohamed and Emmanuel Macron, President of France.

In line with the ambitious 2020-2030 Emirati-French bilateral roadmap, which was adopted in June 2020, the two sides are working on boosting their cooperation in key areas, including the economy, trade, investment, oil and gas, hydrogen, nuclear energy, climate change, education, culture, health, artificial intelligence, food security and fintech.

Both sides also highlighted the importance of the “One Planet Sovereign Wealth Funds” initiative, which will be hosted by the UAE in October 2022, in addition to the “UAE-French Energy Event”, on 7th and 8th November, 2022.

Relations between the two countries dates back to the establishment of the UAE Federation, as some French petroleum company, such as “Total”, were engaged in oil exploration in the UAE, and these relations were strengthened after the first visit of the late Sheikh Zayed Bin Sultan Al Nahyan to FRANCE in 1976.

In order to enhance areas of bilateral cooperation and raise them to the levels of strategic partnership, the two countries established the UAE-FRANCE Strategic Dialogue, which began its work for the first time in 2008.

Since that time, meetings of the Dialogue Committee have been organised, and within it the two parties adopted on 3rd June 2020, a new roadmap for their strategic partnership for the next ten years, i.e. for the period 2020-2030.

The past years witnessed the signing of dozens of agreements and memoranda of understanding between the two countries in various economic, cultural, military and environmental fields, the latest of which was 13 agreements signed during the visit of the French President to the UAE last December.