A yacht docked at a port in Dubai.

In the latest report issued by the global citizenship and residency investment advisory firm Henley & Partners, the UAE topped the list of countries attracting the largest net inflows of millionaires globally in 2022.

The second quarter report “Henley Global Citizens 2022”, which tracks trends in private wealth and investment migration globally, stated that the United Arab Emirates has become a focus of great interest among wealthy investors.

The country is expected to witness the highest net inflow of them globally this year, and one of the largest ever, (4,000 millionaires), a whopping 208% increase over the net inflows of 2019 which amounted to 1,300 millionaires at the time.

In contrast, the tsunami of private capital left Russia and Ukraine, the United Kingdom lost its throne as the center of wealth, and the US’s momentum as a magnet for the world’s wealthy quickly faded, according to the report. 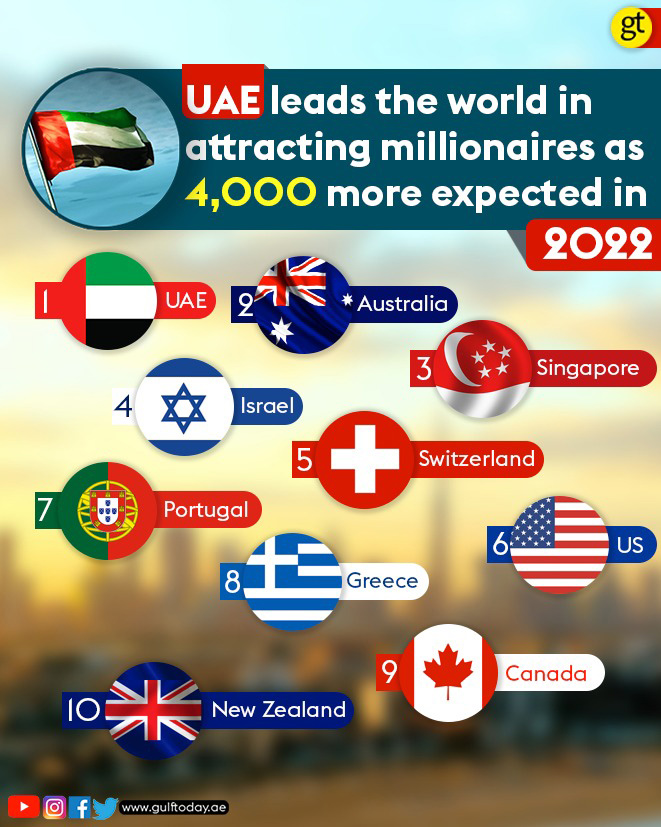 “By the end of the year, it is expected that 88,000 millionaires will have moved to new countries, 22,000 fewer than before the pandemic,” said Dr. Jörg Steffen, CEO of Henley & Partners.

Next year will witness the largest exodus of millionaires, with expected inflows of 125,000 millionaires, as wealthy investors and their families prepare seriously for the new post-Covid world order.

The UAE topped the list of ten countries expected to attract net inflows of the wealthy in 2022, followed by Australia, Singapore, Israel, Switzerland, the United States, Portugal, Greece, Canada and New Zealand.

It is also expected that large numbers of millionaires will move to Malta, Mauritius and Monaco.

While the company expected that the countries with the highest net outflows would be Russia, China, India, Hong Kong, Ukraine, Brazil, the United Kingdom, Mexico and Indonesia.

The report predicted that Ukraine would incur the largest net loss of departing millionaires in its history, (2,800 millionaires), or about 42% of its wealthy population, and an increase of 2,400 people over 2019 figures.

According to the latest data, the United Kingdom, once touted as the global financial center, continues to steadily lose millionaires, with net inflows of 1,500 millionaires expected for 2022.

This trend is not new, it began five years ago with the Brexit vote.

It is estimated that the UK has suffered a total net loss of nearly 12,000 millionaires since 2017.

The US is also becoming significantly less popular as a haven for immigrant millionaires, in part due to the threat of higher taxes.

However, the country still attracts more wealthy people than it is losing to immigration, with a net inflow of 1,500 expected in 2022, but the number still represents a staggering 86% drop from 2019 levels, which saw a net influx of millionaires of 10,800 millionaires.