Gautam Kamble, who is diagnosed with tuberculosis, holds chest x-rays during a routine consultation. AFP

When Covid-19 ripped through India in 2020-21, several million people are thought to have died. Desperate efforts to stem the pandemic hurt the battle against another huge killer: tuberculosis.

India is the home to a quarter of the world’s TB infections and an estimated half a million people died of the curable lung disease in 2020 in the South Asian nation — a third of the global toll.

Because of the pandemic, global deaths from the “silent killer” rose in 2020 for the first time in more than a decade, reversing years of progress, the World Health Organization says.

In India, the number of new cases detected in 2020 actually fell by a quarter to around 1.8 million due to Covid restrictions and as the pandemic diverted resources.

Panel discusses report on the surge of tuberculosis

Nearly two-thirds of people with TB symptoms did not seek treatment, according to a 2019-21 nationwide government survey released on World TB Day on Thursday.

Ashna Ashesh, 29, diagnosed with multidrug-resistant tuberculosis four years ago, saw how patients, many isolated and jobless because of lockdowns, struggled for support.

“They were incredibly afraid… They were reaching out for any kind of information that could be offered about how to access tests and medication,” the public health professional with the Survivors Against TB collective told AFP. 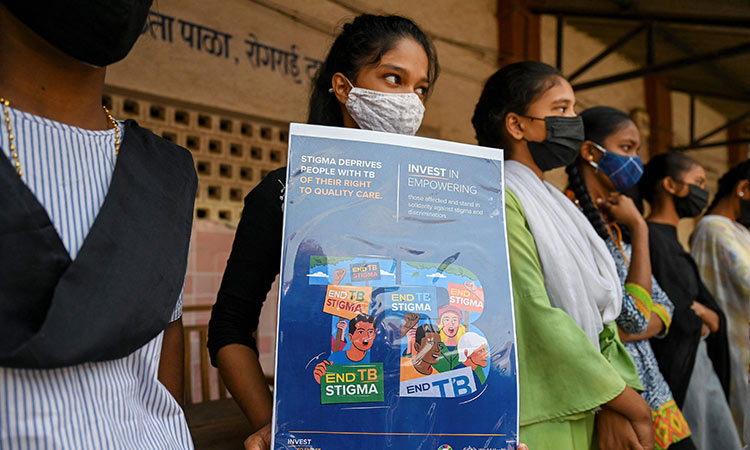 School girl holds a placard as she watches health workers perform a street play to raise awareness on the tuberculosis disease. AFP

“The impact has been immense… Covid has set back the fight against TB quite significantly. A recovery plan for TB is critical, both in India and globally.”

Experts and survivors are calling for intensive grassroots campaigns to find “missing” cases, more vaccine funding and support to combat malnutrition, a major trigger for TB.

Kuldeep Singh Sachdeva from the International Union Against Tuberculosis and Lung Disease said states need to increase services such as house-to-house visits and mass screenings.

“That’s the only way now where you can eliminate TB,” Sachdeva, who previously led the government’s National Tuberculosis Elimination Program, told AFP.

Officially Covid has killed almost 520,000 Indians, but experts believe the true toll to be far higher. 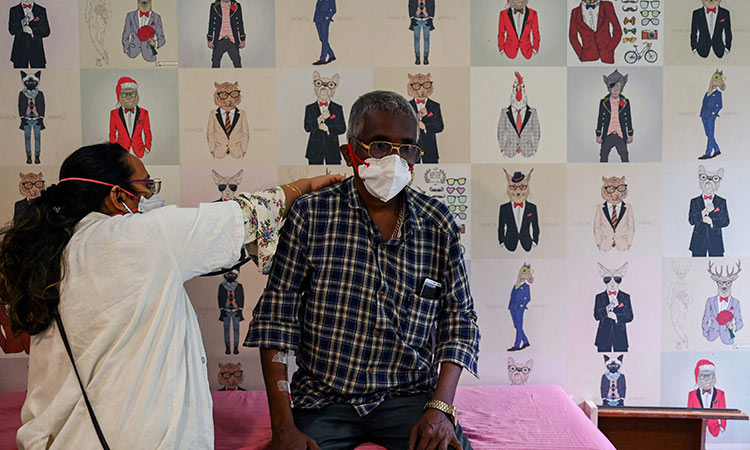 Gautam Kamble (R), who is diagnosed with tuberculosis, goes through a routine test. AFP

The pandemic — which saw Covid replace TB as the world’s deadliest infectious disease — did however have one silver lining: increased mask-wearing.

Sachdeva estimates this might have cut TB transmission by 20 percent. Additional diagnostic machines procured for Covid could be redeployed for TB, he added.

Mumbai — a megapolis of 20 million people and a TB hotspot — has rolled out a programme with young survivors such as Seema Kunchikorve, who was diagnosed with TB five years ago at 20, to keep current patients on track with medications.

“The treatment has a lot of (side) effects which patients can’t take,” Kunchikorve told AFP during a TB awareness play staged at a school in India’s biggest slum Dharavi.

Vijay Chavan, who treats patients with drug-resistant TB at a Doctors Without Borders (MSF) clinic in Mumbai, said the Covid battle had shown the way to fight the older pandemic.

At the clinic, which treats children as young as five, patients spend hours undergoing check-ups beside brightly coloured wallpapers featuring famous comic characters, before collecting a large tray of pills for their treatments.

“If there is a political will for TB, just like Covid, it definitely will give us good results,” he told AFP.