Cyclists take part in a pollution and smog awareness campaign as they ride along a street towards the Wagah border near Lahore, Pakistan, on Sunday. AFP

Cyclists in Pakistan’s smog-smothered Lahore are enduring hazardous pollution levels, abuse from drivers and social stigma in a campaign to get people to ditch their cars.

Each week around 100 adults and children, some wearing masks or scarves wrapped around their mouths and noses, jump on their bikes to cycle around landmarks in the city of more than 11 million people.

“The smog is a huge concern for us because there are so many cars now and the population has increased so much,” said Afia Khan, who joined the initiative in August. But it is an uphill challenge encouraging people to take up the environmentally friendly mode of transport, and the group often require a police escort to keep them safe in a city that lacks dedicated bicycle lanes.

Cyclists are “at the mercy of these ruthless motorbikes, chingchies (auto rickshaws) and cars” that have not embraced the idea of sharing the roads with cyclists, said Rana Sohail, the head of Clean Pakistan Green Pakistan, which launched the venture with Critical Mass Lahore. 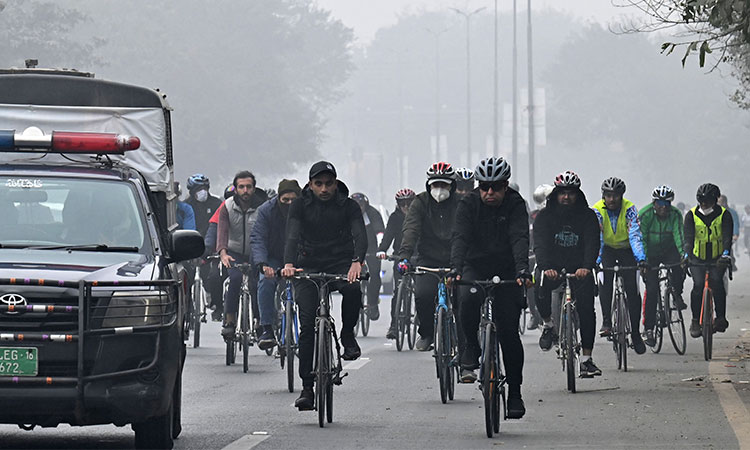 Cyclists take part in a pollution and smog awareness campaign as they ride along a street towards the Wagah border near Lahore. AFP

“The government needs to create a more cycling-friendly infrastructure,” participant Humayun Qureshi told AFP at the latest event on Sunday, which he attended with his wife and two daughters.

There is also a pervasive attitude in deeply conservative Pakistan that sport, including cycling, is inappropriate for women, who risk harassment from men.

“Going biking alone as a woman can be difficult because of the harassment you’re going to face,” Zarwa Jamal, a student who was cycling with her whole family, told AFP. “It’s truly great to be able to go with the group because I’m ensured of my safety.” 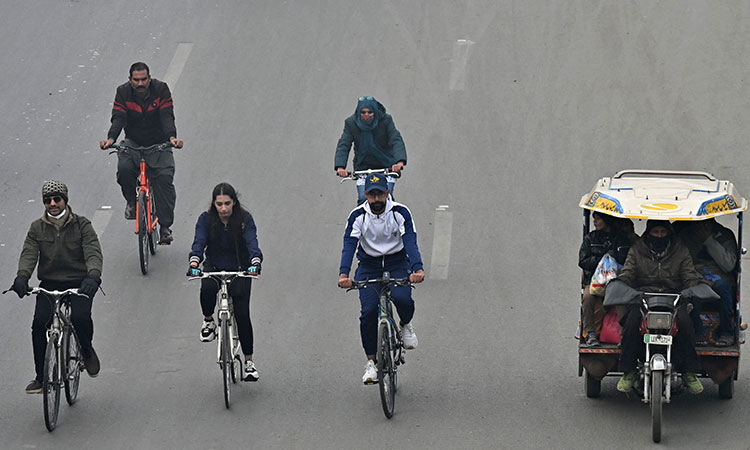 Cyclists take part in a pollution and smog awareness campaign in Lahore. AFP

Lahore consistently ranks as one of the world’s most polluted large cities, with industrial pollutants, smoke from seasonal crop burn-off, fumes from vehicles and colder winter temperatures coalescing into toxic smog.

In November a court ruling forced authorities to close schools on Fridays and Saturdays, as well as the usual Sunday break, due to high levels of air pollution.

Understanding about the terrible health impacts of smog has increased in the past few years, putting pressure on the authorities to come up with measures to tackle the problem.

“The point of reaching actual awareness is still far, but hopefully we will slowly achieve it,” said cyclist Tanzeel ur Rehman.