Dame Deborah James’ widower, Sebastien, has revealed details of the cancer campaigner and podcast host’s last moments before she died.

James died in June aged 40, six years after being diagnosed with bowel cancer.

During her final months, James was honoured with a damehood that was presented to her by the Duke of Cambridge at her family home.

She also opened the Bowel Babe Fund to raise money for cancer research. Donations to the fund surpasssed £7m following her death.

In a new interview with “The Sun,” her husband said James had passed away peacefully while holding his hand. 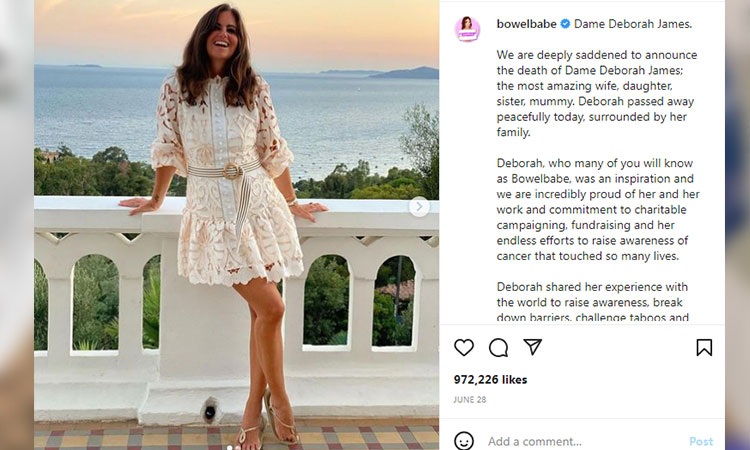 Describing their final moments together, Sebastien said: “I kissed her on the head. I told her how much I loved her, that I would look after the kids and the last thing I said to her was that I was so proud of her.

“Then she slipped away. She had an incredibly peaceful death, if there was a way to die well, then she managed it. At the very end, it was quite spiritual.”

James and Sebastien married in 2008 and have two children together, a son named Hugo, 14, and a daughter named Eloise, 12.

An intimate funeral for James took place at St Mary’s Church in Barnes, west London on 20 July, during which Sebastien and Hugo were seen carrying her coffin.

The service was attended by family and friends, including celebrities Lorraine Kelly and Giovanna Fletcher.

Kelly later revealed that James had planned her own funeral before her death.

“She is remarkable. It was beautiful, so beautiful, such a celebration of an amazing, amazing woman,” Kelly said during an appearance on “Good Morning Britain.”

“There were a lot of tears and there really was genuinely a lot of laughs too, so it was great. She planned it all and it was perfection, as you would expect.”