The equine solace to the patients does not go unnoticed by visitors at Xposure.

The special gift of a retired show horse, nicknamed ‘Doctor Peyo’, in providing comfort to terminally ill cancer patients at Calais Hospital in France, is the subject of French photographer Jeremy Lempin’s works at the ongoing sixth edition of Xposure International Photography Festival.

Lempin evocatively captures the warmth and beauty of positive engagement between humans and animals in the hospital, and the joy and peace the animal brings to patients, their families, and caregivers, even in their final moments.

The 15-year-old stallion’s ability to reduce patients’ anxiety and comfort people in pain, especially those nearing the end of life, was first noticed by his handler, Hassen Bouchakour.

Stallion Peyo is unlike any other horse. He possesses a strong character. Hassen Bouchakour first noticed this when after equestrian shows, Peyo would sometimes gently approach select people in the audience, as if he were trying to protect and comfort them. 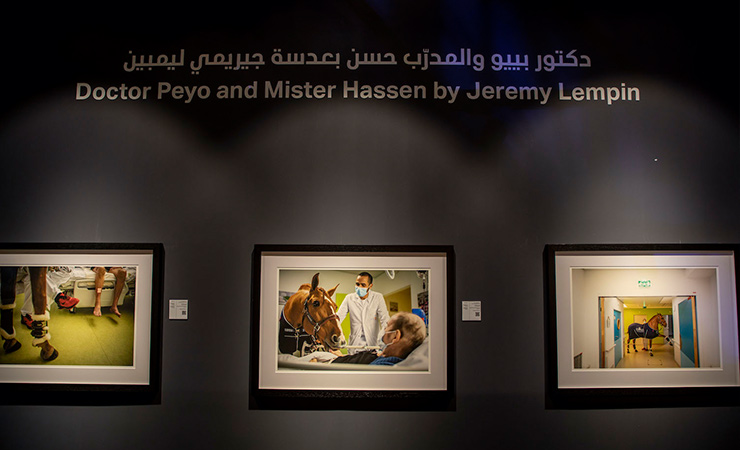 The unusual, four-legged comforter strikes a chord at the French hospital.

Bouchakour noticed that Peyo instinctively chose people who were suffering from either severe physical or emotional vulnerabilities. After four years of research, expert advice from veterinarians, and a variety of medical specialists, it was concluded that Peyo’s cerebral activity functions in a very unique way.

It was then that Bouchakour decided to take the horse to the palliative care department of the Calais hospital, where he is today considered one among the team of medical staff responsible for alleviating the pain of patients undergoing chemotherapy.

In a heartwarming heart photograph at Xposure 2022, the French photographer has captured the image of the horse gently nuzzling a mother with metastatic cancer as she hugs her 7-year-old son.

In another shot, Lempin shows the horse attending therapy sessions with Daniel, a former equestrian, who seems to forget his pain as he hugs the horse. Following Daniel’s death early last year, Peyo accompanied his coffin at the funeral.

Peyo’s dedication to his ‘job’ is evident in an image where he comforts a post-op patient with her 9-year-old son, Isaac, on his back. Isaac is happy and proud as he introduces his mother to his new friend, Peyo. It is an unforgettable moment, says her husband Thomas, because despite her pain, she has a big smile on her face.

New studies indicate that animals have a positive impact on patients undergoing treatment for severe illnesses. Animal-assisted therapy benefits both patients and their caregivers as they cope with the pain and stress of their treatment journeys and are used in many clinical environments.