Hailey Bieber poses for a photograph.

Hailey Bieber is currently in hospital after suffering “stroke-like symptoms” from a “small blood clot” in her brain.

The 25-year-old model was admitted to a hospital near Palm Springs several days ago for a brain-related condition, according to the Independent.

In an Instagram Story on Saturday (12 March), she told fans: “On Thursday morning, I was sitting at breakfast with my husband when I started having stroke like symptoms and was taken to the hospital.

“They found I had suffered a very small blood clot to my brain, which caused a small lack of oxygen, but my body had passed it on its own and I recovered completely within a few hours.” 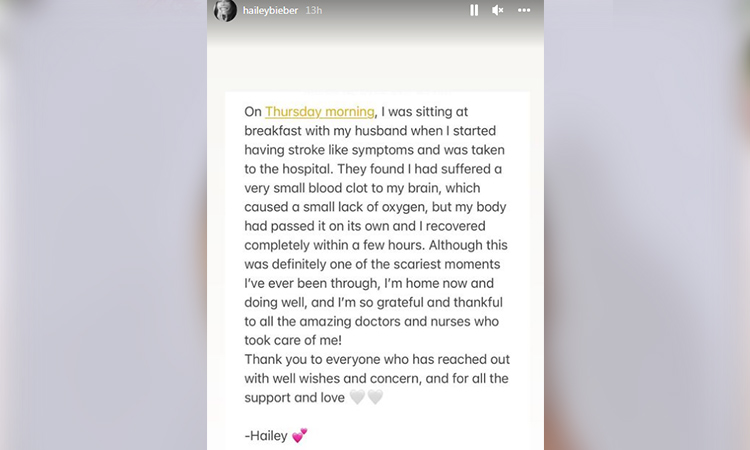 Bieber, who is married to singer Justin Bieber, said she is now in better health.

“Although this was definitely one of the scariest moments I’ve ever been through, I’m home now and doing well, and I’m so grateful and thankful to all the amazing doctors and nurses who took care of me!” she wrote.

“Thank you to everyone who has reached out with well wishes and concern, and for all the support and love..”

It is not know what caused Bieber’s illness.

Last month, Bieber said that she would not be publicly speaking about her private life anymore, saying she has no interest in doing any more interviews that are about her husband or her personal life.

“It doesn’t feel worth it to me anymore when I try to have an open conversation with someone like you and then it gets taken out of context,” she explained. “The media loves to take a tiny little blurb of something for clickbait. The media has always been a disgusting thing.”

More than 12 sports events taking place in Dubai this weekend