Mandy Moore poses for a photograph.

Mandy Moore has revealed she will have to give birth to her second child without an epidural this autumn.

The “This is Us” star told TODAY Parents on Friday that she will have to “push forth” with the birth without the anaesthetic due to suffering from from immune thrombocytopenic purpura (ITP).

Moore, 38, already gave birth to her 17-month-old son Gus without medication due to the condition, an experience she described as “awful”.

“My platelets are too low for an epidural,” Moore said. “It was awful. But I can do it one more time. I can climb that mountain again.” 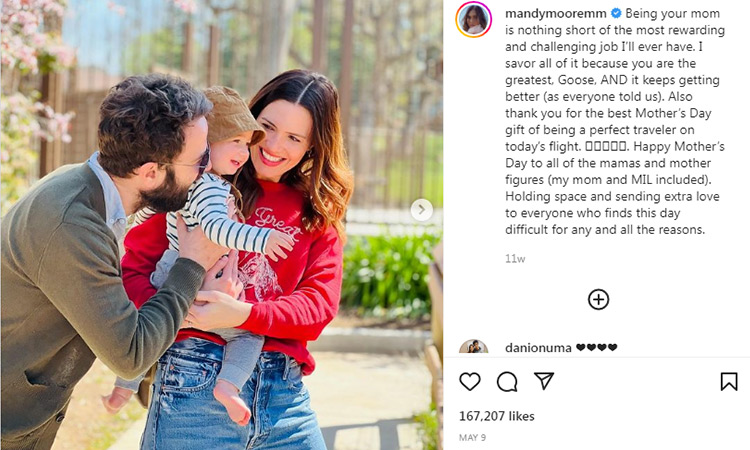 She continued: “I wish medication was an option – just the idea of it being on the table is so nice. But we’ll just push forth like we did last time.”

The NHS describes those that suffer from ITP as having a shortage of platelets. Having low platelets does not make you feel any different and most sufferers have no symptoms at all.

However, should a person’s platelet count fall to very low levels, symptoms become more likely – and range from brusing easily and bleeding for longer, to purpura – having small red or purple spots on the skin – and anaemia.

In June, Moore revealed she and her husband, Taylor Goldsmith, were set to become parents again.

She wrote on Instagram, referencing the hit NBC show’s finale: “One incredibly seminal chapter of my life just ended.

“The next one, as a mother of two, is about to start … and are we ever so deeply grateful and excited,” she continued.

“Baby Boy Goldsmith #2 coming this fall! Tour is gonna be slightly different than I expected but I can’t wait.”

Shortly after the couple announced the news, Moore was forced cancel the rest of her “In Real Life Tour” after struggling to balance her pregnancy with her rigourous schedule.

“When we booked these shows, I wasn’t pregnant and although I truly thought I could power through, the way we are traveling (long hours on the bus and not getting proper rest) has caught up, taken its toll, and made it feel too challenging to proceed,” she wrote on Instagram. “

“I know that I have to put my family and my health (and the health of my baby) first and the best place for me to be right now is at home.”