Millions sweltered in an early summer heatwave across India and Pakistan on Thursday, leading to power and water shortages as annual furnace-like temperatures hit South Asia.

In New Delhi, a burning rubbish dump choked residents for a third day with temperatures crossing 45˚C in parts of South Asia on Thursday — several degrees higher than normal — and forecasters warning that it will get even hotter this weekend.

Heatwaves have killed over 6,500 people in India since 2010, and scientists say climate change is making them harsher and more frequent across the region.

“This is the first time I’ve seen such horrible weather in April. Usually, we’re prepared for this in May and onwards,” said 30-year-old Delhi housewife Somya Mehra, as she and her family thirstily searched for a cold drink.

“Today we stepped out because of our anniversary but otherwise I’m not stepping out at all. I’ve stopped sending my kid out to play.”

Heatwave to last at least three more days in India

A senior scientist at the India Meteorological Department said on Friday heat conditions would persist for at least the next three days, but that temperatures would fall after the arrival of monsoons, expected in some parts by May.

The health problems triggered by the heatwave were posing a bigger worry than the expected fourth wave of COVID-19, doctors in India said. 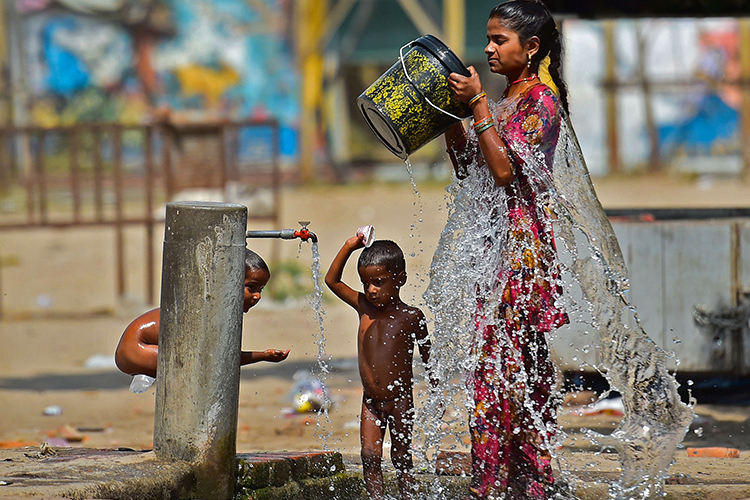 A woman along with a child takes a bath from a roadside tap on a hot summer day in Allahabad. AFP

“We are getting many patients who have suffered heatstroke or other heat-related problems,” said Mona Desai, former president of Ahmedabad Medical Association in the western Indian state of Gujarat.

She said that 60-70% of the patients were school-aged complaining of vomiting, diarrhoea, abdominal colic, weakness and other symptoms.

Roads were deserted in Bhubaneshwar, in India’s eastern state of Odisha, where schools have been shut, while neighbouring West Bengal advanced the school summer break by a few days.

The Indian states of Rajasthan, Gujarat and Andhra Pradesh imposed power cuts on factories as consumption for air conditioning and fans skyrocketed. 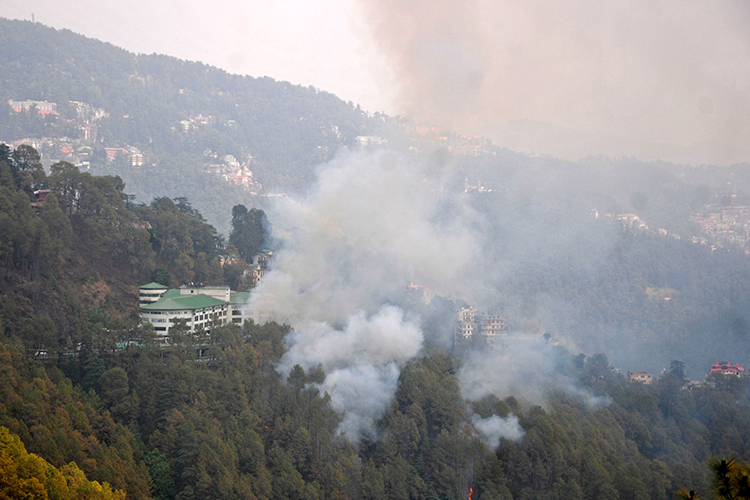 Smoke billows from a forest fire on a hot summer day at Shimla in Himachal Pradesh state. AFP

Media reports said that power stations were also facing shortages of coal — the main source of electricity in the nation of 1.4 billion people.

Many regions also reported falling water supplies that will only worsen until the annual monsoon rains in June and July.

Water shortages will hit farmers hardest, including those growing wheat as India aims to boost exports to help ease a global shortage due to the war in Ukraine.

Temperatures are expected to be up to eight degrees higher than usual in parts of Pakistan, with the mercury peaking at 48 degrees in parts of rural Sindh on Wednesday, Pakistan’s Meteorological Society warned.

Farmers have to use water sparingly in a country where agriculture is the mainstay of the economy and accounts for around 40 per cent of the workforce.

“Public health and agriculture in the country will face serious threats due to the extreme temperature this year,” Climate Change Minister Sherry Rehman said. 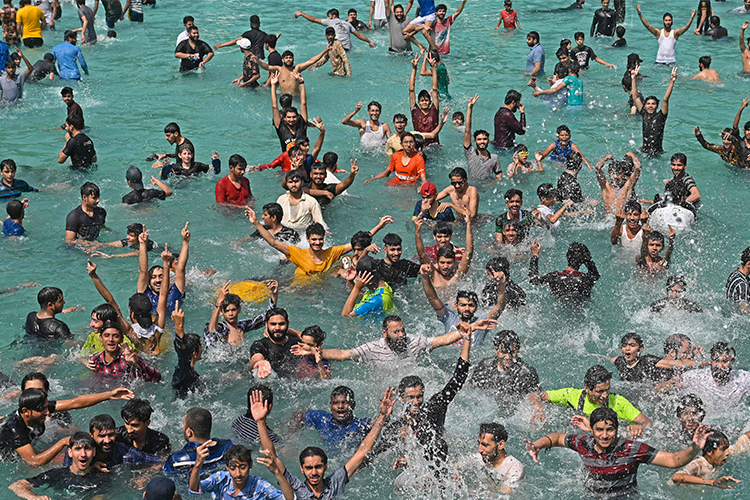 People cool off at a swimming pool during a hot summer day in Lahore. AFP

“South Asia, particularly India and Pakistan are faced with what has been a record-breaking heatwave. It started in early April and continues to leave the people gasping in whatever shade they find,” Sherry said in a statement.

More than a billion people are at risk of heat-related impacts in the region, scientists have warned, linking the early onset of an intense summer to climate change. For the first time in decades, Pakistan had gone from winter to summer without the spring season, Sherry said.

The government has also told provincial disaster management authorities to prepare urgently for the risk of flash-flooding in northern mountainous provinces due to rapid glacial melting, Sherry said.

Last month was the hottest March on record since 1961, the Pakistani Met office said.

Coming during the month of Ramadan, the heat makes fasting in both India and Pakistan even tougher for Muslims — who shun even water during daylight hours.

Glaciers in the Himalaya, Hindu Kush and Karkoram mountain ranges have melted rapidly, creating thousand of glacial lakes in northern Pakistan, around 30 of which were at risk of sudden hazardous flooding, the climate change ministry said, adding around 7 million people were vulnerable.

“Temperatures are rising rapidly in the country, and rising much earlier than usual,” Indian Prime Minister Narendra Modi said on Wednesday, adding that India has seen “increasing incidents of fires in various places — in forests, important buildings and in hospitals — in the past few days.”

In New Delhi, a 60-metre (200-feet) high rubbish mountain has been ablaze since Tuesday, which firefighting teams have been battling with lorry-loads of sand and mud.

The inferno, belching toxic black smoke that engulfed nearby districts, was the fourth such incident at a landfill site in the megacity of 20 million people in less than a month.

Pradeep Khandelwal, the former head of Delhi’s waste management, said they were likely sparked by warmer temperatures speeding up the decomposition of organic waste.

“The dry and hot weather produces excess methane gas at the dumping sites that trigger such fires,” Khandelwal told AFP.

“Before human activities increased global temperatures, we would have seen the heat that hit India earlier this month around once in 50 years,” said Mariam Zachariah from the Grantham Institute at Imperial College London.

“But now it is a much more common event — we can expect such high temperatures about once in every four years. And until net emissions are halted, it will continue to become even more common”.