This photo from the Twitter handle of Foreign Office shows a batch of 104 Pakistani students on a train that runs between Kharkiv to Lviv.

The Pakistan embassy in Ukraine stated on Sunday that Ambassador Dr Noel Khokhar met the deputy internal affairs minister of Ukraine to discuss the facilitation of evacuation for Pakistani citizens from the war-hit country, Express Tribute reported.

A statement released by the embassy stated that they had requested a meeting with the commander of border points for the Ukraine-Poland border to highlight the issue of Pakistanis stuck on the Ukrainian side awaiting exit.

As the Russia-Ukraine conflict escalates, the embassy has provided updates regarding their evacuation efforts. The body stated that 125 Pakistani citizens have been successfully evacuated so far, while 376 have reached the Ukraine-Poland border, four are at the Ukraine-Romania border and nine at the Ukraine-Hungary border. 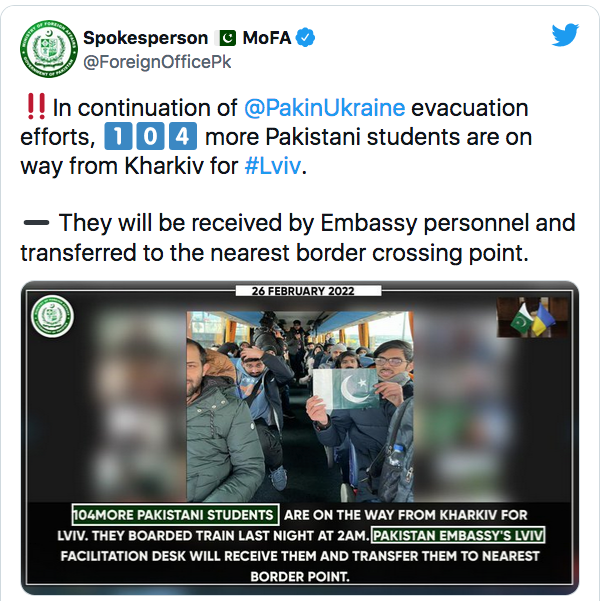 Two Pakistan International Airlines (PIA) aircraft would fly to Poland later on Sunday to evacuate the Pakistanis stranded because of the ongoing war in Ukraine, a spokesperson for the national-flag carrier said.

Spokesperson Abdullah Hafeez said that the PIA had drawn up a flight plan to evacuate Pakistani nationals. “The preparations have been made to send two flights to Poland from Pakistan on Sunday,” he said, adding that the departure of flights depended on the arrival of Pakistani citizens in Poland.

According to the statement, the Pakistan mission has been providing accommodation to students in Ternopil and transportation wherever possible, especially from Lviv to the border crossings.

Due to the increased conflict, the embassy stated that “there is no safe place in Ukraine” and the Ternopil district administration issued a warning on Saturday to civilians to keep lights off.

Furthermore, Pakistanis are being evacuated from Ternopil and Lviv to Poland, Hungry, Slovakia and Romania as the embassy is coordinating with respective Pakistan missions.

Data provided by the embassy states that 35 students from Kharkiv have been received by Lviv Facilitation Desk alongside three students from other cities.

Thirty students from Kharkiv are currently in transit to Lviv via train, which is estimated to arrive later in the afternoon, while seven students have reached Ternopil.

The Pakistan embassy of Ukraine reiterated its resolve to conduct all possible efforts to ensure the safe evacuation of Pakistani citizens.