Villagers carry their belongings on a banana raft and wade through floodwaters in Korora village, India, on Friday. AP

In India’s Assam state, at least nine people died in the floods and two million others saw their homes submerged in floodwaters, according to the state disaster management agency.

One dead in India unrest over military hiring; some gatherings banned

Lightning in parts of Bangladesh killed nine people on Friday.

Both countries have asked the military to help with the severe flooding, which could worsen because rains are expected to continue over the weekend.

The Brahmaputra, one of Asia’s largest rivers, breached its mud embankments, inundating 3,000 villages and croplands in 28 of Assam’s 33 districts. 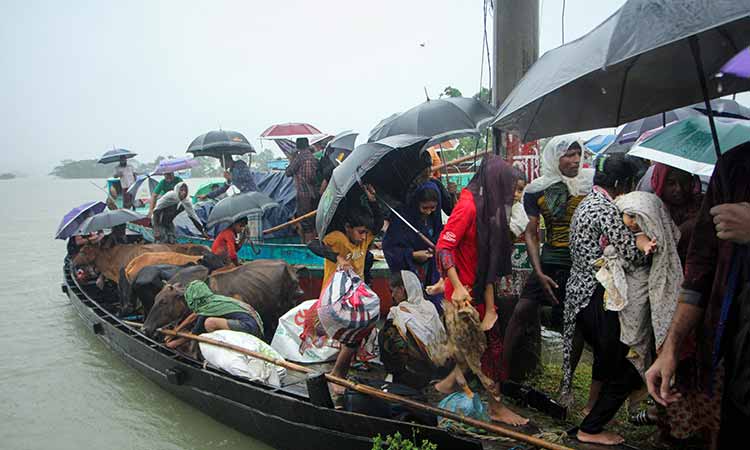 “We expect moderate to heavy rainfall in several parts of Assam till Sunday. The volume of rainfall has been unprecedented,” said Sanjay O’Neil, an official at the meteorological station in Gauhati, Assam’s capital.

Several train services were cancelled in India amid incessant rains over the past five days. In southern Assam’s Haflong town, the railway station was under water and flooded rivers deposited mud and silt along the rail tracks.

India’s army has been asked to help other disaster response agencies rescue stranded people and provide food and essentials to those whose houses are submerged under floodwaters.

“We are using speedboats and inflatable rafts to rescue flood-hit people,” an army official said.

In Bangladesh, districts near the Indian border have been worst affected. 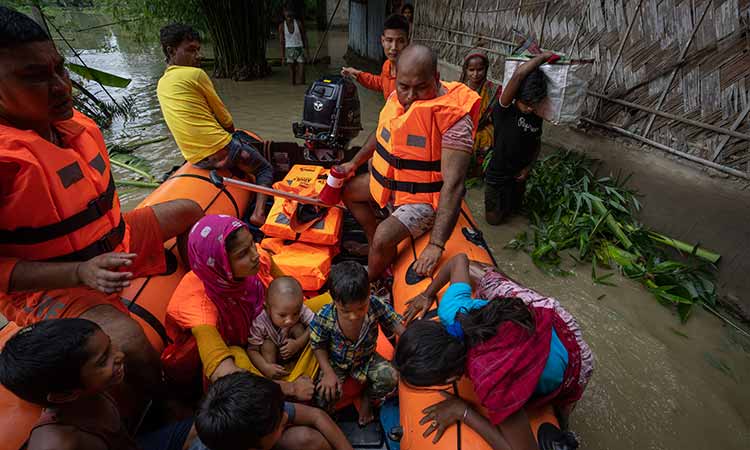 Water levels in all major rivers across the country were rising, according to the flood forecasting and warning center in Dhaka, the nation’s capital. The country has about 130 rivers.

The center said the flood situation is likely to deteriorate in the worst-hit Sunamganj and Sylhet districts in the northeastern region as well as in Lalmonirhat, Kurigram, Nilphamari and Rangpur districts in northern Bangladesh.

Flight operations at the Osmani International Airport in Sylhet have been suspended for three days as floodwaters have almost reached the runway, according to Hafiz Ahmed, the airport manager.

Last month, a pre-monsoon flash flood, triggered by an onrush of water from upstream in India’s northeastern states, hit Bangladesh’s northern and northeastern regions, destroying crops and damaging homes and roads. The country was just starting to recover from that shock when fresh rains flooded the same areas again this week.

Bangladesh, a nation of 160 million people, is low-lying and faces threats from climate change-related natural disasters such as floods and cyclones. According to the UN’s Intergovernmental Panel on Climate Change, about 17% of people in Bangladesh would need to be relocated over the next decade or so if global warming persists at the present rate.