Migrants arrive on Spanish soil after crossing the fences from Morocco in Melilla, Spain, Friday. AP

At least 18 African migrants died when a huge crowd tried to cross into the Spanish enclave of Melilla in northern Morocco, according to an update from Moroccan authorities.

Around 2,000 migrants approached Melilla at dawn on Friday and more than 500 managed to enter a border control area after cutting a fence with shears, the Spanish government’s local delegation said in a statement.

Moroccan officials said late on Friday that 13 migrants had died of injuries sustained in the incursion, in addition to five who were confirmed dead earlier in the day.

“Some fell from the top of the barrier” separating the two sides, a Moroccan official said, adding that 140 security personnel and 76 migrants were injured during the attempt to cross. 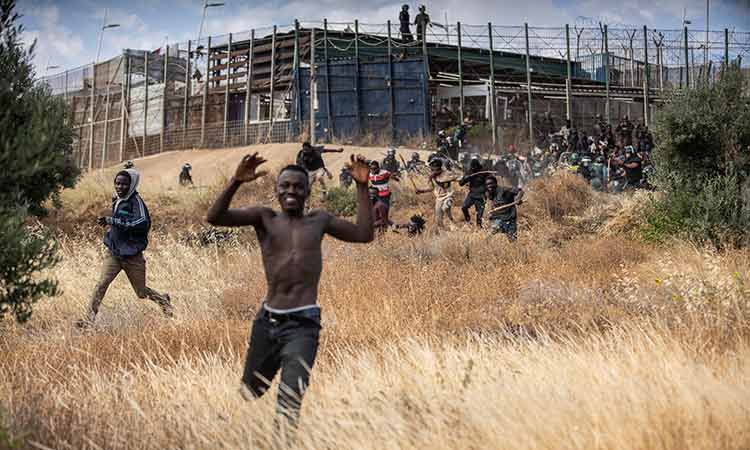 Migrants run on Spanish soil after crossing the fences from Morocco in Melilla, Spain, on Friday. AP

The Spanish Civil Guard, which monitors the other side of the fence, said it had no information on the tragedy and referred enquiries to Morocco.

The border of the Spanish enclave and the neighbouring Moroccan city of Nador were calm early Saturday, without police deployment, AFP journalists said.

Morocco had deployed a “large” number of forces to try to repel the assault on the border, who “cooperated actively” with Spain’s security forces, it said earlier in a statement.

Images on Spanish media showed exhausted migrants lying on the pavement in Melilla, some with bloodied hands and torn clothes.

Speaking in Brussels, Spanish Prime Minister Pedro Sanchez condemned the “violent assault”, which he blamed on “mafias who traffic in human beings”.