Four-year-old Tim Fiorito Quintella cries on his father’s lap before getting a shot of the CoronaVac vaccine in Rio de Janeiro, Brazil, on Friday. AP

About 25 million children worldwide have missed out on routine immunizations against common diseases like diptheria, largely because the coronavirus pandemic disrupted regular health services or triggered misinformation about vaccines, according to the UN.

In a new report published on Friday, the World Health Organisation (WHO) and UNICEF said their figures show 25 million children last year failed to get vaccinated against diptheria, tetanus and pertussis, a marker for childhood immunisation coverage, continuing a downward trend that began in 2019.

“This is a red alert for child health,” said Catherine Russell, UNICEF’s Executive Director. “We are witnessing the largest sustained drop in childhood immunisation in a generation,” she said, adding that the consequences would be measured in lives lost. 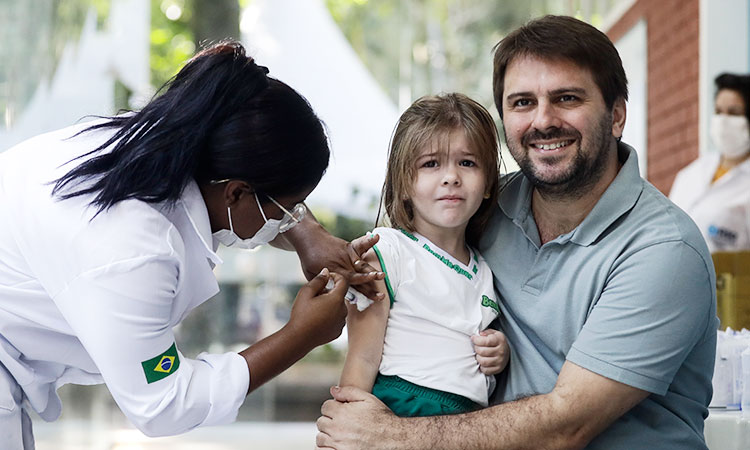 Four-year-old Maite Pimentel is held by her father as she gets a dose of the CoronaVac vaccine in Rio de Janeiro. AP

Data showed the vast majority of the children who failed to get immunised were living in developing countries, namely Ethiopia, India, Indonesia, Nigeria and the Philippines. While vaccine coverage fell in every world region, the worst effects were seen in East Asia and the Pacific.

Experts said this “historic backsliding” in vaccination coverage was especially disturbing since it was occurring as rates of severe malnutrition were rising. Malnourished children typically have weaker immune systems and infections like measles can often prove fatal to them.

“The convergence of a hunger crisis with a growing immunisation gap threatens to create the conditions for a child survival crisis,” the UN said.

Scientists said low vaccine coverage rates had already resulted in preventable outbreaks of diseases like measles and polio. In March 2020, WHO and partners asked countries to suspend their polio eradication efforts amid the accelerating COVID-19 pandemic. There have since been dozens of polio epidemics in more than 30 countries.

“This is particularly tragic as tremendous progress was made in the two decades before the COVID pandemic to improve childhood vaccination rates globally,” said Helen Bedford, a professor of children’s health at University College London, who was not connected to the UN report. She said the news was shocking but not surprising, noting that immunisation services are frequently an “early casualty” of major social or economic disasters.

Dr David Elliman, a consultant pediatrician at Britain’s Great Ormond Street Hospital for Children, said it was critical to reverse the declining vaccination trend among children.

“The effects of what happens in one part of the world can ripple out to affect the whole globe,” he said in a statement, noting the rapid spread of COVID-19 and more recently, monkeypox. “Whether we act on the basis of ethics or ‘enlightened self interest’, we must put (children) top of our list of priorities.”

US President Biden toils to put pandemic behind him