Rescue team assist a saved passenger from a ferry, which sank in bad weather off the coast of Indonesia. AFP

Thirty-one people have been rescued and 11 are still missing after a ferry ran out of fuel and sank in bad weather off the coast of Indonesia, an official said Monday.

Local tugboats and fishermen brought many of the survivors ashore after the KM Ladang Pertiwi sank while sailing through the Makassar strait in South Sulawesi province on Thursday.

“Until now 31 people have been rescued alive and we are still looking for 11 more people who are still missing,” head of local search and rescue team Djunaidi, who like some Indonesians goes by only one name, told the media on Monday.

“They have returned home now and they are generally in good health,” he added. 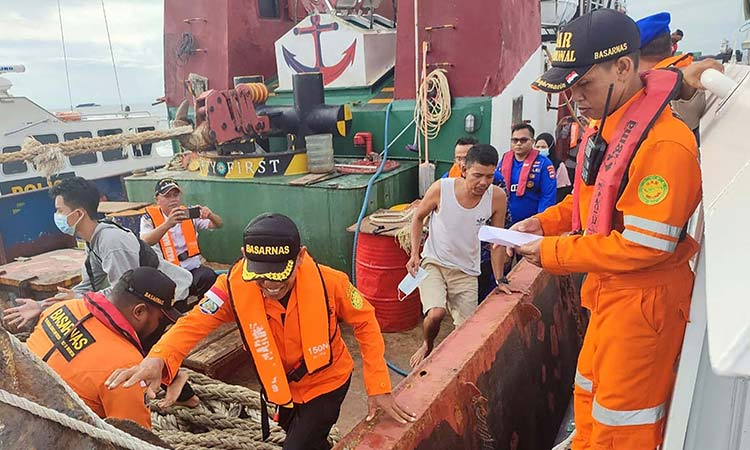 Rescuers have deployed a helicopter and extended the search area to 20 nautical miles from where the boat sank in the search for the missing, Djunaidi said.

The vessel did not have a permit to transport passengers, he added, and both the ship’s captain and owner have been taken in for questioning.

No official passenger manifest was kept — common in a country where crews sometimes sell illegal tickets past the ships’ official capacity — but authorities have said they believe there were 42 people onboard when the boat sank.

Marine accidents are common in the Southeast Asian archipelago of around 17,000 islands, where safety standards are often lax.

In May, a ferry carrying more than 800 people ran aground in shallow waters off East Nusa Tenggara province and remained stuck for two days before being dislodged. No one was hurt.

In 2018 more than 150 people drowned when a ferry sank in one of the world’s deepest lakes on Sumatra island.