Liza poses for a family photograph with her mother Iryna Dmytrieva. File.

In any conflict, it is the children who end up suffering the most. Many of them perish in the attacks. In Syria, for instance, in 2016 alone over 600 kids died, more than the number in 2015.

The war has turfed out from their homes in South Sudan more than 2 million children, who had to flee the nation.

Liza, a 4-year-old girl with Down syndrome, was on her way to see a speech therapist with her mother in central Ukraine when a Russian missile bombarded her path.

She perished instantly, never making it to the appointment. Now the moving images that tell the story of her life and its end are striking a chord worldwide.

Wearing a blue denim jacket, Liza was among 23 people killed, including boys aged 7 and 8, in Thursday’s missile strike in Vinnytsia. Her mother, Iryna Dmytrieva, was among those badly hurt.

Sadly, after the blast, the mother and daughter had to take different paths: Iryna, 33, went into a hospital’s intensive care unit while Liza went to a morgue. 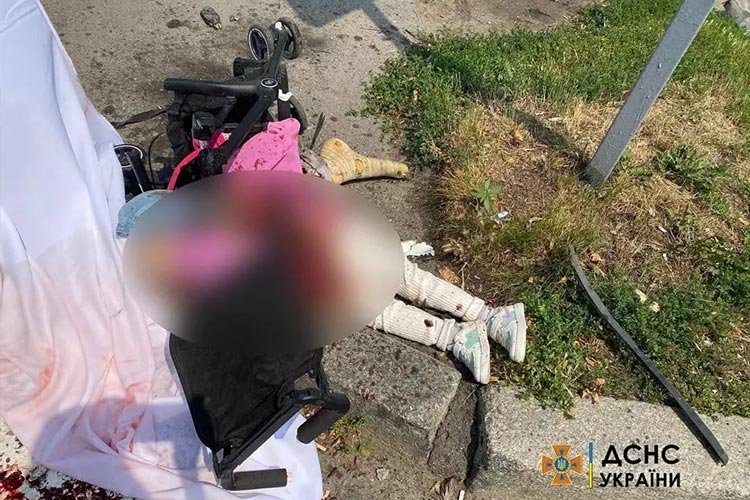 Liza’s body lies at the site of the missile strike in Vinnytsia. File

She was reaching out for her daughter, but it did not help. The mother was robbed of her most precious possession.

Shortly before the explosion, Iryna had posted a video on social media showing her daughter straining to reach the handlebars to push her own pram, totally chuffed with the world, happily walking through Vinnytsia, wearing the jacket and white pants, with a nice hairclip. Clearly, Another video on social media showed the little girl twirling in a lavender dress in a field of lavender.

The fun soon came to a tragic end: after the Russian missile strike it was her lifeless body that was lying on the ground next to her blood-stained pram.

Ukrainian President Volodymyr Zelensky’s wife posted that she had met this “wonderful girl” while filming a Christmas video with a group of children who were given oversized ornaments to paint.

“The little mischievous girl then managed in a half an hour to paint not only herself, her holiday dress, but also all the other children, me, the cameramen and the director … Look at her alive, please,” Olena Zelenska wrote in a note accompanying the video.

When the war began,  Iryna and her family fled the capital, for Vinnytsia, over 150 miles away. She thought it was safe, which, tragically, turned out to be an error of judgement.

Liza was born when her mother was 29, but with a heart defect, which was rectified, and Down syndrome.

Her great-aunt recalls that despite her Down syndrome, “Lisa was a very bright child. She knew how to draw, spoke, always helped adults and always smiled. Always cheerful.”Tor her mother, Liza was the greatest gift of her life.

“She loved her infinitely,” said the great-aunt.

The explosion area has been cordoned off. People come to leave flowers, candles and teddy bears. Many were heartbroken.

“Innocent children die,” said Kateryna Kondratyuk, bursting into tears at the explosion scene.
And that is the sad truth.