Anti-coup protesters clash with a riot police vehicle during a demonstration against military rule in Khartoum, Sudan, on Thursday. AFP

Five protesters were shot dead in Sudan on Thursday, medics said, as large crowds took to the streets despite heavy security and a communications blackout to rally against the military leadership that seized power eight months ago.

In central Khartoum, security forces fired tear gas and water cannon as they tried to prevent swelling crowds from marching towards the presidential palace, witnesses said.

They estimated the crowds in Khartoum and its twin cities of Omdurman and Bahri to be at least in the tens of thousands, and to be the largest this year. In Omdurman, witnesses reported tear gas and gunfire as security forces prevented protesters from crossing into Khartoum.

The protests in the capital and other cities marked the third anniversary of huge demonstrations during the uprising that overthrew long-time autocratic ruler Omar Al Bashir and led to a power-sharing arrangement between civilian groups and the military.

Last October, the military led by General Abdel Fattah Al Burhan toppled the transitional government, triggering rallies that have called on the army to quit politics. “Even if we die, the military will not rule us,” protesters chanted, urging the reversal of an October military coup.

Two of the four were shot dead by “bullets to the chest,” and another by “a bullet to the head,” the medics said, reporting the deaths on Thursday took the toll to 108 from months of protest-related violence.

“Down with Burhan’s rule,” crowds chanted, with protests and violence flaring in both the capital Khartoum and its suburbs, including the twin city of Omdurman. 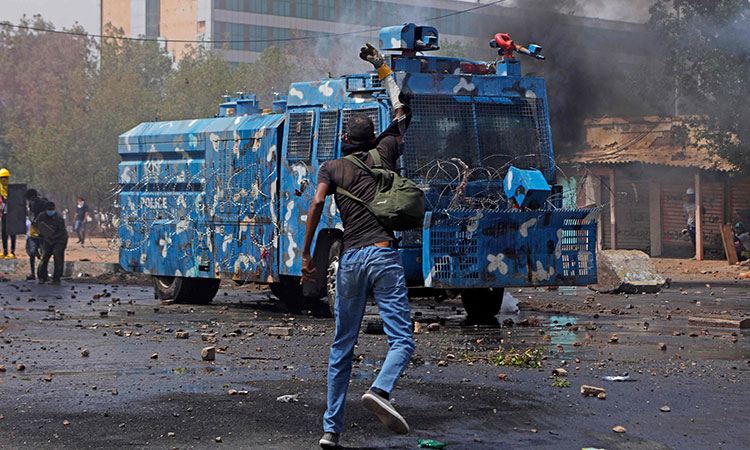 Anti-coup protesters clash with security forces during a demonstration against military rule in Khartoum. AFP

Medics also reported “several attempts to storm hospitals in Khartoum,” with security forces firing tear gas into one hospital, where some of those injured during the protests had been taken.

Some of Thursday’s protesters carried banners calling for justice for those killed in previous demonstrations. Others chanted, “Burhan, Burhan, back to the barracks and hand over your companies,” a reference to the military’s economic holdings.

Earlier, protesters barricaded some of Khartoum’s main thoroughfares with stones and burning tyres.

June 30 also marks the day Bashir took power in a coup in 1989. “Either we get to the presidential palace and remove Al Burhan or we won’t return home,” said a 21-year-old female student protesting in Bahri.

It was the first time in months of protests against the October coup that internet and phone services had been cut. After the military takeover, extended internet blackouts were imposed in an apparent effort to weaken the protest movement.

Staff at Sudan’s two private sector telecoms companies, speaking on condition of anonymity, said authorities had ordered them to shut down the internet once again on Thursday.

Phone calls within Sudan were also cut and security forces closed bridges over the Nile linking Khartoum, Omdurman and Bahri – another step typically taken on big protest days to limit the movement of marchers. In recent days there have been daily neighbourhood protests.

On Wednesday, medics aligned with the protest movement said security forces shot dead a child during protests in Bahri.

Thursday’s five deaths, four in Omdurman and one in Khartoum, brought the number of protesters killed since the coup to 108.

There were large numbers of injuries and attempts by security forces to storm hospitals in Khartoum where they were being treated, the Central Committee of Sudanese Doctors said. There was no immediate comment from Sudanese authorities.

The United Nations envoy in Sudan, Volker Perthes, called this week on authorities to abide by a pledge to protect the right of peaceful assembly. “Violence against protesters will not be tolerated,” he said.

Military leaders said they dissolved the government in October because of political paralysis. As a result, however, international financial support agreed with the transitional government was frozen and an economic crisis has deepened.