An Indian national based in Oman was announced as the latest $1 million winner in the Dubai Duty Free Millennium Millionaire draw held on Wednesday at Concourse D of Dubai International Airport.

John Varghese, a 62-year-old Indian national based in Muscat, Oman, became the latest of $1 million winner in the Millennium Millionaire Series No.392 with ticket number 0982, which he purchased online on May 29.

A regular participant in Dubai Duty Free’s promotion for 6 years now, Varghese is a father of two and works as a general manager for an FMCG (Fast Moving Consumer Goods) company in Muscat.

A frequent traveller, who have spent 35 years in the Middle East, travelling between Dubai and Muscat, Varghese used to purchase tickets at the Dubai Duty Free Finest Surprise counters in Dubai Airport prior to COVID-19 pandemic.

When asked of his initial plan with his win, Varghese said, “A big chunk will be saved for my retirement, while a portion will go towards some charities, specifically those aimed at benefitting women and children.” “This is my first time to win in any draw, so I am really thankful for this great luck. Dubai Duty Free will going to be part of my life now,” he added.

Varghese who hails from Kerala in India is the 192nd Indian national to have won $1 million since the start of the Millennium Millionaire promotion in 1999.

Following the Millennium Millionaire draw, the Finest Surprise draw was conducted for four luxury vehicles. Nawaf Saad, a 62-year-old Saudi national based in Jeddah won a BMW X6 M50i (Mineral White Metallic) car, with ticket number 0644 in Finest Surprise Series 1807, which he purchased online on May 26.

Born and raised in Jeddah, Saad is a regular participant in Dubai Duty Free’s promotion since 2020 and had bought five tickets for Series 1807. The father of two was delighted to learn of his win and commented, “Thank you very much Dubai Duty Free. You had made my day!” 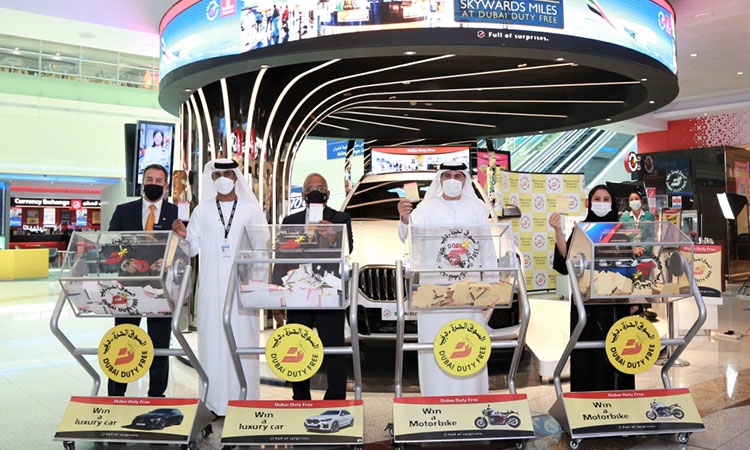 Thimmaiah Nanjappa, a 40-year-old Indian national based in Dubai won a Mercedes Benz CLS 53 4M AMG (Obsidian Black Metallic) car, with ticket number 0108 in Finest Surprise Series 1808, which he purchased on 3rd June on his way to Bengaluru for a vacation.

A regular participant in Dubai Duty Free’s promotion for 5 years now, Nanjappa is a resident of Dubai for 15 years and works as an account manager for an animal relocation company in Dubai. “I’m very grateful to Dubai Duty Free and I will continue participating. I will also encourage my colleague to do so,” he said.

A resident of Sharjah since 2013, Mr. Ansari is a father of four and works as an accountant for a manufacturing company in Sharjah. A first time ticket buyer, Mr. Ansari was understandably surprised to learn that he won this early with his first ever ticket to Dubai Duty Free promotion. “Thank you Dubai Duty Free! I couldn’t believe that I won with my first ever ticket to your promotion,” he said.

Lastly,. Jameil Fonseca, a 40-year-old Indian national based in Dubai won a BMW R nineT (Night Black Matt/ Aluminum) motorbike, with ticket number 0238 in Finest Surprise Series 502, which he purchased online on 2nd June. A regular participant in the Dubai Duty Free promotion for 10 year now, Fonseca had bought two tickets for Series 502 and was delighted to learn of his win.

A resident of Dubai for 14 years, Fonseca is a father of two and works as a distribution manager for a pharmaceutical company in Dubai. “Thank you Dubai Duty Free for this amazing win and I encourage everyone to participate. Now I can sell my old motorbike and can’t wait to try this new one,” he said.