Afghan protesters hold placards and shout slogans against the US during a protest in Kabul, Afghanistan, on Saturday. AP

Demonstrators in Afghanistan’s capital on Saturday condemned President Joe Biden’s order freeing up $3.5 billion in Afghan assets held in the US for families of America’s 9/11 victims – saying the money belongs to Afghans.

Protesters who gathered outside Kabul’s grand Eid Gah mosque asked America for financial compensation for the tens of thousands of Afghans killed during the last 20 years of war in Afghanistan.

Biden’s order, signed Friday, allocates another $3.5 billion in Afghan assets for humanitarian aid to a trust fund to be managed by the UN to provide aid to Afghans.

US, allies tell citizens to leave Ukraine as Russia may invade any day

The country’s economy is teetering on the brink of collapse after international money stopped coming into Afghanistan with the arrival in mid-August of the Taliban.

Afghanistan’s Central Bank called on Biden to reverse his order and release the funds to it, saying in a statement on Saturday that they belonged to the people of Afghanistan and not a government, party or group. 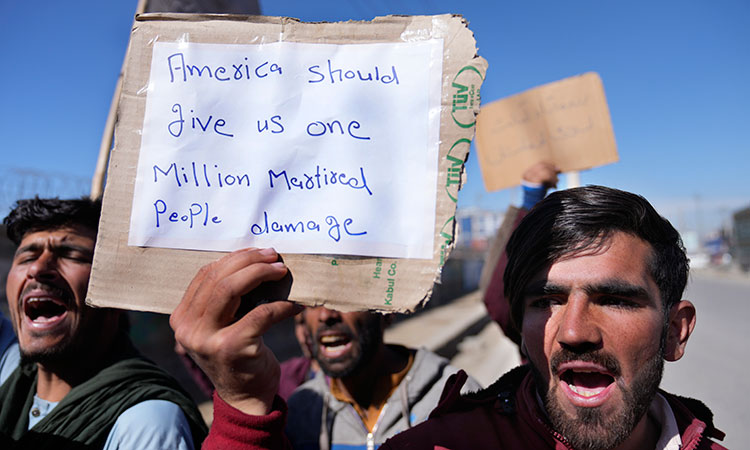 Afghan protesters hold placards against US in Kabul, Afghanistan, on Saturday. AP

Torek Farhadi, a financial adviser to Afghanistan’s former US-backed government, questioned the UN managing Afghan Central Bank reserves. He said those funds are not meant for humanitarian aid but “to back up the country’s currency, help in monetary policy and manage the country’s balance of payment.”

He also questioned the legality of Biden’s order.

“These reserves belong to the people of Afghanistan, not the Taliban … Biden’s decision is one-sided and does not match with international law,” said Farhadi.

“No other country on Earth makes such confiscation decisions about another country’s reserves.”

Afghanistan has about $9 billion in assets overseas, including the $7 billion in the United States. The rest is mostly in Germany, the United Arab Emirates and Switzerland.

“What about our Afghan people who gave many sacrifices and thousands of losses of lives?” asked the demonstration’s organizer, Abdul Rahman, a civil society activist.

Rahman said he planned to organize more demonstrations across the capital to protest Biden’s order. “This money belongs to the people of Afghanistan, not to the United States. This is the right of Afghans,” he said.

Misspelled placards in English accused the United States of being cruel and of stealing the money of Afghans.

Taliban political spokesman Mohammad Naeem accused the Biden administration in a tweet late Friday of showing “the lowest level of humanity … of a country and a nation.” 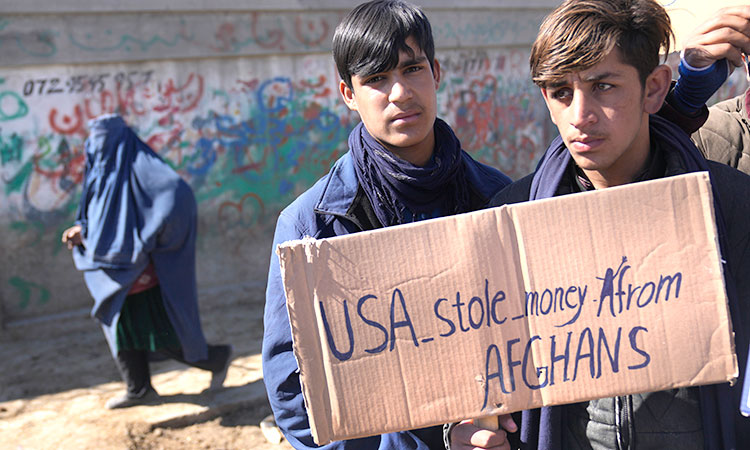 Afghans hold placard against US during a protest in Kabul, Afghanistan, on Saturday. AP

Obaidullah Baheer, a lecturer at the American University in Afghanistan and a social activist, tweeted: “Let’s remind the world that #AfghansDidntCommit911 and that #BidenStealingAfgMoney!”

Separately,  the UK government said on Saturday that a “number” of British nationals are being detained in Afghanistan, adding that it had raised the issue with the country’s Taliban authorities.

The foreign ministry’s statement to media came a day after the Taliban released two overseas journalists who had been detained, including a former BBC correspondent.

“We are providing support to the families of a number of British men who have been detained in Afghanistan,” the ministry said, without specifying how many British nationals were being held and by whom.

“UK officials have raised their detention with the Taliban at every opportunity, including when a delegation travelled to Kabul this week.”

A British delegation led by Hugo Shorter – the head of the UK’s mission to Afghanistan but based in Qatar – flew to Kabul to meet foreign minister Amir Khan Muttaqi earlier this week.

Shorter said he had discussed the humanitarian crisis in Afghanistan, as well as human rights abuses, with Taliban officials during his trip to the country.

On Friday, Western media reports said at least six British citizens were being detained in Afghanistan, including former BBC correspondent Andrew North, who was released later that day.