The Ruler of Sharjah thanked the Lisbon Academy of Sciences and its leadership for the honour.

As part of its “Piece of the Month” project during the month of May, Dr Sultan Al Qasimi Centre will be celebrating the prestigious medal and membership of the Lisbon Academy of Sciences, which was awarded to His Highness Dr. SheikhSultan Bin Mohammed Al Qasimi, Supreme Council Member and Ruler of Sharjah, in October 2013, for his generous support to scientific research institutions around the world.

The prestigious medal had been formally conferred on HH the Ruler of Sharjah in a special ceremony held at the Lisbon Academy of Sciences headquarters in the Portuguese capital, Lisbon, and was attended by a group of distinguished scholars and diplomats. Speaking on the occasion, the Ruler of Sharjah thanked the Lisbon Academy of Sciences and its leadership for inviting him to join its honorary membership following a unanimous vote by all its members. 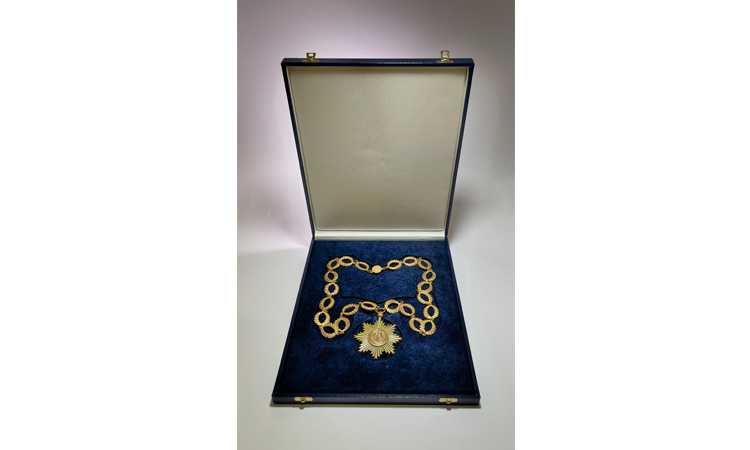 Sheikh Sultan stressed that culture will continue to remain the collective heritage of humanity and will not be affected by the rapid changes that the world is witnessing in various fields as it is linked to societal customs, traditions and what remains in arts, heritage and literature. “These are the rich resources that help us achieve various daily tasks and encourage creativity and innovation,” he pointed out.

The “Piece of the Month” series has been launched by Dr. Sultan Al Qasimi Centre to celebrate and highlight one of the distinct awards, medals and honours from the collection of the Ruler of Sharjah. These awards and accolades celebrate exceptional achievements in various scientific and cultural fields.