Australia’s new prime minister was sworn in Monday and flew to Tokyo for a summit with President Joe Biden while vote counting continued to determine whether he will control a majority in a Parliament that is demanding tougher action on climate change.

“I want to lead a government that has the same sentiment of optimism and hope that I think defines the Australian people,” Albanese said in his hometown of Sydney before flying to the national capital Canberra to be sworn in. 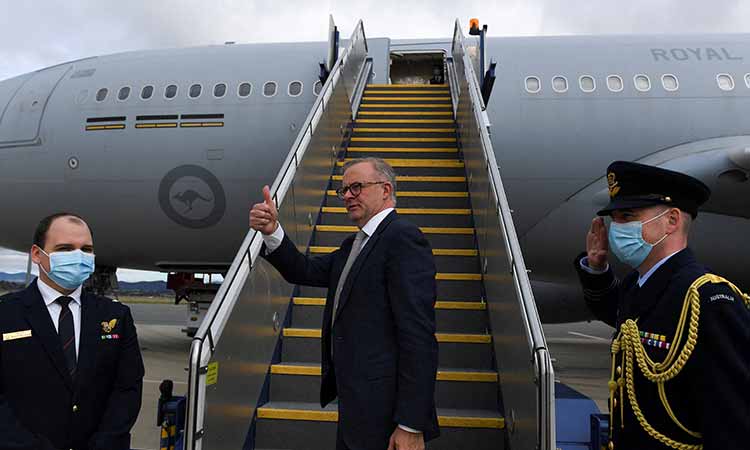 Albanese, who describes himself as the first ever candidate for the office of prime minister with a “non-Anglo Celtic name,” and Malaysian-born Penny Wong, Australia’s first foreign minister to be born overseas, were sworn into office by Governor-General David Hurley before the pair flew to Tokyo for a security summit on Tuesday with Biden, Japanese Prime Minister Fumio Kishida and Indian Prime Minister Narendra Modi.

“We will return (from Japan) on Wednesday and set about implementing our agenda, our agenda that received the endorsement of the Australian people,” Albanese said, highlighting items such as climate change, affordable child care and strengthening Medicare.

Biden rang Albanese to congratulate him on his election win and express the president’s wish to make the countries’ alliance stronger, the White House said.

Albanese described their conversation as “very fruitful and positive.”

Morrison’s decision to resign as prime minister during the early vote counting enabled Hurley, who represents Australia’s head of state, British monarch Queen Elizabeth II, to appoint his replacement without evidence that Albanese can control a majority of seats in parliament’s lower chamber where governments are formed.