An Algerian named Fares was told by a doctor that he was living with a knife inside his body for the last 26 years.

This is one of the strangest medical cases that were dealt with in Algeria.

In 1996, the man was assaulted and was stabbed in the back.

The 43-year-old became the subject of conversation for all Algerians, as he was living a normal life since he was 17.

The young man did not expect that a part of the knife would be left in his body. 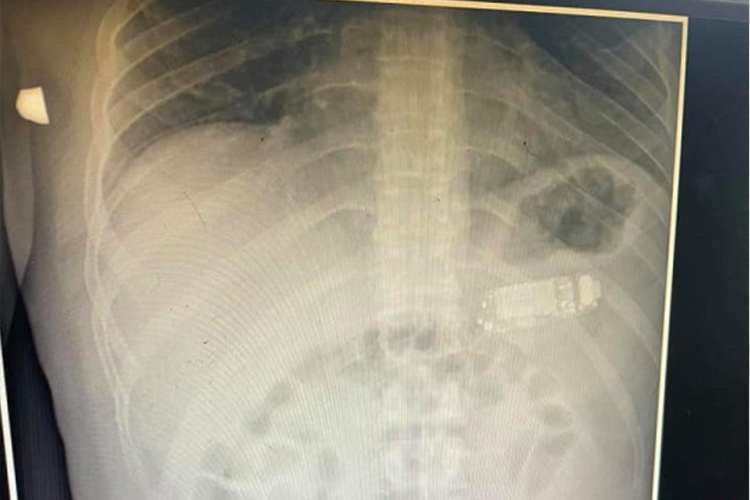 It was learnt that during the attack, the knife split in half, as the handle separated from the sharp part that remained stuck in the victim’s back.

Fares said that after being stabbed he fainted and lost consciousness and did not notice the nature of the treacherous blow he had received in the back.

After leaving the hospital, the young man continued to suffer from the pain of that wound, until he recovered completely, and then resumed his normal life, not knowing that the medical staff who performed the operation forgot the front part of the dagger in his body

The sharp piece of iron was 5 centimeters.

The young man continued his normal life for 26 years, and every time he felt pain, he was satisfied with taking pain relievers, until he discovered the terrible truth recently.

The young man revealed the truth when he visited a doctor, and he took an x-ray, and he noticed a strange object in his back.

The doctor did not believe what he saw, and told him,: “It seems that there is a defect in the radio device,” and asked him to repeat the imaging in another clinic.

He repeated the x-ray process several times to make sure that the image clearly showed the front part of the dagger he was stabbed with in 1996.

After this discovery, the doctors told him that the process of removing this piece of iron is very dangerous, especially as it causes injury to some nerves, with dire consequences, up to paralysis, especially since the knife is located near the spinal cord.

Despite all the risks, the young man insisted on performing the operation.

He hopes that 2022 will be the last year for the dagger to stay in his back, after it lasted 26 years.