A man pulls a cart at the shelled Barabashovo market in Kharkiv, Ukraine, on Sunday. Reuters

“The repeated bombardments of residential neighbourhoods in Kharkiv are indiscriminate attacks which killed and injured hundreds of civilians, and as such constitute war crimes,” the rights group said in a report on Ukraine’s second biggest city.

“This is true both for the strikes carried out using cluster (munitions) as well as those conducted using other types of unguided rockets and unguided artillery shells,” it said.

“The continued use of such inaccurate explosive weapons in populated civilian areas, in the knowledge that they are repeatedly causing large numbers of civilian casualties, may even amount to directing attacks against the civilian population.”

Amnesty said it had uncovered proof in Kharkiv of the repeated use by Russian forces of 9N210 and 9N235 cluster bombs and scatterable land mines, all of which are banned under international conventions. 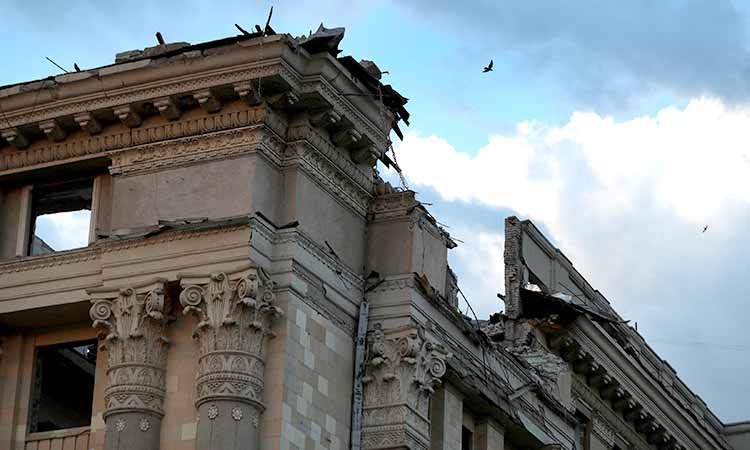 This photo shows a view of the shelled building of Kharkiv Region State Administration, Ukraine. Reuters

Cluster bombs release dozens of bomblets or grenades in mid-air, scattering them indiscriminately over hundreds of square metres (yards).

Unguided artillery shells have a margin of error of over 100 metres.

The report, entitled “Anyone Can Die At Any Time”, details how Russian forces began targeting civilian areas of Kharkiv on the first day of the invasion on February 24.

The “relentless” shelling continued for two months, wreaking “wholesale destruction” on the city of 1.5 million.

“People have been killed in their homes and in the streets, in playgrounds and in cemeteries, while queueing for humanitarian aid, or shopping for food and medicine,” said Donatella Rovera, Amnesty International’s Senior Crisis Response Adviser.

“The repeated use of widely banned cluster munitions is shocking, and a further indication of utter disregard for civilian lives.

“The Russian forces responsible for these horrific attacks must be held accountable.” 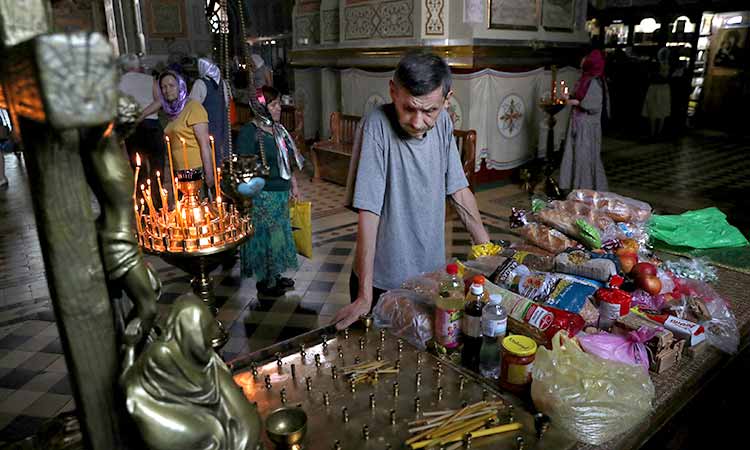 Kharkiv’s Military Administration told Amnesty 606 civilians had been killed and 1,248 wounded in the region since the conflict began.

Russia and Ukraine are not parties to the international conventions banning cluster munitions and anti-personnel mines.

One of the witnesses Amnesty spoke to had survived cancer, only to lose both her legs in a Russian cluster bomb attack.

Olena Sorokina, 57, was outside her building when flying shrapnel hit her. She lost one leg instantly and the other had to be amputated later.

A neighbour with her was killed on the spot. The latter’s daughter said the shrapnel tore through the building.

“Even if mum had been inside her home she would have been hit. She stood no chance in the face of such bombing,” she said.

Amnesty investigated 41 Russian strikes that killed at least 62 people and wounded at least 196. It spoke to 160 people in Kharkiv over two weeks in April and May, including survivors, victims’ relatives, witnesses and doctors.

Ukraine says it has launched more than 12,000 war crimes probes since the war began.