Pervez Musharraf is surrounded by top military officers as he leaves the Presidential House in Islamabad on Aug.18, 2008. AP

Pakistan’s powerful military said on Wednesday that ailing former army chief Pervez Musharraf, who seized power in a bloodless coup 23 years ago and ruled for nine years, should be allowed to return from self-imposed exile in Dubai.

Musharraf’s family said last week the 78-year-old was unlikely to recover from multiple organ failure in Dubai, where he has been since 2016 after being allowed to leave Pakistan for medical treatment.

At the time, the former four-star general was facing multiple court cases related to his period of rule, and was sentenced in absentia to death for treason, a ruling that was later annulled.

“It was the opinion of the institution and its leadership that Pervez Musharraf may return to the country in view of his poor health if the family so desires,” Major General Babar Iftikhar, head of the military’s Inter Services Public Relations (ISPR) publicity wing, was quoted as saying by local media. ISPR confirmed his remark on Wednesday.

Meanwhile, former prime minister and Pakistan Muslim League-Nawaz (PML-N) supremo Nawaz Sharif has called on the government to facilitate his one-time political adversary Musharraf’s return to Pakistan on account of his poor health.

“I have no personal enmity or animosity towards Musharraf. I don’t want anyone else to suffer the traumas I have had to endure for my loved ones,” said Sharif, who like Musharraf, has spent the past few years in self-exile. 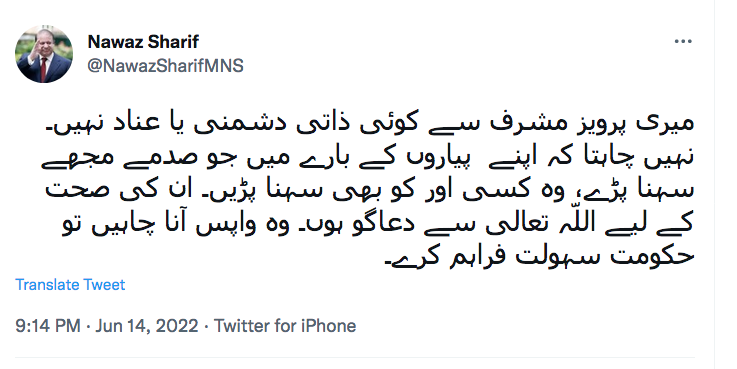 Their relations had frayed in 1999 when Nawaz was the prime minister and his government was overthrown by Musharraf — the then army chief.

Musharraf’s family has clarified that he was not on a ventilator but had been hospitalised for the last three weeks.

The family had issued the statement after false news of his demise started circulating on social media after some Pakistani and Indian publications carried it.

The retired general’s illness came to light in 2018 when the All Pakistan Muslim League announced that he was suffering from the rare disease amyloidosis.

Prior to Sharif’s statement, Defence Minister Khawaja Asif had stated that the government should facilitate Musharraf’s return to Pakistan.

Musharraf still faces numerous court cases should he return to the country.

Leading human rights activist Tahira Abdullah said Musharraf should be tried if he does return. “As a citizen of Pakistan, everyone has the right of return,” she said.

“However… he must be arrested immediately after setting foot on Pakistani soil and must be sent to jail – or to hospital if he is ill,” she added.

Retired general Talat Masood, now a defence and political analyst, said Musharraf should be allowed to die in peace at home. “After all, he is a Pakistani… and now wants to spend his last days in the country and he should be allowed,” he said.

Liaqat Baloch, a senior leader of the Jamaat-e-Islami party, also said Musharraf should be allowed to return. “We pray to Allah that he recovers soon — and then he should face the raft of cases pending against him,” he said.