US President Joe Biden checks his watch after arriving at the White House in Washington on Wednesday. Reuters

Joe Biden will visit Japan and South Korea on his first Asian trip as US president, carrying a clear message to China, advisers and analysts say — don’t try what Russia did in Ukraine anywhere in Asia, and especially not in Taiwan.

Biden departs for the five day trip on Thursday, after spending several months organising allies to punish Russia for its invasion of Ukraine, which Moscow calls a “special operation.”

He meets new South Korean President Yoon Suk-yeol in Seoul and Japanese Prime Minister Fumio Kishida in Tokyo, leaders who share anxieties about North Korea and China and are eager to build on their long alliances with Washington.

“At its core this (trip) is about building out the alliance network in East Asia,” in part to counter any Chinese actions against Taiwan, said Evan Medeiros, an Asia specialist in the Barack Obama administration. 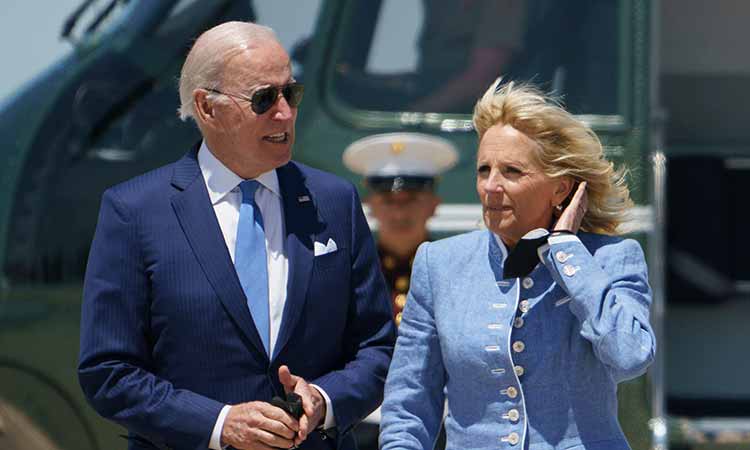 US President Joe Biden and First Lady Jill Biden arrive at Joint Base Andrews in Maryland on Wednesday. AFP

Sweeping sanctions Biden led against Russia would not be so simple against Beijing. China is South Korea’s largest trade partner, and the biggest source of goods that Japan imports, in each case beating no. 2 United States by a wide margin. Complicating Biden’s message, his administration has not laid out a plan to counter Beijing if it moves to retake the self-governed island of Taiwan, even as US intelligence sees preparations underway.

Even with those shortcomings, support for Washington from Seoul and Tokyo is stronger than in recent history.

“The president’s lucky in who he has as counterparts,” said Michael Green, an Asia specialist at the Washington think tank Center for Strategic and International Studies. “I was doing the math on this, and it’s been at least 20 years since an American president could travel to Japan and Korea and count on the leaders in both countries being so forthrightly pro-alliance.”

Dubai to benefit from the World Cup in Qatar