The scion of Pakistan’s most influential political dynasty was appointed foreign minister on Wednesday, the latest step up a ladder likely to take Bilawal Bhutto Zardari to the top of the country’s leadership.

The oath-taking ceremony was held at Aiwan-e-Sadr where Shahbaz was also present.

President Alvi administered the oath. Bilawal will be the foreign minister as per the allocation of cabinet portfolios done by the coalition partners. 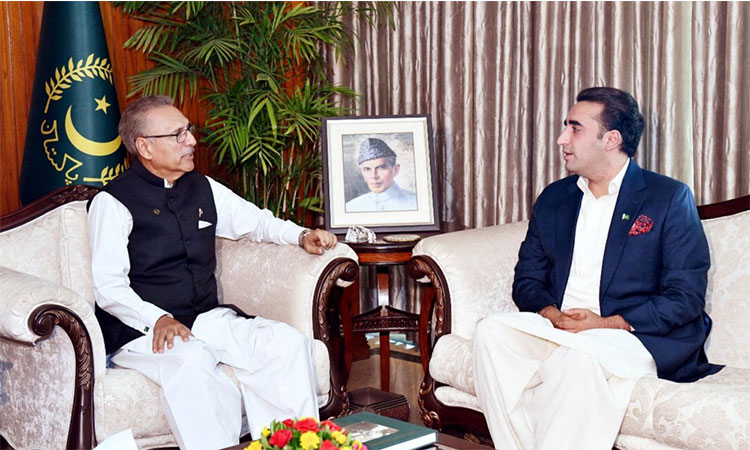 Bilawal’s father former President Asif Ali Zardari was present in the presidency where the swearing in took place. Besides, a large number of PPP leaders and all the federal ministers belonging to the party attended the ceremony. After the oath-taking, the president shook hands with Bilawal.

It was a rare sight because Alvi belonging to the Pakistan Tehrik-e-Insaf (PTI) had refused to administer oath to Shahbaz Sharif as the prime minister.

However, he had performed this constitutional duty when the second installment of the cabinet inductions had been sworn in.

Thirty-three-year-old Bilawal was first elected to the National Assembly in 2018. This is the first time he will be serving as a member of the federal cabinet.

His sister Bakhtawar congratulated Bilawal for taking oath as the foreign minister. She said the PPP central executive committee decided that Bilawal would join the cabinet.

“We couldn’t be more proud of him! Already outshone in parliament and always stuck to his democratic values — excited to witness this path if God wills.”

As Bilawal joined the cabinet, the PTI leaders and other detractors of the PPP taunted him saying that he will now work under the command and control of the Pakistan Muslim League-Nawaz (PML-N) President, who is also the prime minister.

Aged 33, Bilawal becomes one of the world’s youngest foreign ministers but inherits a diplomatic bag of issues that started well before he was born — including relations with India.

His first foreign mission in the role will be accompanying Shahbaz on Thursday to Saudi Arabia, a key trade partner and regular source of relief for Pakistan’s struggling economy.

The new foreign minister is considered a progressive, in his mother’s image, and has frequently spoken out on the rights of women and minorities.

With more than half of Pakistan’s population aged 22 or below, Bilawal’s social media savvy nature is also a hit with the young, although he is frequently mocked for a poor command of Urdu, the national language.

Bilawal is the son of assassinated former prime minister Benazir Bhutto and ex-president Asif Ali Zardari, as well as the grandson of another former premier, Zulfikar Ali Bhutto.

His grandfather also served as foreign minister in the mid-1960s and was the founder of the PPP that Bhutto now leads.

He became party leader aged just 19, while a student at Oxford University, following his mother’s assassination in 2007.