People who have fled Ukraine because of the Russian invasion wait for a bus to transport in Medyka, Poland. Reuters

Scores of African migrants in Ukraine are being blocked from fleeing to safety as Russian attacks continue to devastate the country, those trying to make border crossings have told The Independent.

Black people living in the region say they have been left to languish, with some taking to Twitter in recent days to share accounts of abandonment.

Speaking to The Independent, Osarumen, a father-of-three, said he and his family members were waved away from the border on Saturday and told, “No blacks”.

“Since then, I’ve been trying to get myself together and focus as normal but it’s been difficult,” he said.

“In all of my years as an activist, I have never seen anything like this. When I look into the eyes of those who are turning us away, I see bloodshot racism; they want to save themselves and they are losing their humanity in the process. 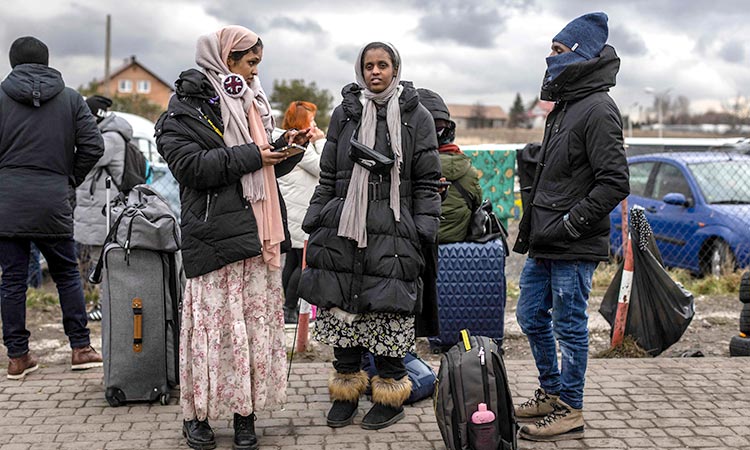 Girls wait for transport as refugees arrive at the Medyka pedestrian border in Ukraine. AFP

“I cannot imagine a scenario where white Ukranians would ever be denied asylum so how they’re treating us is unwarranted. It’s baseless. We are all escaping so let’s push a common thread.”

Osarumen, a Nigerian national who has lived in Ukraine since 2009, said he was currently stranded at a train station in Kyiv, the capital city, along with thousands of others and unsure of his next move.

“This isn’t just happening to black people – even Indians, Arabs and Syrians,” he added, “and that shouldn’t be the case.”

Christian, 30, received a video call from his friend, Winston, from the Medyka border crossing, where he claimed to have seen Ukrainian military personnel preventing hundreds of African and other international citizens from going to Poland.

Speaking to The Independent, Osarumen, a father-of-three, said he and his family members were waved away from the border on Saturday and told, “No blacks”. I cannot imagine a scenario where white Ukranians would ever be denied asylum so how they’re treating us is unwarranted. It’s baseless. We are all escaping so let’s push a common thread.”

He has been waiting to receive Winston, a Nigerian national, in Poland but has not been able to contact him on the phone; he fears that his battery has died or worse.

“No English, no Polish, no blacks, they told my friend. This is about racism,” Christian told The Independent.

“As I talk to you, I haven’t slept for the past two days. I am worried about hearing that my friend, my brother, is no more; that my fellow Africans have died.

“Equal rights is something that everyone should have; Africans don’t have equal rights with white Ukranians. We should not discriminate – we’re all human. This is war.”

Footage has gone viral of people being blocked from boarding trains and another of a Chinese man in the country apparently ranting about African refugees taking away opportunities and referring to them as “darkish people”.

Twenty-four Jamaican students who yesterday arrived in Lviv from Kharkiv by train are now being forced to walk 20km to Poland. The country’s foreign affairs minister, Kamina Smith, said they were blocked from boarding the bus that was carrying the students to Poland. 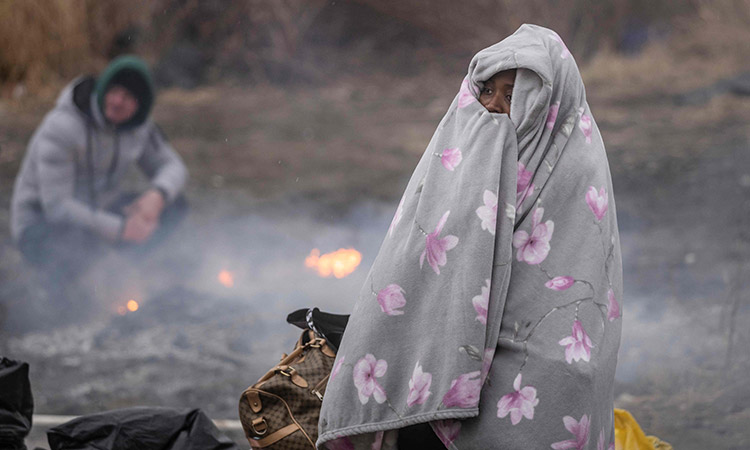 Medical student Korrine Sky, 26, has been living in Ukraine since September and has just arrived in Lviv, from where she is hoping to move on.

“Some of the locals are ‘prioritising’ Ukrainians and black people are struggling to get onto buses, facing hostility or being denied at the border,” she told The Independent.

Ms Sky has been telling people to arrange taxis and is crowdfunding towards the fare; many of her peers are from poorer backgrounds and do not have the means to secure this mode of travel, which can cost hundreds of pounds.

Likening the unfolding crisis around her to an “apocalypse movie”, the student described vigilantes pacing up and down, carrying guns under the guise of supporting the army. The student said she had personally experienced being threatened at gunpoint by local armed men.

In the current crisis, black people – especially migrants – are particularly vulnerable because of racism, Ms Sky said. “As a community we are generally fearful of armed police and being frequently stopped by people with guns is terrifying. I think I’m running on adrenaline at the moment; I’m assisting people while on the road so I need to remain calm so I can support others.”

Poland has also reportedly been refusing asylum to black refugees while letting in white Ukrainians, some of those trying to cross the border have claimed.

During a discussion held on Twitter Spaces on Saturday, attended by The Independent, hundreds of stranded Nigerian citizens, their family members and peers voiced concern about the plight of their peers. 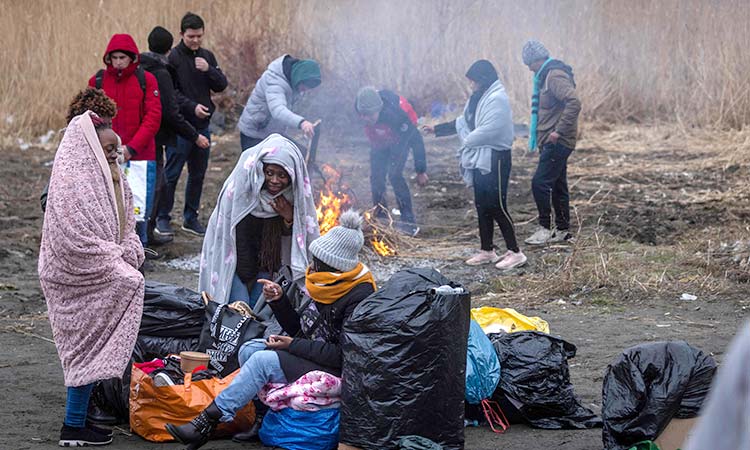 Refugees from Africa, Middle East and India keep themselves warm by a bonfire at the Medyka pedestrian border. AFP

The situation has fuelled a sense of consternation among onlookers within global African and Caribbean disaporas that, even during a time of war, black people fare worse than their white counterparts.

“Black Africans are being treated with racism and contempt in Ukraine & Poland. West cannot ask African nations to stand in solidarity with them if they cannot display basic respect for us even in a time of war. Ignored in a pandemic and left to die in war?!! UNACCEPTABLE,” Dr Ayoade Alakija, a special envoy at the World Health Organisation, said on Twitter.

Parts of eastern Europe have suffered from a prominent white nationalist presence. However countries like Ukraine, where university fees are affordable, are popular destinations for international students.

Ukraine has closed its airspace to civilian flights, including from Kyiv, citing the safety risk which has forced many to walk for days where access to train and car transportation have been scarce.

“It is obvious that we Africans are regarded as lower beings,” said Nze, a student, who’s been forced to walk several hours to a Poland border.

While attempting to board a train in Kyiv prior to his trek, he said he observed a racial hierarchy of those being organised to board: children first, followed by white women, white men and then Africans.

“This means that we have waited for many hours for trains here and couldn’t enter because of this. Majority of Africans are still waiting to get to Lviv,” he tweeted on Friday along with an accompanying photograph of the crowds.

“We had to start shouting and pushing African women to the train, so they had no other option than to allow them since they said women and children first. It wasn’t the case earlier.”

Around 4,000 Nigerians are currently studying in Ukraine and comprise the second biggest group of foreign students in the country, behind Moroccans which account for 8,000 students.

Writing on Twitter, Nigerian politician Femi Fan-Kayode said: “Poland & the other European nations that border the Ukraine are allowing fleeing Ukrainians, Indians, Arabs and other nationals to cross their border and take refuge in their country.

“The only people they are barring are black Africans & right now there are hundreds of African students stranded on the Polish border.

“Worst of all is the fact that the Ukrainians themselves are not allowing Africans to board the free trains that they have provided for Ukrainians and other nationals to leave the Ukraine and flee to Europe.”

Fan-Kayode, the former tourism minister, added: “There are reports that the Ukrainian police got on these free trains and removed all Africans saying they had to stay whilst they allowed nationals from ALL other countries, including India etc, to proceed. That is how low down the ladder Africans are now. It is so sad.”

Another Nigerian medical student at the Medyka-Shehyni crossing between Poland and Ukraine said that she had been waiting for seven hours to cross and said border guards were stopping black people and sending them to the back of the queue, saying they have to let “Ukrainians” through first.

“This situation is bringing out the best and the worst in some people. We’ve been stopped by some military and armed police officers; some have been very nice and some have been aggressive. It tends to be worse as it gets darker,” Ms Sky said, adding that the situation is getting “increasingly worse”.

A number of Nigerian students, and their family members, have taken to social media to share their concerns about alleged racial discrimination from guards at borders and safety points, and what they said was a lack of support from their government.