A view shows smoke rising from a building in Kabul, Afghanistan, in this still image on Saturday. Reuters

Blasts and gunfire were heard coming from a Sikh temple in the Afghan capital on Saturday, witnesses told the media, with one saying armed men had stormed the complex.

“I heard gunshots and blasts coming from the gurdwara,” Gurnam Singh, a Sikh community leader told the media.

In earlier report, a blast occurred in a Sikh temple in the Afghan capital Kabul on Saturday morning, a temple official said, but it was unclear if there were casualties.

“There were around 30 people inside the temple. We don’t know how many of them are alive or how many dead. The Taliban are not allowing us to go inside, we don’t know what to do,” the official, Gornam Singh, told Reuters.

Taliban officials have not confirmed the explosion, and it was not immediately clear who was behind the blast. 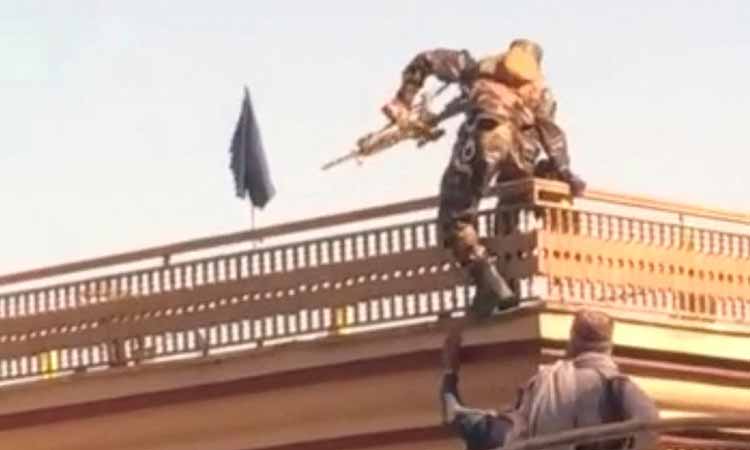 Afghanistan’s Taliban rulers say they have secured the country since taking power in August, but international officials and analysts say the risk of a resurgence in militancy remains. Multiple attacks have taken place in recent months, with some claimed by the Islamic State militant group.

Sikhs are a tiny religious minority in largely Muslim Afghanistan, comprising around 300 family members before the fall of the country to the Taliban. Many had left the country in the wake of the takeover, according to community members and media reports.

The Sikh community, like other religious minorities, has been the continual target of violence in Afghanistan. An attack claimed by the Islamic State at another temple in Kabul in 2020 killed 25.

Saturday’s explosion follows a blast on Friday in the northern city of Kunduz at a mosque that killed one and injured two, according to authorities.