Truckers and supporters block access to the Ambassador Bridge in Windsor, Ontario, Canada, on Saturday. Reuters

Canadian demonstrators led by truckers angry over COVID-19 restrictions defied police and kept occupying a key bridge on Saturday, while police made the first arrest of a protester blocking a key bridge.

Late on Saturday, Windsor Police arrested a 27-year-old male for a criminal offence in relation to the demonstration as authorities moved in seeking to end the blockade of the important trade corridor.

While police have successfully pushed back protesters from the foot of the Ambassador Bridge, which links Detroit and Windsor, more people were streaming into the area and the operation appeared to have stalled.

The demonstrations have inspired copycat protests that are now spreading around the globe, including to France, the Netherlands, Switzerland and Australia. 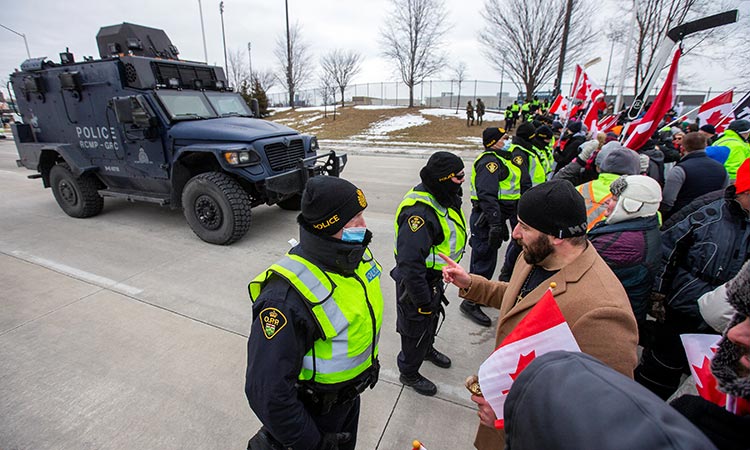 In Ontario, where authorities have declared a state of emergency, the provincial supreme court had ordered truckers to end their blockade of the strategic Ambassador Bridge, which links the city of Windsor in Canada to Detroit, Michigan in the United States.

The protest has forced major automakers in both countries to halt or scale back production and Washington on Friday urged Ottawa to use its federal powers to end the blockade.

As the afternoon dragged on, some Canadians questioned what was behind the delay, given the order issued by a court on Friday to end the blockade and the imposition of a state of emergency declared by Ontario authorities. 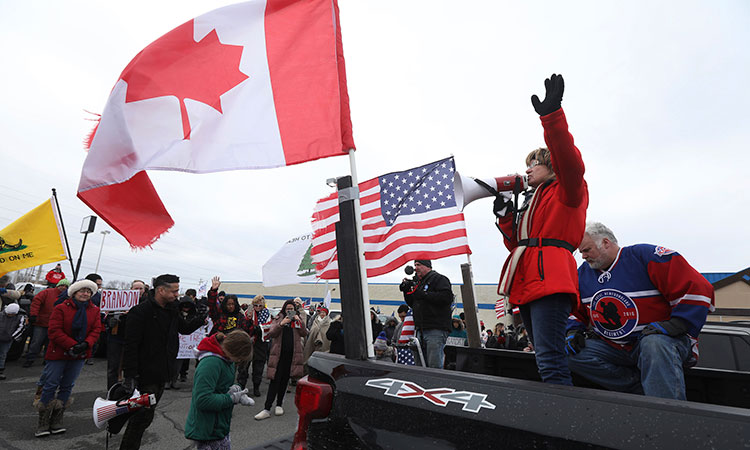 The tense standoff at the Ambassador Bridge linking Detroit and Windsor, Ontario, eased somewhat early in the day when Canadian police persuaded demonstrators to move the trucks they had used to barricade the entrance to the busy international crossing.

But protesters reconvened nearby — with reinforcements — and were still choking off access from the Canadian side late Saturday, snarling traffic and commerce for a sixth day. About 180 remained late Saturday in the sub-freezing cold.

In Ottawa, the ranks of protesters swelled to what police said was 4,000 demonstrators. The city has seen that on past weekends, and loud music played as people milled about downtown where anti-vaccine demonstrators have been encamped since late January. 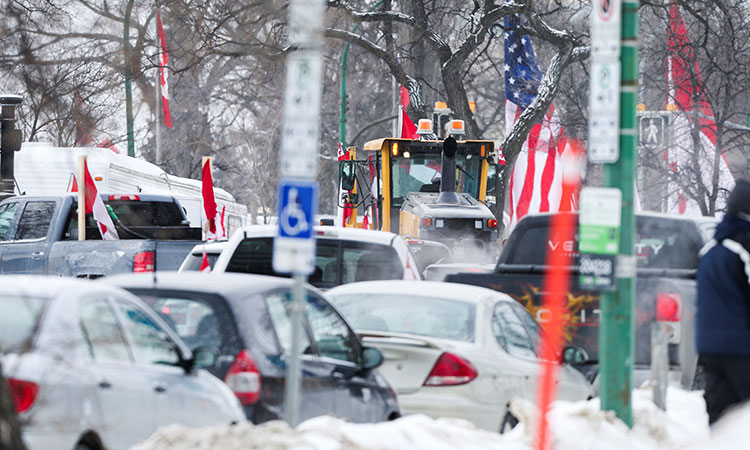 Truckers and their supporters continue to protest in Winnipeg, Manitoba, Canada, on Saturday. Reuters

The protests at the bridge, in Ottawa and elsewhere have reverberated outside the country, with similarly inspired convoys in France, New Zealand and the Netherlands, and the US Department of Homeland Security warned that truck convoys may be in the works in the United States.

An ex-Cabinet minister in Canadian Prime Minister Justin Trudeau’s government took the unusual step of calling out her former federal colleagues as well as the province and city for not putting an end to the protests.

The Ambassador Bridge is the busiest US-Canadian border crossing, carrying 25% of all trade between the two countries, and auto plants on both sides have been forced to shut down or reduce production this week. The standoff came at a time when the industry is already struggling to maintain production in the face of pandemic-induced shortages of computer chips and other supply-chain disruptions. 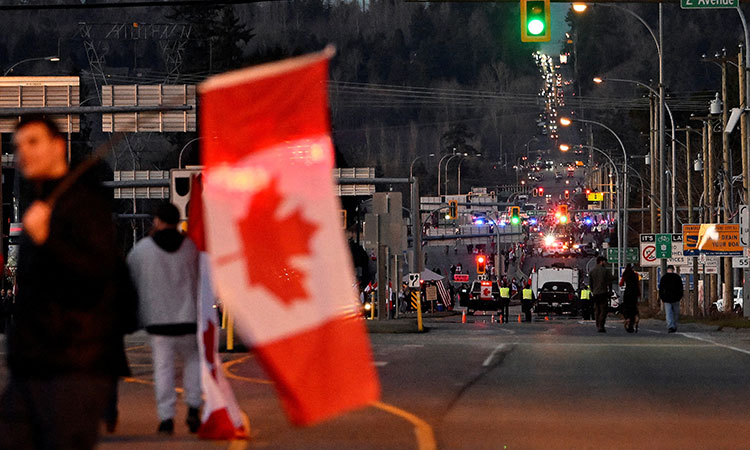 Vehicles line up in a convoy to support the protest against vaccine mandates in Surrey, Canada. Reuters

Earlier this week in New Zealand, protesters rolled up to Parliament grounds in a convoy of cars and trucks and set up camp. Police have taken a hands-off approach after initial attempts to remove them resulted in physical confrontations.

Parliament Speaker Trevor Mallard on Friday ordered his staff to turn on the lawn’s sprinklers to douse them and to play Barry Manilow tunes and the 1990s hit “Macarena” over loudspeakers to annoy them. Protesters responded by playing their own songs, including Twisted Sister’s “We’re Not Gonna Take It.”