Heartbroken celebrities offer prayers and condolences after 22 people freeze to death in Murree.

The celebrities shared the news on social media and expressed their shock and horror. However, many tweeps condemned people who are sharing heartwrenching videos from the tourist site.

Indian politician and Congress leader Sashi Tharoor took to Twitter to offer condolences on the sad demise of 22 people died in Murree after heavy snow. 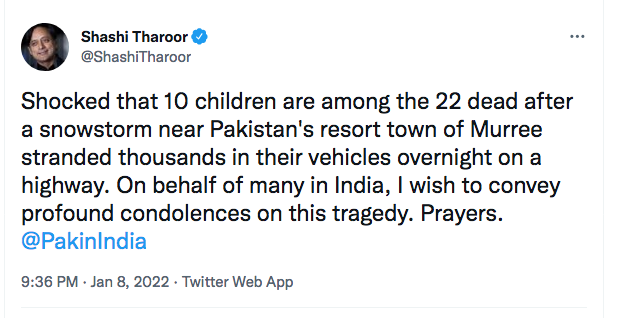 “Shocked that 10 children are among the 22 dead after a snowstorm near Pakistan’s resort town of Murree stranded thousands in their vehicles overnight on a highway. On behalf of many in India, I wish to convey profound condolences on this tragedy. Prayers,” Tharoor wrote on his Twitter accout.

Actor Saba Qamar took the news to Twitter and said “I am heartbroken to see images from Murree. My thoughts and prayers go out to the families who lost their loved ones.” She also advised her followers to check weather forecasts prior to any travel. 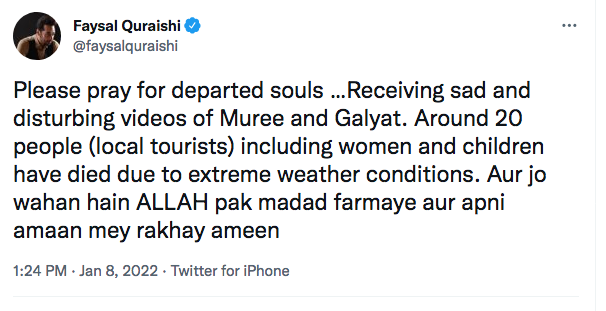 Faysal Quraishi also penned a few words for the people who lost their lives and asked his followers to pray for the departed souls. “Receiving sad and disturbing videos of Muree and Galyat. Around 20 people (local tourists) including women and children have died due to extreme weather conditions. Aur jo wahan hain ALLAH pak madad farmaye aur apni amaan mey rakhay ameen [May Allah keep the people who are still there safe and help them].” 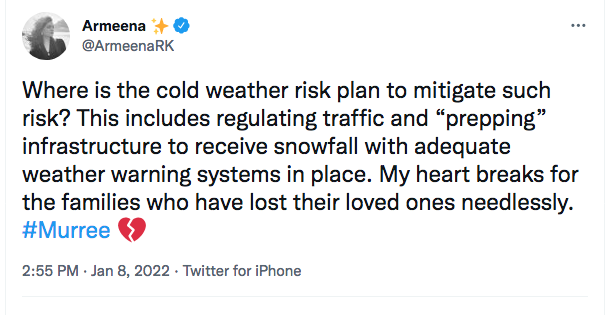 Actor Armeena Khan, however, drew attention towards mandatory travel restrictions and plans in place for such calamities.

“Where is the cold weather risk plan to mitigate such risk? This includes regulating traffic and “prepping” infrastructure to receive snowfall with adequate weather warning systems in place. My heart breaks for the families who have lost their loved ones needlessly.” 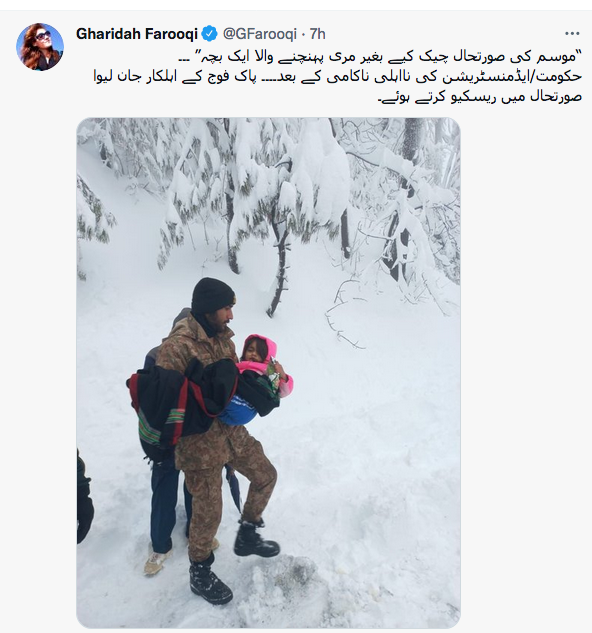 Senior anchor Maria Memon wrote on her Twitter account “Some heartless idiot has filmed & shared the video of frozen bodies in Murree. Please do not RT or share it further. Show some goddamn respect to the deceased.”

Leaders from opposition parties, Shahbaz Sharif, Bilawal Bhutto Zardari, Maryam Nawaz and others, have lambasted the Imran Khan-led government for the Murree disaster, blaming it for what they called “criminal negligence,” Samaa TV reported.

The opposition leaders expressed grief over the deaths of tourists in Murree, and criticised the government for victim-blaming.

Pakistan Muslim League-Nawaz (PML-N) President Shahbaz Sharif said he was heartbroken over the tragedy in Murree and questioned who was responsible for the deaths.

“Where was the government all the while? What arrangements did it make to deal with such an influx? Incompetence is fast turning into criminality. Prior arrangements & round the clock supervision were the normal SOPs in the past,” he tweeted. 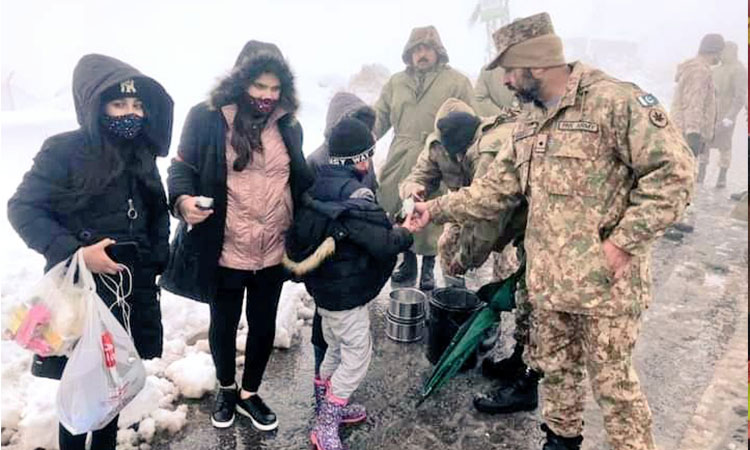 Shahbaz said the incident was an act of “criminal negligence” on the part of the government, which has exposed the incompetent government that cannot even handle a traffic situation, the report said.

Bilawal expressed sorrow over the demise of 22 people and said that the entire nation, like him, is saddened over the unfortunate incident in Murree.

“It would have been better had [the administration] informed the tourists about the weather situation in Murree. The local authorities should immediately begin the rescue operation,” he added.

PML-N Senator Ayesha Raza Farooq wrote, “Request for some empathy and compassion; Let’s not share videos of deceased tourists. Prayers and thoughts with families of deceased and with tourists stranded in the snow; may your ordeal be over soon.” 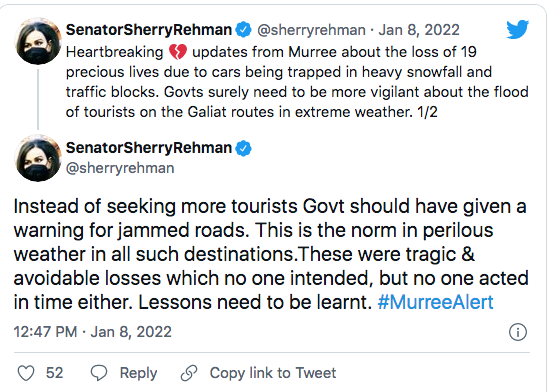 Terming the deaths heartbreaking, PPP Vice President Sherry Rehman said governments “needed to be more vigilant about the flood of tourists on the Galiyat routes.”

“Instead of seeking more tourists govt should have given a warning for jammed roads. These were tragic & avoidable losses which no one intended, but no one acted in time either. Lessons need to be learnt,” she added.