A general view of buildings in Lujiazui financial district across the Huangpu river in Shanghai, China. Reuters

China began its most extensive lockdown in two years on Monday to conduct mass testing and control a growing outbreak in Shanghai as questions are raised about the economic toll of the nation’s “zero-COVID” strategy.

Shanghai launched a two-stage lockdown of its 26 million people, closing bridges and tunnels, and restricting highway traffic in a scramble to contain surging COVID-19 cases.

The snap lockdown, announced by Shanghai’s city government on Sunday, will split the city in two roughly along the Huangpu River for nine days to allow for “staggered” testing. It is the biggest COVID-related disruption to hit the city. 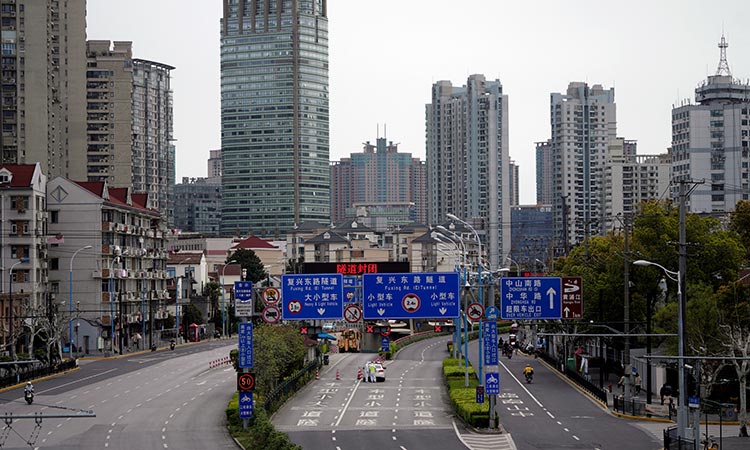 Police officers keep watch at an entrance to a tunnel leading to the Pudong area in Shanghai. Reuters

The order marks a turnaround for the city government, which as late as Saturday denied that Shanghai would be locked down as it pursued a more piecemeal “slicing and gridding” approach to try to rein in infections.

Shanghai’s Pudong financial district and nearby areas will be locked down from Monday to Friday as mass testing gets underway, the local government said. In the second phase of the lockdown, the vast downtown area west of the Huangpu River that divides the city will start its own five-day lockdown Friday.

Residents will be required to stay home and deliveries will be left at checkpoints to ensure there is no contact with the outside world. Offices and all businesses not considered essential will be closed and public transport suspended. 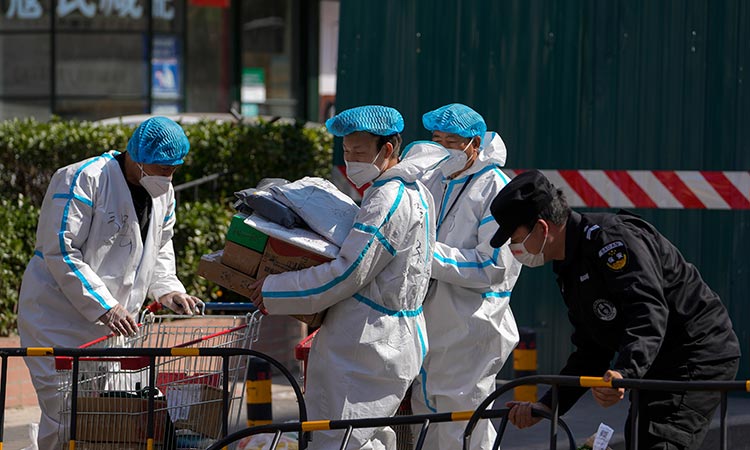 China began its largest lockdown in two years on Monday to control a growing outbreak in Shanghai. AP

“Containing the large scale outbreak in our city is very important because once infected people are put under control, we have blocked transmission,” she said, adding that testing would be carried out until all risks were eliminated.

A record 3,450 asymptomatic COVID cases were reported in Shanghai on Sunday, accounting for nearly 70% of the nationwide total, along with 50 symptomatic cases, the city government said.

Nationwide, there were 5,134 new asymptomatic and 1,219 symptomatic cases on Sunday,the health authority said in its regular bulletin. 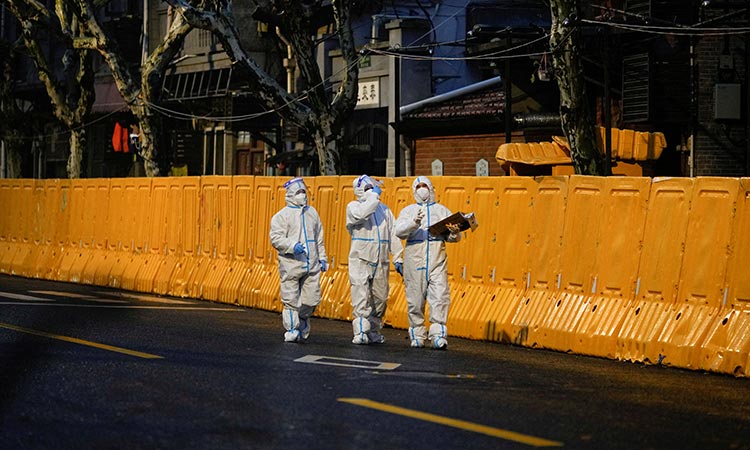 Medical staff members walk in front of barriers of an area under lockdown in Shanghai, China. Reuters

Already, many communities within Shanghai have been locked down for the past week, with their housing compounds blocked off with blue and yellow plastic barriers and residents required to submit to multiple tests for COVID-19. Shanghai’s Disneyland theme park is among the businesses that closed earlier. Automaker Tesla is also suspending production at its Shanghai plant, according to media reports.

Panic-buying was reported on Sunday, with supermarket shelves cleared of food, beverages and household items. Additional barriers were being erected in neighborhoods Monday, with workers in hazmat suits staffing checkpoints.

Shanghai detected another 3,500 cases of infection on Sunday, though all but 50 were people who tested positive for the coronavirus but were not showing symptoms of COVID-19. While people who are asymptomatic can still infect others, China categorizes such cases separately from “confirmed cases” — those in people who are sick — leading to much lower totals in daily reports.

Two police officers and a suspect dead after California shooting