People line up for nucleic acid testing during a citywide mass testing for the coronavirus in Tianjin. Reuters

Tianjin, a major Chinese port city near the capital Beijing, began mass testing of its 14 million residents on Sunday after a cluster of 20 children and adults tested positive for COVID-19, including at least two with the Omicron variant.

Residents will only get the green health code necessary to travel once they receive a negative result, it said.

Those infected include 15 students from 8 to 13 years old, a staff member at an after-school centre and four parents. The citywide testing is to be completed over two days. 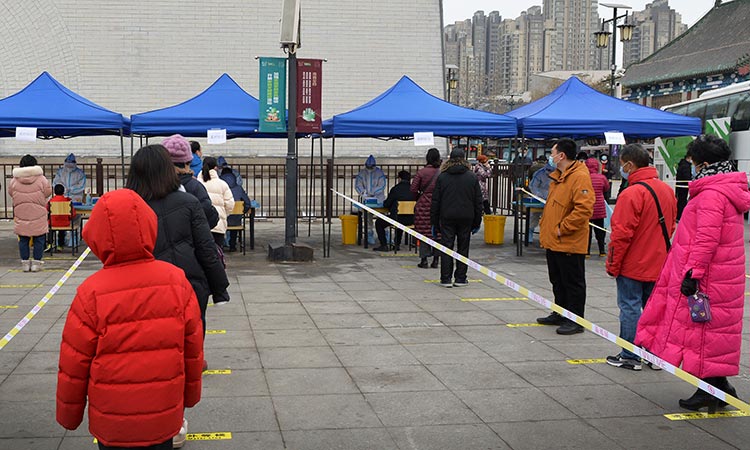 Residents wearing face masks line up to receive a swab for the coronavirus test in Tianjin on Sunday. AP

China has stepped up its zero tolerance COVID-19 strategy in the run-up to the Winter Olympics, which open Feb. 4 in Beijing. The Chinese capital is 115 kilometers (70 miles) northwest of Tianjin and connected by a high-speed rail link that takes less than one hour.

They include at least two cases of the Omicron variant, as well as 15 infections among elementary and middle school students, according to various state media reports.

The city near the capital Beijing launched its mass testing early Sunday, advising residents to stay at or near home to be available for the community-level nucleic-acid screening.

So far, however, no larger lockdown order was seen. 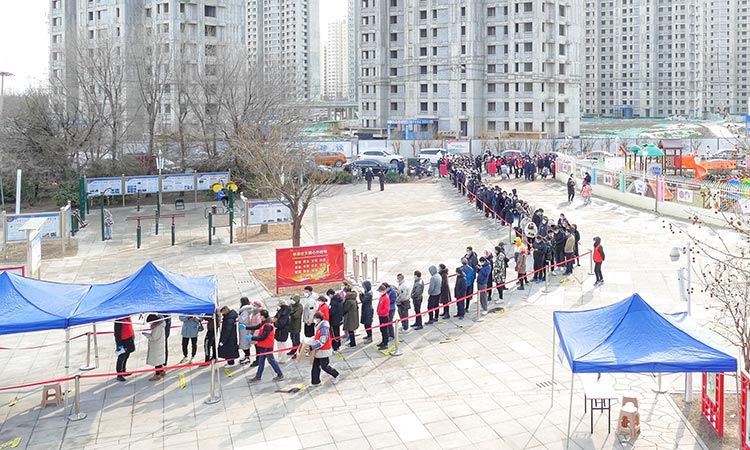 Long queues for nucleic acid testing for the coronavirus in Tianjin, China. Reuters

Millions of people are being confined to their homes in Xi’an and Yuzhou, two other cities that are farther away but have larger outbreaks. The city of Zhengzhou, a provincial capital 70 kilometers (40 miles) north of Yuzhou, is also conducting mass testing and closing schools starting Monday.

The first two cases confirmed in Tianjin were a 10-year-old girl and a 29-year-old woman working at the after-school center. Both were infected by the omicron variant. In subsequent testing of close contacts, 18 others tested positive and 767 tested negative as of Saturday night.

VIDEO: Egyptian TV anchor Shaima Jamal’s last message to all women before her husband killed her