Pakistan’s Chief of Army Staff General Qamar Javed Bajwa has been conferred with the King Abdulaziz Medal for making “significant contributions in defence cooperation” between Pakistan and Saudi Arabia, the Inter-Services Public Relations (ISPR) said in a statement on Sunday.

During the meetings, matters of mutual interest, bilateral defence and security cooperation and regional peace and stability were discussed.

The army chief said that Pakistan “values its historical and brotherly relations with the kingdom and acknowledges its unique place in the Islamic world.”

Both sides agreed upon enhancing defence cooperation in the fields of joint training, air defence, counter-terrorism and communication and information domain. 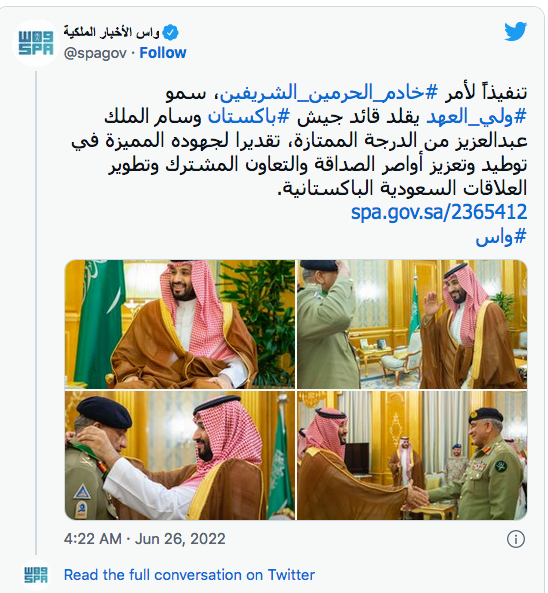 “They also agreed to further enhance cordial relations and deep spirit of brotherhood into enduring strategic partnership, being vital players in the region with significant responsibility towards unity of Muslim Ummah,” ISPR said.

Separately, the official Saudi Press Agency (SPA) reported that Prince Mohammed conferred Gen Bajwa with the King Abdulaziz Medal of Excellent Class for his “distinguished efforts in consolidating and strengthening bonds of friendship and joint cooperation and developing Saudi-Pakistani relations.” 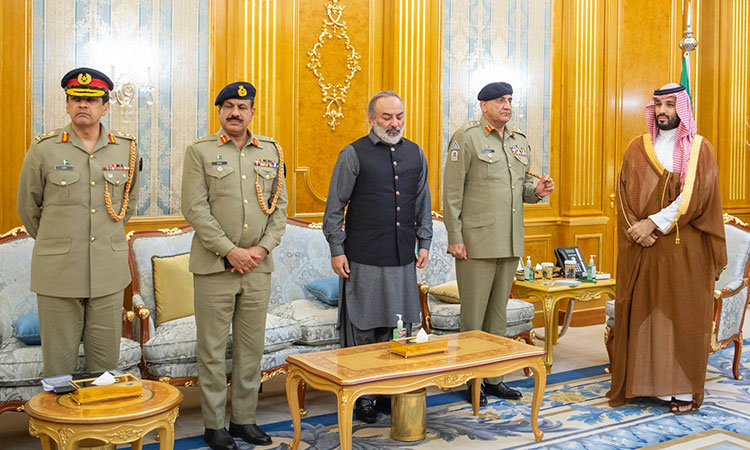 Gen Bajwa was received by Prince Mohammed, with whom a meeting was held on a host of issues, the SPA report said.

The meeting reviewed bilateral relations between the two countries, especially in the military fields, and opportunities for developing them. The two sides also deliberated upon a number of issues of common interest.

“In implementation of the order of the Custodian of the Two Holy Mosques King Salman Bin Abdulaziz Al Saud, HRH the Crown Prince decorated the Commander of the Pakistani Army with King Abdulaziz Medal of Excellent Class in recognition of his distinguished efforts in consolidating and strengthening bonds of friendship and joint cooperation and developing Saudi-Pakistani relations,” the SPA said. 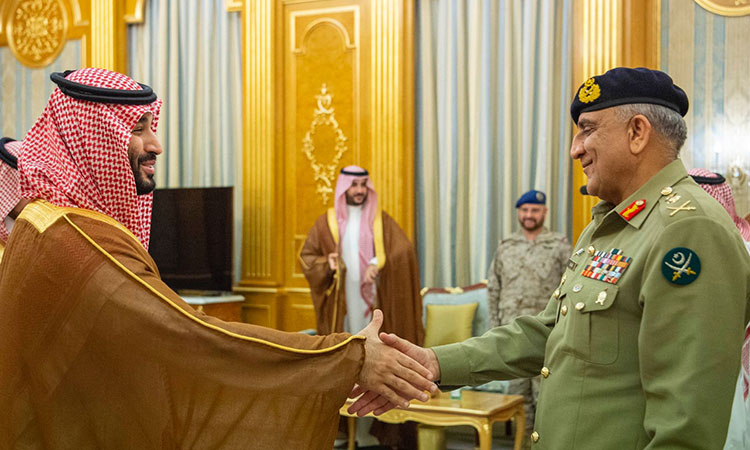 Saudi Prince Khalid Bin Salman Bin Abdulaziz, Chief of General Staff Lieutenant-General Fayyad Al Ruwaili, and a number of senior officials from both sides were also present on the occasion.

As per the Saudi media, the Order of King Abdulaziz, named after Saudi Arabia’s founding King Abdulaziz Al Saud, is considered the highest civilian honor in the Kingdom.

The order was officially inaugurated by King Faisal on March 20, 1971, it said, adding that the earlier version of the order was called ‘Great Chain of Badr’.