Rescuers clear the scene after a building was partialy destroyed as a result of Russian missile hit on two five-storey buildings in Chasiv Yar, eastern Ukraine, on Sunday. AFP

Ukraine also reported clashes with Russian troops on fronts in the east and south, while Moscow said its forces struck Ukrainian army hangars storing US-produced M777 howitzers, a type of artillery, near Kostyantynivka in Donetsk region.

Donetsk Governor Pavlo Kyrylenko said the strike on the apartment building took place on Saturday evening in the town of Chasiv Yar. The regional emergency service gave the death toll at 15 on Sunday afternoon, adding that 24 more people could still be under the rubble. 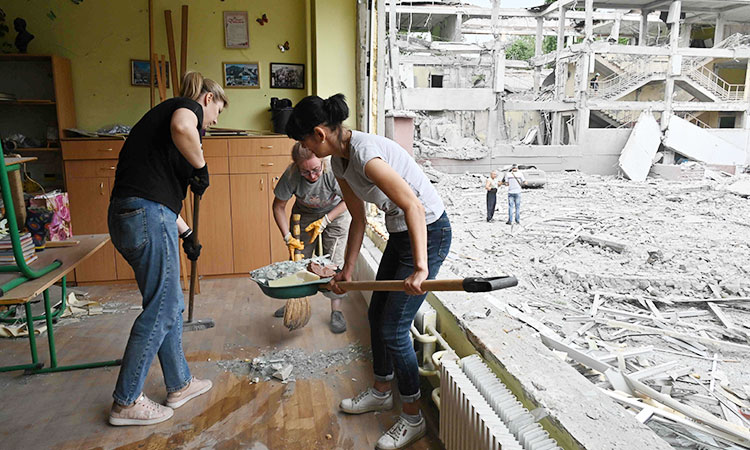 Teachers remove debris in the M.V. Lomonosov gymnasium in Kharkiv, after it was destroyed by a Russian missile strike. AFP

“We ran to the basement, there were three hits, the first somewhere in the kitchen,” said a local resident who gave her name as Ludmila, speaking as rescuers removed a body in a white sheet and cleared rubble using a crane as well as their hands.

“The second, I do not even remember, there was lightning, we ran towards the second entrance and then straight into the basement. We sat there all night until this morning.”

‘ALL COVERED IN BLOOD’

Another survivor, who gave her name as Venera, said she had wanted to save her two kittens. “I was thrown into the bathroom, it was all chaos, I was in shock, all covered in blood,” she said, crying. “By the time I left the bathroom, the room was full up of rubble, three floors fell down. I never found the kittens under the rubble.”

Kyrylenko wrote on Telegram that rescuers in Chasiv Yar had cleared nearly 99 tonnes of rubble from the site of the collapsed apartment block, and that rescue operations were still going on as of 4pm. 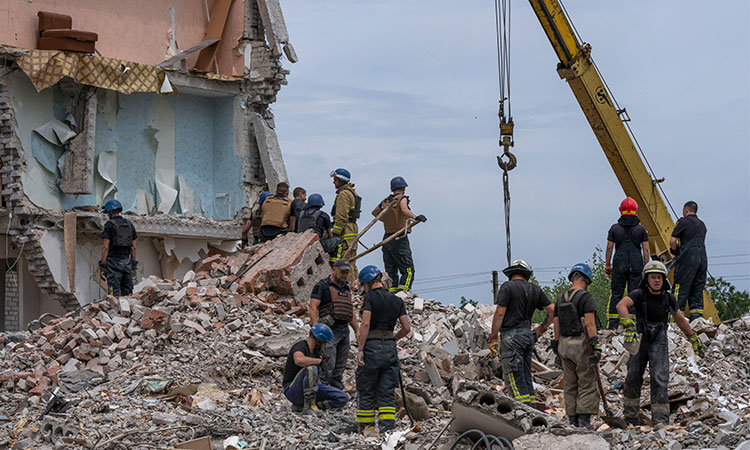 Rescue workers sift through rubble at the scene in the aftermath of a Russian rocket attack in Donetsk region. AP

Andriy Yermak, chief of staff to President Volodymyr Zelensky, said in a Telegram post that the strike was “another terrorist attack”, and that Russia should be designated as a state sponsor of terrorism as a result.

Luhansk and Donetsk provinces comprise the Donbas, Ukraine’s eastern industrial region that has become Europe’s biggest battlefield for generations. Russia wants to wrest control of the Donbas on behalf of the separatists that it supports.

Ukraine and the West call Moscow’s invasion an unprovoked war of aggression.

Russian forces attacked Ukrainian positions near the town of Sloviansk in Donetsk but were forced to withdraw, Ukraine’s military said, adding that Russian forces had launched a cruise missile attack on the northeastern city of Kharkiv from their side of the border. It gave no details of damage or casualties.

Luhansk region Governor Serhiy Gaidai said Russian forces were gathering in the area of the village of Bilohorivka, about 50km east of Sloviansk.

“The enemy is … shelling the surrounding settlements, carrying out air strikes, but it is still unable to quickly occupy the entire Luhansk region,” he said on Telegram.

Russia claimed control over all of Luhansk province last weekend. Russia’s defence ministry said its forces had destroyed two hangars near the Donetsk town of Kostyantynivka holding the US-made M777 howitzers, which it said had been used to shell residential areas of Donetsk.

Ukrainian military spokespeople were not immediately available for comment.

In the south, Ukrainian forces fired missiles and artillery at Russian positions including ammunition depots in the Chornobaivka area, Ukraine’s military command said.

Ukraine has been supported by Western military supplies and tough sanctions against Moscow as it resists the invasion that began on Feb.24.

But it suffered a diplomatic setback on Saturday when Canada said it would return a repaired turbine that Russia’s state-controlled Gazprom used to supply natural gas to Germany.

Ukraine had argued that a return would violate sanctions on Russia and the country’s energy and foreign ministries said in a statement on Sunday they were “deeply disappointed” by Canada’s decision.

The statement, published on the energy ministry’s website, called on the Canadian government to reverse its decision and said that returning the turbine would amount to adjusting the sanctions imposed on Moscow “to the whims of Russia.”