A view of the explosion as a Russian missile strike hits a shopping mall in Poltava region, Ukraine, on Tuesday. Reuters

Dozens of people were still missing on Wednesday after a Russian missile strike on a shopping mall in central Ukraine two days ago that killed at least 18, while a regional governor said the situation was “very difficult” in Lysychansk in the east.

Ukraine said Russia had killed civilians deliberately when it pounded the mall in Kremenchuk. Moscow said the mall was empty and it had struck a nearby arms depot.

“Russian missile hit this location precisely. De-li-be-ra-te-ly … It is clear that Russian killers received those exact coordinates,” Ukraine’s President Volodymyr Zelenskiy said in an evening video address. “They wanted to kill as many people.” 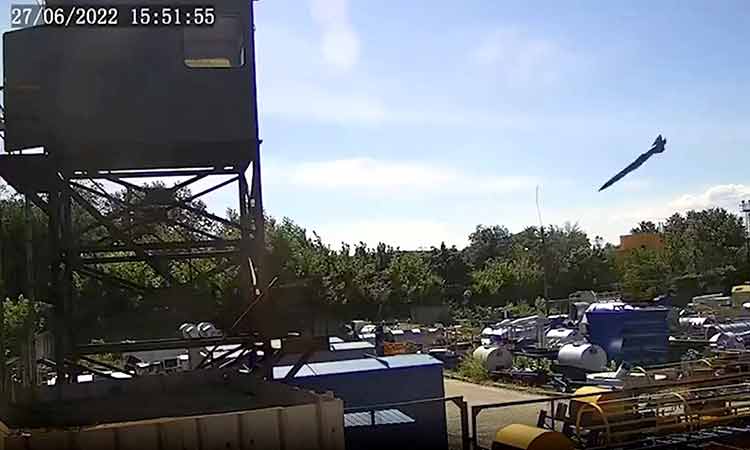 A Russian missile approaches a shopping mall at a location given as Kremenchuk, in Poltava region, Ukraine. Reuters

Further east in Lysychansk in the Luhansk region, a key battleground in Russia’s assault on the industrial heartland of Donbas, the governor reported increased military action.

“The Russians are using every weapon available to them … and without distinguishing whether targets are military or not – schools, kindergartens, cultural institutions,” he said.

“Everything is being destroyed. This is a scorched-earth policy.”

Russia has denied targeting civilian areas during its four-month offensive against Ukraine. The UN says at least 4,700 civilians have been killed since Russia invaded on Feb. 24.

In the Dnipropetrovsk region, towards the east, Governor Valentyn Reznychenko said Russia had fired six missiles, three of which were shot down. Rescue workers were searching for people under rubble in the city of Dnipro, he added.