A Go First flight takes off from an airport in India.

An Indian airline staff and a doctor saved the life of a passenger who suffered a cardiac arrest in midair.
The Go First flight from Kannur to Dubai suddenly complained of chest pain and fell unconscious.

Other passengers on the flight raised an alarm, prompting the staff to calm them down and look for a doctor.

Luckily a doctor was flying to Dubai.

With the help of the doctor and cabin crew, the patient came back to life. 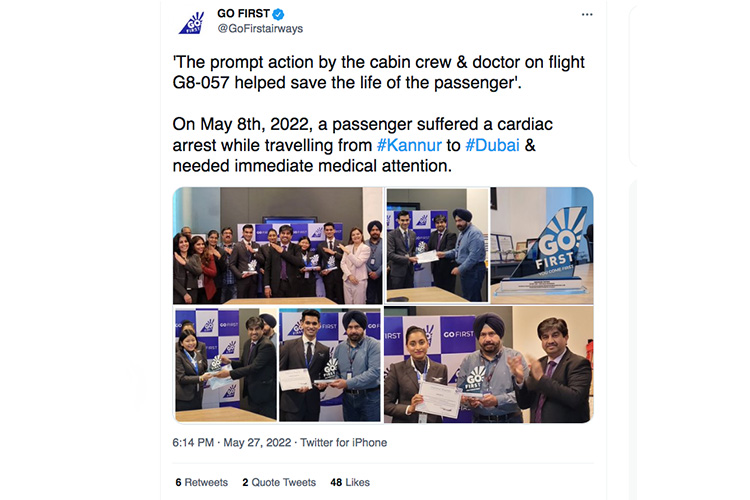 Go First congratulated the crew and the doctor on Twitter and said, “The prompt action by the cabin crew and doctor on flight G8-057 helped save the life of the passenger.”

The airline gave details, “On May 8th, 2022, a passenger suffered a cardiac arrest while travelling from Kannur to Dubai & needed immediate medical attention.”

Our crew members Abhishek , Shilpa, Sumeet & Imlitemsula were quick to respond & rushed to the aid of the passenger.

“From the rigorous training that the crew received, they were quick to calm fellow passengers & identify a doctor on board.

“Working together as a team, the doctor & a crew member performed CPR and used the AED to help the passenger recover from this life-threatening emergency. It was indeed a flight of angels — the crew & doctor that saved the life of the passenger!”

The airline said, “GO FIRST salutes the quick actions of its crew. Via a video conference call, Mr. Kaushik Khona,  CEO & other senior members of GO FIRST joined the passenger & the doctor in a felicitation ceremony to present mementos to the crew.

“What a beautiful way to encourage & set a great example of #YouComeFirst.”

Local media reported that Go First has handed over free tickets to both the doctor and the ill-fated passenger to fly to any domestic or international destination with the airline.

Dr. Shabeer is a Gastroenterologist at NMC Royal Hospital DIP.