Brand Dubai, the creative arm of the Government of Dubai Media Office (GDMO), in collaboration with the Roads and Transport Authority (RTA), on Monday announced that the Dubai Metro Music Festival is set to return from March 16-22.

During the week-long celebration of global music, Dubai Metro stations will become stages for live musical performances by local, regional and international musicians representing a range of musical genres. The Festival forms part of the ongoing #DubaiDestinations campaign focused on highlighting the exceptional experiences, events and activities of #DubaiArtSeason.

An eclectic line-up of 20 musicians will perform at five Dubai Metro stations – Expo 2020 Dubai, Jebel Ali, Mall of the Emirates, Burjuman and Union – from 4.00 pm to 10.00 pm. Metro commuters, who represent a microcosm of Dubai’s culturally diverse community, will be served a veritable treat of captivating musical performances featuring string, percussion, wind and other unusual instruments.

Rowdah Al Mehrizi, Director of Marketing & Corporate Communication, Corporate Administrative Support Services Sector, RTA, said: “The Roads and Transport Authority is delighted to work with Brand Dubai to bring to music lovers a second edition of the Dubai Metro Music Festival that promises another wonderful celebration of music from around the world.

We continue to work with partners like Brand Dubai to enhance the platform offered by the city for art and music to flourish, while also enriching the creative environment in the city by making global performing arts more accessible to the community. The Metro stations, which represent the world’s best transportation infrastructure, serve as wonderful stages not only to showcase the best of global music but also to highlight Dubai’s identity and values.”

“The initiative is part of a series of joint projects we have undertaken in cooperation with Brand Dubai to promote culture, art, creativity, heritage and aesthetic appreciation in the city in new unique ways.  We continue to be committed to forge strong bonds of cooperation with leading stakeholders and institutions to introduce initiatives that enhance the way both residents and visitors experience Dubai,” she added. 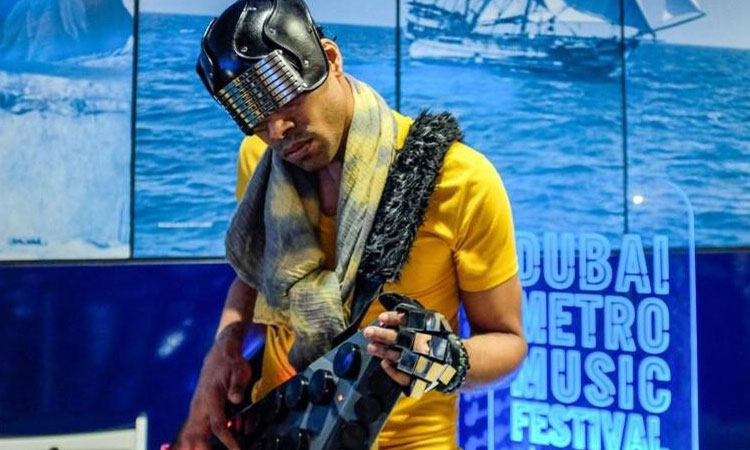 A musician performs at a metro station during the previous edition of the festival. File

Shaima Al Suwaidi, City Branding Manager, Brand Dubai, said: “The Metro Music Festival represents the quintessential spirit of cultural diversity and inclusiveness that is at the heart of Dubai’s ethos. Aligned with the vision of Vice President and Prime Minister of the UAE and Ruler of Dubai His Highness Sheikh Mohammed bin Rashid Al Maktoum to make Dubai one of the world’s best cities to live and visit, the Festival will add unique notes of creativity and beauty to the pulse of urban life.

The Festival brings together some of the most innovative musicians in the region and from across the world to engage with the public, enriching residents and visitors’ experience of Dubai and enabling them to connect with the city in new ways. The Festival is a celebration of the creativity, cosmopolitanism and openness that makes Dubai one of the world’s most culturally dynamic metropolises.”

“We are very happy to renew our partnership with RTA for the Dubai Metro Music Festival to offer people in the city the opportunity to enjoy unique cultural experiences blended into the city’s daily life.  We expect the second edition of the Festival, first launched in 2019, to be an even bigger draw among metro commuters and music lovers. The Festival is also set to further raise Dubai’s profile on the global cultural map as a hub for artists and musicians from across the world to showcase their talent,” she further said.

The vibrant lineup of musicians at the Festival includes traditional and experimental artists, street performers, classical instrumentalists and fusion musicians, who are considered among the most talented performers shaping the future of music in their respective countries.

Featuring innovative instruments and offbeat musical styles from both traditional and non-traditional genres of music, the performances at the Festival are expected to evoke a huge response from the public. All the performances will be rotated across the seven days of the festival to cover the five metro stations.