Sara Duterte takes her oath as vice president during rites in her hometown in Davao city on Sunday. Associated Press

Sara Duterte-Carpio, daughter of outgoing Philippine President Rodrigo Duterte, was sworn in as the country’s 15th Vice President on Sunday in their hometown of Davao City in Mindanao, calling for national unity following a divisive election campaign.

“The days ahead may be full of challenges that call for us to be more united as a nation,” she said in an inauguration address in her hometown Davao, where she took the oath of office with her parents standing next to her.

Duterte-Carpio, 44, was the running mate of Ferdinand Marcos Jr., who also won in the May 9 elections and will be sworn in as the country’s president on June 30, when their six-year term begins. 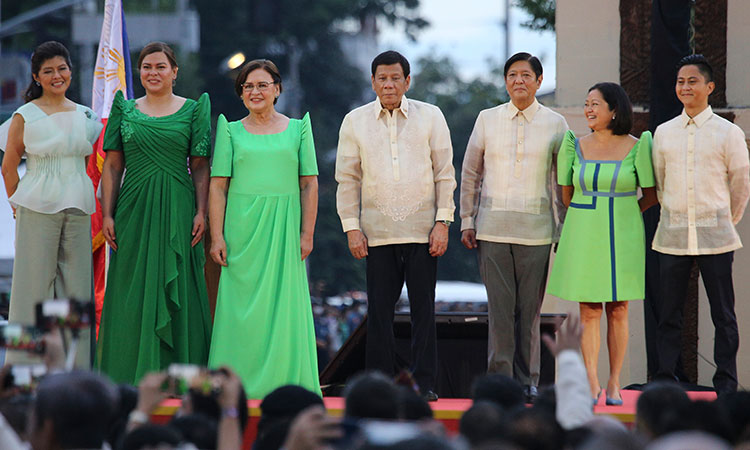 Sara took her oath, which was administered by Supreme Court Associate Justice Ramon Paul Hernando, a close friend and former law professor, at 3pm after attending mass at the San Pedro Catholic cathedral.

The oath-taking took place at the San Pedro Square near the City Hall of Sara’s hometown of Davao where she will continue to serve as the mayor until June 30 when her term as the vice president would officially start.

Aside from members of her immediate family led by her father, the president, Sara earlier confirmed that President-elect Ferdinand “Bongbong” Marcos had accepted her invitation to attend her inauguration.

The top officials as well as foreign diplomats invited, Sara said, included then president Gloria Macapagal-Arroyo who was reelected as congresswoman of her home province of Pampanga in Central Luzon.

Her mother, Elizabeth Zimmerman, who is legally separated from the president, held the Bible during her oath-taking which was also witnessed by her brothers, Sebastian who will succeed her as the mayor of Davao and Paolo, who was reelected as city congressman. 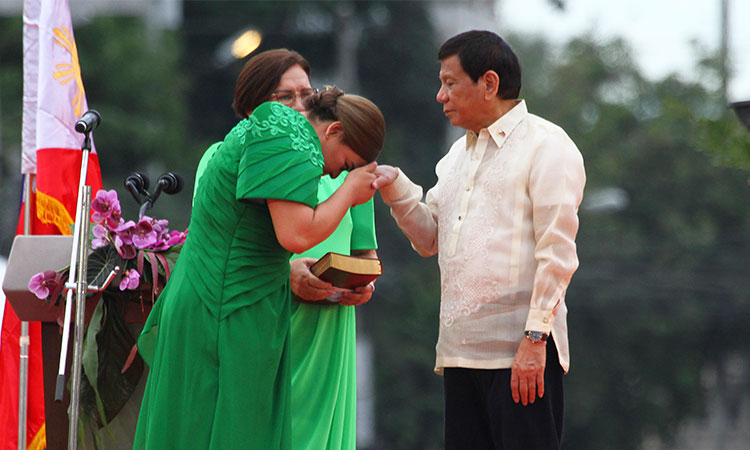 Sara Duterte places the hands of her father on her forehead as a sign of respect during oath taking rites. AP

Colonel Alberto Lupaz, the city police chief, said about 2,000 lawmen have been assigned to secure the venue as well as impose strictly basic coronavirus protocols like the mandatory wearing of face mask. He estimated that about 25,000 residents attended the inauguration.

Sara’s oath-taking occurred 11 days before the official start of her term as the vice president on June 30. Under the constitution, the terms of the president and vice president are fixe for six years each with no reelection.

Sara’s spokesman said the taking her oath at her hometown was one way of thanking the people of Davao City and the whole of Mindanao for their support in electing her to positions as mayor and as the country’s 15th vice president.