A videograb shows the Guitarfish off Ras Al Khaimah.

An Emirati fisherman in Ras Al Khaimah spotted a rare type of fish, about 8 kilometres from the coast of Khor Al Jazirah Al Hamra in the emirate.

The fish is known locally among some fishermen as “Bayada,” and it is scientifically called “Guitarfish”.

Fishermen confirmed that this type of fish is rarely seen moving near the surface of the water.

The fish was documented by Al-Nokhada Hamid Al-Zaabi, despite the high surface water temperatures during the summer. 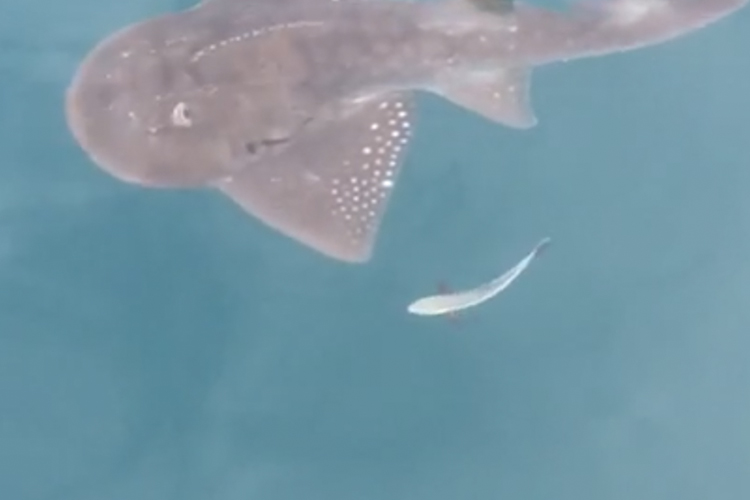 The Guitarfish was half a metre long.

Dr. Saif Al Ghais, Director General of the Environment Protection and Development Authority in Ras Al Khaimah, said that this species is classified as a round-headed cartilaginous fish, or the head is semi-circular and pointed, explaining that this species belongs to the same group that includes the locally known “licorice fish.”

In the coasts of the country, it is a rare species.

Al-Zaabi, a worker on the coast of Al-Jazirah Al-Hamra area in Ras Al-Khaimah, said: “This species is about one and a half a metre long. It is peaceful and not dangerous,” noting that he spotted it at eight in the morning, and was moving against the current.

Al-Zaabi pointed out that this type of fish “has been known since the time of the my father and grandfather, from the pioneers and veteran fishermen working on the coasts of the Emirates during previous eras, and it is one of the types of marine life that is not to be eaten in the country.”

No separate ID services for residents except Dubai from May 16