Vehicles are on fire at an oil depot after missiles struck the facility in an area controlled by Russian-backed separatist forces in Makiivka, eastern Ukraine, on Wednesday. AP

The European Union (EU) proposed its toughest sanctions yet against Russia on Wednesday, including a phased oil embargo, as Kyiv said Moscow was intensifying an offensive in eastern Ukraine and close Russian ally Belarus announced large-scale army drills.

Britain has also announced a further raft of sanctions against Russia, banning the country from doing business with management consultants, accounting and public relations firms in the UK.

Nearly 10 weeks into a war that has killed thousands of people, uprooted millions and flattened Ukrainian cities, Russia was intensifying its assault, Ukraine’s defence ministry said, with nearly 50 air strikes carried out on Tuesday alone.

A new convoy of buses began evacuating more civilians from the ravaged southeastern port city of Mariupol, which has seen the heaviest fighting of the war so far and where Moscow said remaining Ukrainian forces remained tightly blockaded. 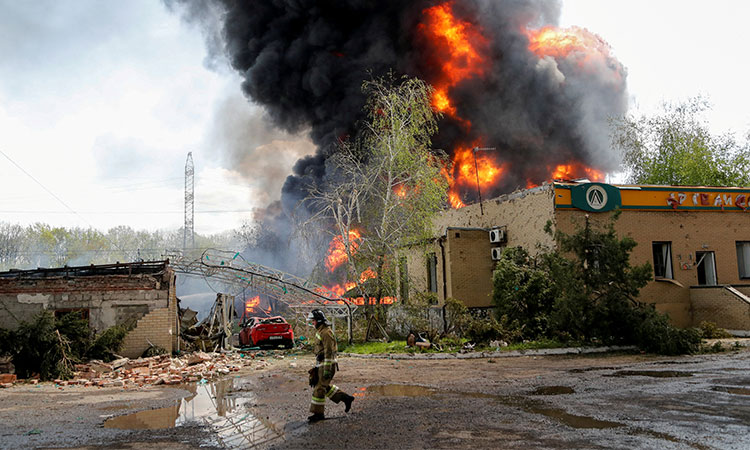 Smoke rises above a burning oil storage in the course of the Ukraine-Russia conflict on the outskirts of Donetsk. Reuters

Piling pressure on Russia’s already battered $1.8 trillion economy, the European Commission proposed phasing out imports of Russian crude oil within six months and refined products by the end of this year, sending the price of Brent up 4% to more than $109 a barrel.

The plan, if agreed by EU governments, would be a watershed for the world’s largest trading bloc, which remains dependent on Russian energy and must find alternative supplies. 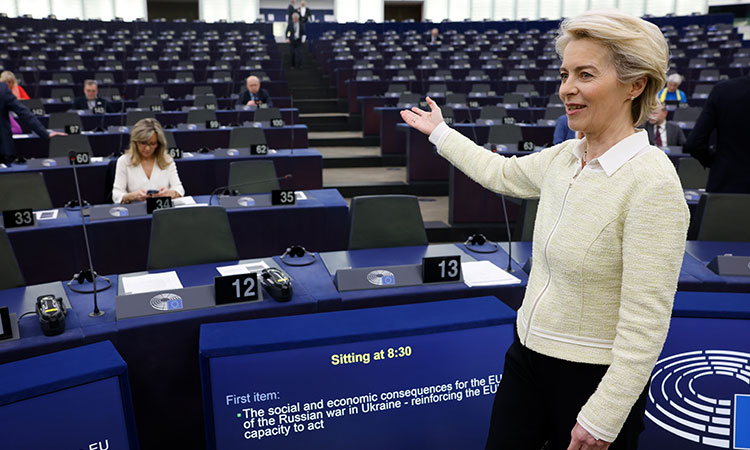 Ursula von der Leyen delivers her speech during a debate on war in Ukraine at the European Parliament in Strasbourg. AFP

With the Czech Republic, Bulgaria, Hungary and Slovakia all seeking more time to adapt, there was no immediate deal, an official familiar with the talks said. EU envoys were expected to move closer to agreement when they meet again on Thursday.

Brussels has also proposed freezing the assets of Patriarch Kirill, head of the Russian Orthodox Church, adding him to a draft blacklist of hundreds of individuals accused of supporting the war, a diplomat said on Wednesday.

The EU has yet to target Russian natural gas, used to heat homes and generate electricity across the bloc and harder to replace than Russian crude.

The Kremlin said Russia was weighing various responses to the EU plans, adding that the sanctions would increase costs for European citizens.

On the war front, Russian Defence Minister Sergei Shoigu renewed a warning that Moscow would seek to hit shipments of weapons into Ukraine by the United States and its Nato allies.

Russia published what it said was video footage of two Kalibr cruise missiles being launched from the Black Sea and said they hit unspecified ground targets in Ukraine.

Announcing its surprise military drills, Belarus’s defence ministry said they posed no threat to its neighbours, but Ukraine’s border service said it could not rule out that Belarusian forces might join Russia’s assault. “Therefore, we are ready,” spokesman Andriy Demchenko said.

Some Russian forces entered Ukraine via Belarus when the invasion began on Feb. 24 but Belarusian troops have not been involved so far in what Moscow calls a “special military operation” to disarm Ukraine and defend its Russian-speaking population from fascists.

Kyiv and its Western backers say Moscow’s fascism claim is an absurd pretext for an unprovoked war of aggression that has driven more than five million Ukrainians to flee abroad.

The Kremlin on Wednesday dismissed speculation Putin would formally declare war on Ukraine and decree a national mobilisation on May 9, when Russia commemorates the Soviet Union’s victory over Nazi Germany in World War Two. Putin is due to deliver a speech and oversee a military parade on Moscow’s Red Square.

‘WE ARE NOT AFRAID’

The convoy leaving Mariupol, organised by the United Nations and the International Committee of the Red Cross, was heading for the Ukrainian-controlled city of Zaporizhzhia, Donetsk Governor Pavlo Kyrylenko said.

He did not say how many buses were in the convoy or whether any more civilians had been evacuated from the vast Azovstal steel works, where the city’s last defenders are holding out against Russian forces that have seized Mariupol.

The first evacuees from Azovstal arrived by bus in Zaporizhzhia on Tuesday after cowering for weeks in bunkers beneath the sprawling Soviet-era works.

The mayor of Mariupol, Vadym Boichenko, reported heavy fighting at Azovstal on Wednesday and said contact with the Ukrainian fighters there had been lost. More than 30 children are among the civilians there awaiting evacuation, he added.

Russia pummels port of Odesa in attempt to disrupt supplies