Rahul Gandhi enjoys a evening at resort in Kathmandu.

After controversy over his appearance at a Kathmandu nightclub, Congress leader Rahul Gandhi has been shifted to a resort town near the Kathmandu Valley.

Gandhi, who arrived in Kathmandu on Monday evening to attend a wedding of his Nepalese friend, Sumnima Udas, had previously stayed at a five-star hotel in Kathmandu.

Rahul’s visit to Kathmandu sparked controversy after he was seen with a woman at a Kathmandu nightclub on Monday night.

A video went viral in India. Some even criticized that the woman, who was seen with Rahul at the nightclub, was China’s ambassador to Nepal, Hou Yanqi.

“How can you imagine a diplomat joining the leader of a foreign nation in a third country at midnight,” security sources said, adding that it was an unfounded rumour and there was no truth to it.

It could be someone from the bride’s family, an official added.

Many people stuck with the idea that the woman accompanying the Congress party leader was Yanqi.

Many expressed concerns about this, wondering why he met with a supposed Chinese envoy in a nightclub, and what they were talking about. According to India Today Anti Fake News War Room (AFWA) found that the woman in the video was a friend of the bride at the wedding that Rahul Gandhi was attending in Nepal.

She was not a Chinese diplomat.

After the wedding ceremony, Rahul and a few other guests present at Udas’ wedding moved to Lakhuri Bhanjyang-based lavish resort, the Terrace Resort, on Tuesday, two security officials confirmed to reporters.

The Terrace Resort is located on the outskirts of the Kathmandu Valley and is famous for its tours of the majestic Himalayas, which also offers organic food to its guests. 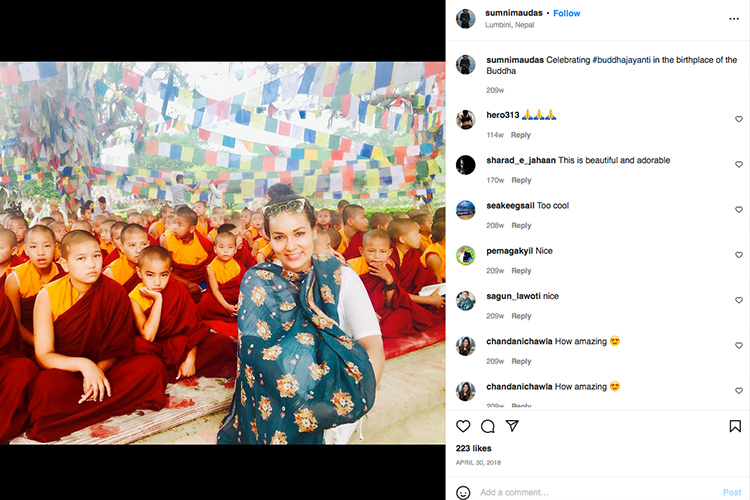 After Rahul’s visit sparked controversy in the Indian media, the Nepalese police deployed plainclothes security personnel for his safety.
Rahul and some of his Indian friends, who came to attend Sumnina’s wedding service, would stay in Kathmandu until Friday.

The Udas family hosted a reception on Friday evening at a five-star hotel in Kathmandu. Sumnima is the daughter of former Nepali ambassador to Myanmar, Bhim Udas. Sumnima, a former CNN correspondent, has married Nima Martin Sherpa.

Sherpa family owns many family businesses in Nepal, including hotels, resorts, and manufacturing units among others. Currently, Sumnina is working on a project in Lumbini where she is setting up a Buddhist Museum in Lumbini, the birth place of Gautam Buddha.

Sumnima was working as CNN’s correspondent in New Delhi and was responsible for covering key political, economic, social, environmental, and general interest stories from the country.

When she was in Delhi with CNN, it is said that Rahul and Sumnina became friends. According to CNN’s website, she covered the 2014 Indian General Elections, the diplomatic row between India and the US after the arrest of an Indian diplomat, and the various rape cases like Nirbhaya.

Udas travelled to Malaysia to report on the missing Malaysia Airlines flight MH370. She also investigated the barbaric kidney trafficking trade in Nepal for CNN. Udas was awarded the ‘Journalist of the Year’ prize at the inaugural Women’s Empowerment (WE) Journalism Awards in March 2014 for her reporting on gender issues.

In August 2018, Rahul Gandhi had visited Kathmandu on his way to Kailash Mansarovar, a famous pilgrimage site in the Tibet Autonomous Region in China.