A polling agent verifies the name of a person before he casts his vote at a polling station in Bachiwind, Amritsar. AP

India’s Punjab is all set for a multi-cornered contest where a 2.14 crore electorate, including 1.02 crore women, will cast votes on Sunday for the 117-member Assembly.

The hot seats comprise Amritsar (East) from where Congress state unit chief Navjot Sidhu is in the race to retain it and Dhuri from where AAP’s chief ministerial face Bhagwant Mann is trying his luck for the first time.

The scene underscored the changing electoral landscape in India’s Punjab state, where more than 21 million voters will cast ballots on Sunday in polls that are seen as a barometer of Prime Minister Narendra Modi and his party’s popularity ahead of general elections in 2024. 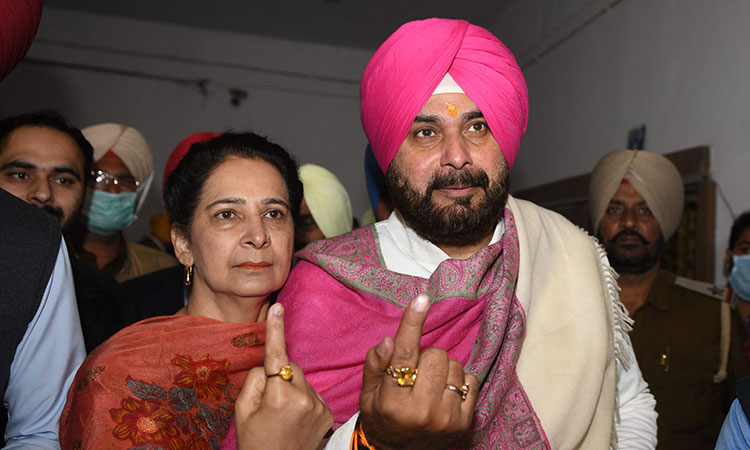 The polls will indicate whether riding the crest of the yearlong protests that forced Modi to make a rare retreat could be enough to prevent his party from making inroads in a state considered the “grain bowl” of India.

The youngest in the political landscape is controversial crowd-puller candidate Sidhu Moosewala, while the eldest one is Shiromani Akali Dal (SAD) patriarch Parkash Singh Badal, 94, whose feet were touched by Prime Minister Narendra Modi owing to humility after filing his nomination papers for the Varanasi Lok Sabha constituency in 2019.

In the Punjab polls, 1,304 candidates — 1209 men, 93 women and two transgenders — are in the fray, Chief Electoral Officer S. Karuna Raju told the media on Saturday. The counting of votes will be held on March 10. 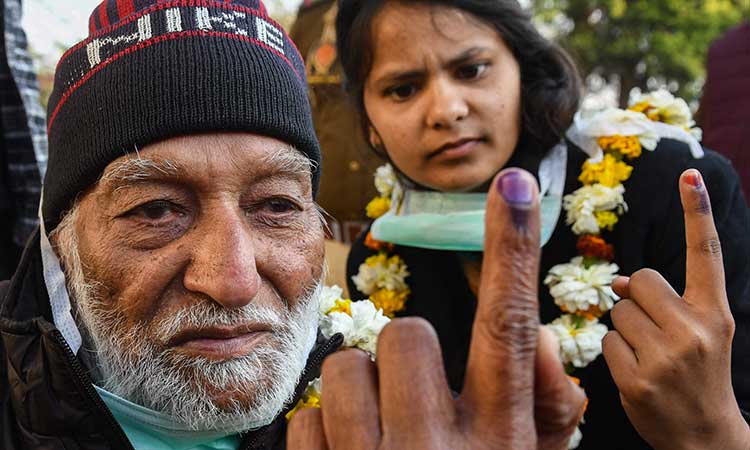 Voters show their inked finger after casting their ballot at a polling station on the outskirts of Amritsar on Sunday. AFP

Modi’s party implemented the controversial farm laws in September 2020 using its executive powers and without any consultation in the Parliament. His administration billed them as necessary reforms, but farmers feared the laws signaled the government was moving away from a system in which they sold their harvest only in government-sanctioned marketplaces. They worried this would leave them poorer and at the mercy of private corporations.

The laws triggered a year of protests as angry farmers – most of them Sikhs from Punjab state – camped on the outskirts of New Delhi through a harsh winter and devastating coronavirus surge. In a major reversal, Modi withdrew the laws a year later in November, just three months ahead of the crucial polls in Punjab and four other states. The election results will be announced on March 10.

Modi’s Bharatiya Janata Party has a relatively small footprint in Punjab but hopes to form a government there with a regional ally and strengthen its fledgling voter base among farmers, one of the largest voting blocs in India. Punjab, where people are deeply proud of their state’s religious syncretism, also represents a test for his party’s Hindu nationalist reach, which has flourished in most of northern India since 2014.

Meanwhile, Modi’s party is running its campaign by trying to frame the incumbent Congress party government as corrupt. It is also making grand promises to create more jobs, provide farm subsidies and free electricity for farmers, and eradicate the drug menace that has ailed the state for years.

Experts say the moves are intended to placate the angry farmers and that the elections were a major reason behind Modi’s sudden decision to withdraw the laws.

That anger, however, runs deep.

More than 700 farmers died during the protests as they weathered brutal cold, record rains and sweltering heat, according to Samyukt Kisan Morcha, or the United Farmers Front, the umbrella group of farm unions that organized the agitation. Dozens also died by suicide.

But in December last year, Agriculture Minister Narendra Singh Tomar told Parliament that his government had no record of the farmers’ deaths. This caused widespread anger among the families of the deceased, many of whom are small or landless farmers who constitute the lowest rung of India’s farming community. 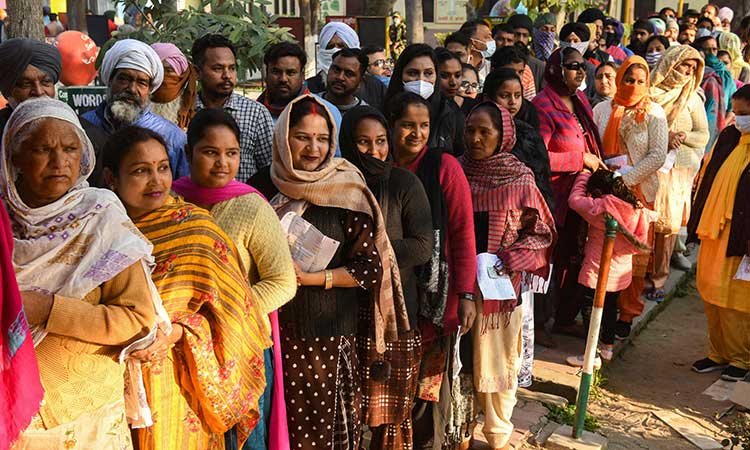 Voters queue up to cast their ballot at a polling station in a village on the outskirts of Amritsar on Sunday. AFP

“Where did those 700-750 farmers go then? The Modi government is responsible for their deaths,” said Amarjeet Singh, choking back tears in his family home in Kaler Ghuman village, some 40 kilometers (24 miles) from Amritsar, the state’s capital.

Singh’s father, Sudagar Singh, died on a sweltering September afternoon from sudden cardiac arrest, according to his death certificate. At the time of his death, he was accompanied by his friend Charan Singh, the village head, who said the 72-year-old collapsed while returning home after spending weeks at the protests.

“Even though we won in the end, those laws only brought misery to our lives. Do you think we would forget that?” said Singh, pointing to a framed portrait of his friend.

Scarred by the death, Sudagar Singh’s younger brother fell into depression, the family said. He stopped eating and working on his farm. Three months later, he too died.

In some cases, the Punjab government has announced jobs and funds for the families of the deceased, but farmers say the elections are an opportunity to turn their anger into meaningful change.

“That’s why you don’t see flags of any political party flying atop our homes,” said Singh, the village head. “We don’t trust them anymore.”