Buses carrying Ukrainian service members who have surrendered arrive at a detention facility in Olenivka. Reuters

Concerns grew on Wednesday for the welfare of more than 250 Ukrainian fighters who surrendered to Russian forces at the Azovstal steelworks in Mariupol after weeks of desperate resistance.

The surrender brought an end to the most devastating siege of Russia’s war in Ukraine and allowed President Vladimir Putin to claim a rare victory in his faltering campaign, which many military analysts say has stalled.

Over 260 Ukrainian troops evacuated from Mariupol, ceding control to Russia

Buses left the steelworks late on Monday in a convoy escorted by Russian armoured vehicles. Five arrived in the Russian-held town of Novoazovsk, where Moscow said wounded fighters would be treated.

Seven buses carrying Ukrainian fighters from the Azovstal garrison arrived at a newly reopened prison in the Russian-controlled town of Olenivka near Donetsk, a Reuters witness said. 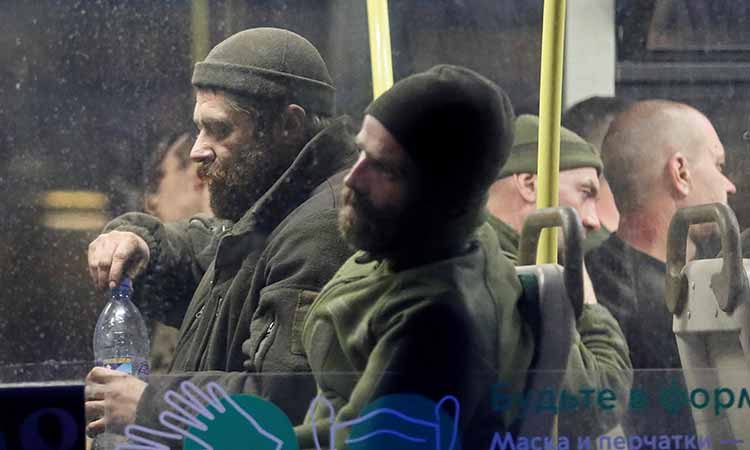 Russia said at least 256 Ukrainian fighters had “laid down their arms and surrendered”, including 51 severely wounded. Ukraine said 264 soldiers, including 53 wounded, had left.

Russian defence ministry video showed fighters leaving the plant, some carried on stretchers, others with hands up to be searched by Russian troops.

There were some women aboard at least one of the buses in Olenivka, Reuters video showed.

While both sides spoke of a deal under which all Ukrainian troops would abandon the steelworks, many details were not yet public, including how many fighters still remained inside, and whether any form of prisoner swap had been agreed. 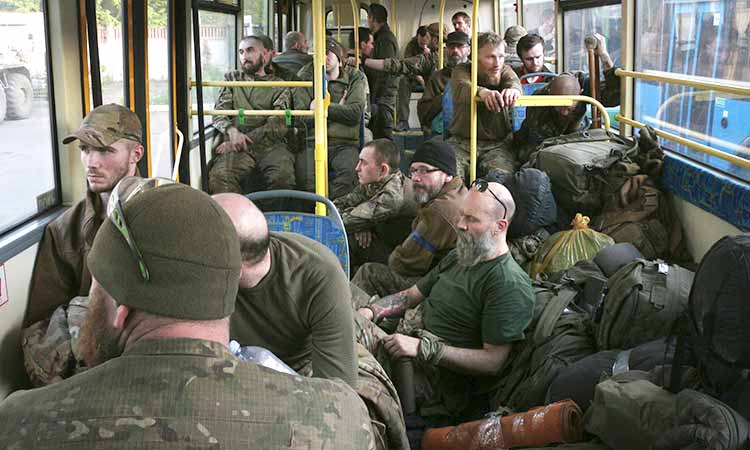 Ukrainian servicemen sit in a bus after they were evacuated from steel plant in Olyonivka, Ukraine. AP

The Kremlin said Putin had personally guaranteed the prisoners would be treated according to international standards, and Ukrainian officials said they could be exchanged for Russian captives.

Russian Deputy Ambassador to the United Nations Dmitry Polyansky said there had been no deal, tweeting: “I didn’t know English has so many ways to express a single message: the #Azovnazis have unconditionally surrendered.”

TASS news agency reported a Russian committee planned to question the soldiers, many of them members of the Azov Battalion, as part of an investigation into what Moscow calls “Ukrainian regime crimes”.

High-profile Russian lawmakers spoke out against any prisoner swap. Vyacheslav Volodin, speaker of the State Duma, Russia’s lower house, said: “Nazi criminals should not be exchanged.” 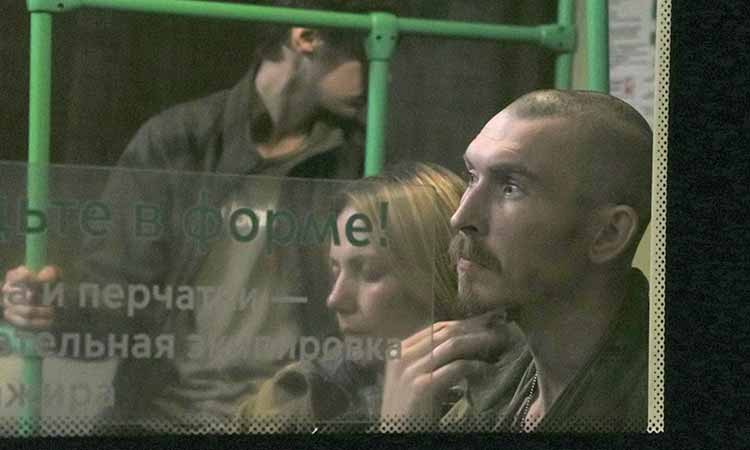 Ukrainian servicemen sit in a bus after they were evacuated from the Mariupol’s Azovstal steel plant. AP

Lawmaker Leonid Slutsky, one of Russia’s negotiators in talks with Ukraine, called the evacuated combatants “animals in human form” and said they should be executed.

Formed in 2014 as an extreme right-wing volunteer militia to fight Russian-backed separatists, the Azov Regiment denies being fascist or neo-Nazi. Ukraine says it has been reformed and integrated into the National Guard.

Natalia, the wife of a sailor among those holed up in the plant, told Reuters she hoped “there will be an honest exchange”. But she was still worried: “What Russia is doing now is inhumane.”

On the diplomatic front, US President Joe Biden will host the leaders of Sweden and Finland at the White House on Thursday to discuss their NATO applications, the White House said. The Nordic countries are optimistic they can overcome objections from Turkey over jointing the 30-nation alliance.