Under the patronage and presence of Sheikh Hamdan Bin Zayed Al Nahyan, Ruler’s Representative in Al Dhafra Region and Chairman of the Board of Directors of the Environment Agency — Abu Dhabi (EAD), the Agency released a batch of sea turtles at Saadiyat Beach, one of the main sites for sea turtles in the Emirate of Abu Dhabi.

The released group came from a batch of 250 turtles, which were rescued and rehabilitated by EAD.

Sheikh Hamdan Bin Zayed was accompanied by his children at the turtle release. The turtles were successfully rehabilitated after being discovered and rescued last year with the help of the public, sea-goers, fishermen, EAD rangers, and several other partners.

The turtles were rehabilitated at the Sea Turtle Rehabilitation Centre at The National Aquarium, where they received advanced veterinary care and were treated from diseases and injuries.

During the release, one of the turtles was named Marawah, which symbolises Marawah Island in Abu Dhabi. A satellite tracking device was fixed on its back to track its path, monitor its movements and identify its nesting sites and feeding areas. The collated data will enhance the Agency’s efforts to develop plans and programmes that will contribute to sea turtle conservation, while reducing and mitigating the risks they encounter. 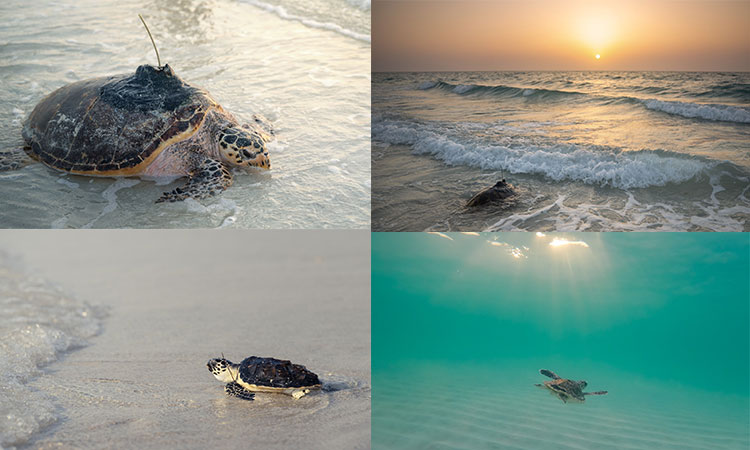 The released group came from a batch of 250 turtles, which were rescued and rehabilitated by the Agency. WAM

The Agency has been researching, monitoring and protecting turtles in Abu Dhabi since 1999 and has succeeded in maintaining a stable population in territorial waters across the emirate. Since then, studies have shown an improvement in the number of turtles and their stability in the emirate. Abu Dhabi’s waters are home to more than 5,000 sea turtles, from both the Green and Hawksbill species.

The number of Green turtles ranges between 3,500-4000, while Hawksbill turtles are found in smaller numbers, estimated at about 1,000-1,500 turtles. At least 150 nests are laid annually by the Hawksbill turtles on the shores of the islands and the main coast of the Emirate of Abu Dhabi.

Among the most important nesting islands are Zirku, Jarnain, Dinah, and Saadiyat Beach.

In 2020, EAD and The National Aquarium signed a cooperation agreement to enhance efforts to preserve wildlife in the Emirate of Abu Dhabi. As a result, the largest centre in the region specialised in rehabilitating turtles and marine life was launched, treating injured or rescued turtles and enabling their return to natural habitats, as well as expanding the scope of studies and scientific research. 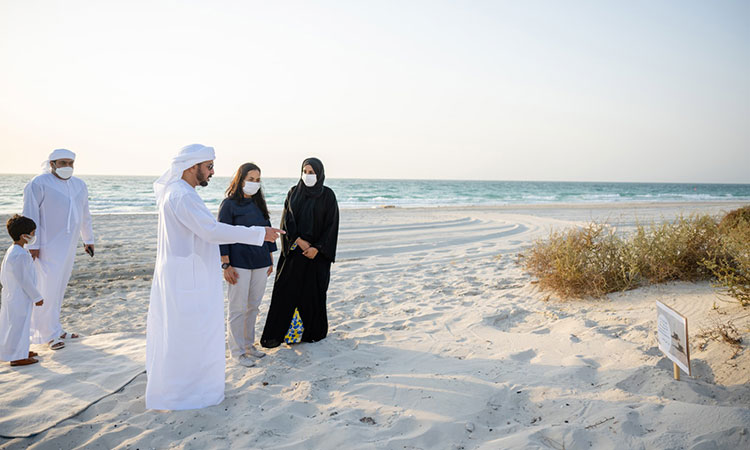 Hamdan Bin Zayed being briefed at the site of the turtle release. WAM

During the event, Sheikh Hamdan Bin Zayed met Cynthia Hareb, one of the volunteers in environmental work, and listened to her role in saving turtles, monitoring any nests near their site of residence on Saadiyat Island, and coordinating with specialists in EAD.

He valued her efforts in raising community members’ awareness of the importance of preserving threatened marine species.