Sheikh Hamadan and other dignitaries during the opening of new campus of the University of Birmingham in Dubai.

Commenting on the occasion, Sheikh Hamdan said Dubai places high priority on building the best possible environment for private universities to flourish in line with the vision of His Highness Sheikh Mohammed Bin Rashid Al Maktoum, Vice President and Prime Minister of the UAE and Ruler of Dubai, to transform Dubai into a prominent global education destination.

Spanning an area of 30,000 square metres, the new campus of the University of Birmingham Dubai offers 46 academic programmes including Biomedical Science, Accounting, Computer Science, Artificial Intelligence and others.

“The institution is among the top 100 universities in the world, which makes it one of the highest-ranked universities in Dubai and the region. 10 of its researchers have received the Nobel Prize,” Sheikh Hamdan said.

“Many more prominent universities are set to join Dubai International Academic City in the near future,” he added. 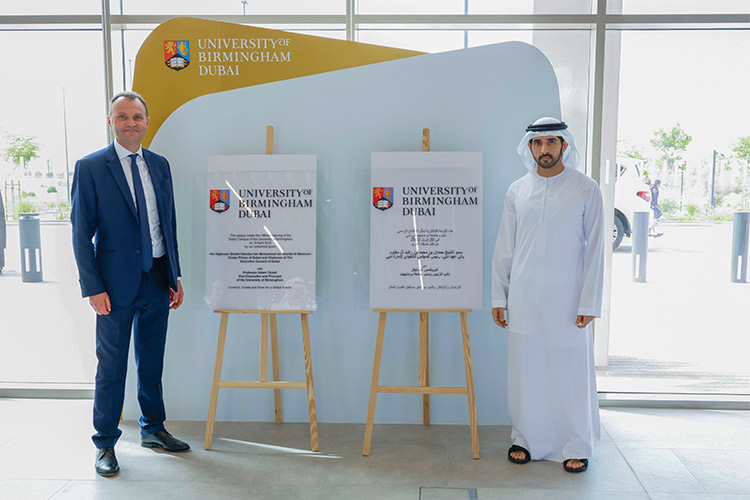 “Dubai, which is home to 46 private universities, has emerged as a leading focal point for higher education that attracts thousands of international students. We aim to make Dubai a global education hub that welcomes students from all over the world,” Sheikh Hamdan added.

Sheikh Hamdan highlighted the efforts of the UAE and Dubai to enhance higher education as part of its efforts to equip students with the skills needed to succeed in the job market of the future and support the development of an economy based on knowledge and innovation.

The new campus spanning an area of 30,000 square metres features hi-spec laboratory spaces, state-of-the-art learning facilities, an innovation room, large classrooms, as well as a library across two floors, in addition to many other facilities that offer an ideal educational environment for all students.

Described as an intelligent campus, the new smart Dubai campus has been specifically designed to embrace sustainable practices, ensuring the University leads the way in corporate environmental responsibility.

The university deploys some remarkable techniques and technologies to reduce its impact in both Birmingham and Dubai, including installing 23,000 Internet of Things (IoT) sensors which can adjust lighting based on occupancy and environmental changes, in line with the university’s vision to become net zero by 2035.

Uniquely designed in the shape of a crescent moon and inspired by the historic Aston Webb buildings in Birmingham, the new campus will visually fuse the history and stature of Edgbaston campus with the heritage, tradition and beauty of Arabic culture and architecture.