An electoral worker sits next to boxes at the Justice Palace in Jdeideh, Lebanon, on Monday. Reuters

Lebanon’s Hizbollah group and its allies have lost the parliament majority they had held since 2018, according to final results from the Lebanese elections released on Tuesday. Hizbollah’s most vocal opponents and more than a dozen independents have made gains, the results show.

The Hizbollah-led coalition ended up winning 61 seats in the 128-member legislature, a drop of 10 members since the last vote was held four years ago.

The biggest winner turned out to be the nationalist Christian Lebanese Forces party led by Samir Geagea, one of the harshest critics of Hizbollah. Another big winner is Druze leader Walid Joumblatt whose group won all eight seats they were running for.

The Lebanese Forces now has the largest bloc in parliament with 19 seats, replacing Hezbollah’s main Christian allies of the Free Patriotic Movement that was founded by President Michel Aoun. The movement now holds 17 seats, a drop of three seats since the previous vote. 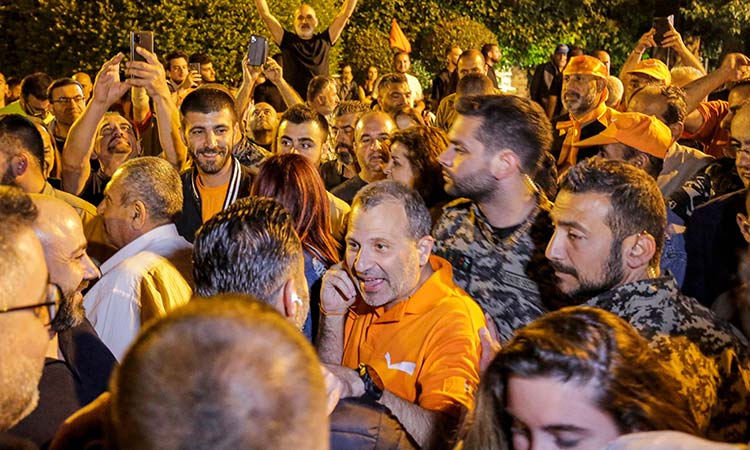 Despite the setback, Hizbollah and its main Shiite ally, the Amal group of Parliament Speaker Nabih Berri, retained the 27 seats allocated to the Shiite sect.

Independents and newcomers, including those from the 2019 protest movement, scooped 14 seats. That was a major achievement considering they went into the vote fragmented and facing intimidation and threats by entrenched mainstream parties.

Their showing sends a strong message to ruling class politicians who have held on to their seats despite an economic meltdown that has impoverished the country and triggered the biggest wave of emigration since the 1975-90 civil war.

Sunday’s parliamentary elections were the first since Lebanon’s economic meltdown began in late 2019. The government’s factions have done virtually nothing to address the collapse, leaving Lebanese to fend for themselves as they plunge into poverty, without electricity, medicine, garbage collection or any other semblance of normal life.

The vote is also the first since a deadly explosion at Beirut’s port in August 2020 that killed more than 200, wounded thousands and damaged parts of the capital.