As the counting of votes for Punjab’s by-elections continues, unofficial, preliminary results have begun to trickle, showing that the Pakistan Tehrik-e-Insaf (PTI) is currently in the lead.

As per unofficial results, PTI has emerged victorious in Multan, Sahiwal and Dera Ghazi Khan.

According to details, Imran Khan’s party is in the clear lead on 15 constituencies. The polling continued till 5pm in most districts with Section 144 implemented to establish law and order in the province on Sunday. 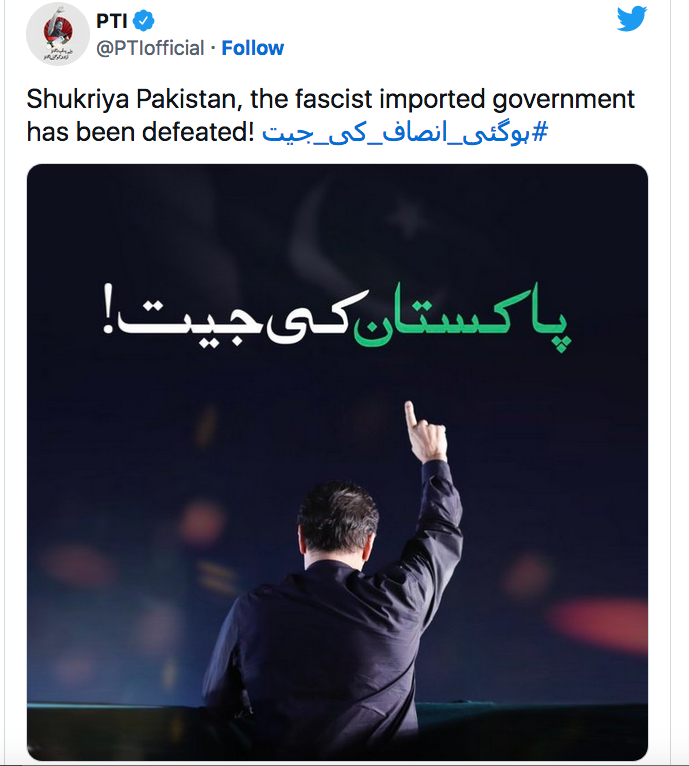 Thanking its voters and supporters, the PTI on its official Twitter handle said, “Shukriya Pakistan, the fascist imported government has been defeated!”

Voting began at 8am and despite some incidents of clashes, the process did not stop and continued till 5pm. 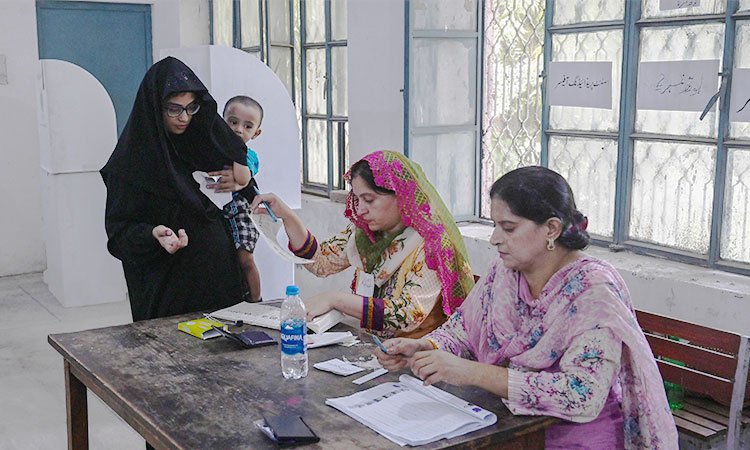 A woman casts her vote at a polling station in Lahore. AFP

Clashes and scuffles between the workers of the Pakistan Muslim League-Nawaz (PML-N) and PTI were reported in certain areas of the 20 constituencies of the Punjab Assembly where the polling was held for these by-elections.

Tension and clashes were reported in Jhang, Multan, Lahore and Sheikhupura districts of Punjab province. Some workers were injured in the fracas.
A fight broke out between political workers at the polling station of Panjar in Rawalpindi as well.

Punjab Home Minister Attaullah Tarar took notice of the dispute that broke out in PP-158 Lahore. He said the PTI’s Jamshed Iqbal Cheema and Saeed Mahis seriously injured a PML-N worker. Orders for the arrest of the PTI leader were issued.

Former foreign minister Shah Mahmood Qureshi, whose son, a member of the National Assembly, who is contesting a Multan seat, raided a ginning factory, owned by PTI candidate from Muzaffargarh Moazzam Jatoi, alleging that rigging was taking place there. 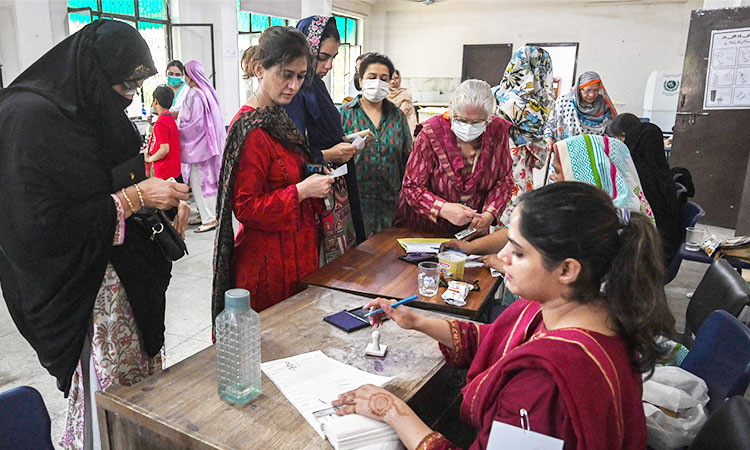 Voters arrive to cast their ballot at a polling station in Lahore on Sunday. AFP

PTI Chairman Imran Khan’s Chief of Staff Dr Shahbaz Gill, protected by the personnel of the Khyber Pakhtunkhwa (KP) Frontier Constabulary (FC), also reached the factory. The police sought the permission of the FC to be in Punjab and said they would be sent back in the absence of permission. The FC vehicles had no registration plates, officials said.

Gill alleged that attempts to rig the election were underway as “police clearly acts as a PML-N wing.” He claimed that the councilor in the PTI camp had been “threatened and then arrested” as he shared a video of the incident.

In a tweet he claimed that the Election Commission of Pakistan (ECP) was complicit in the attempts to hijack the election as he alleged: “four million voters were falsely recorded dead and the names from voter lists were added to other constituencies.” He accused the electoral watchdog of altering voter lists “if there is a name on the list, it is not allowed to vote.”

The ECP rejecting the PTI leader’s claims said that the “CEC has issued clear directives to Chief Secretary Punjab and IG Punjab that no retaliatory action should be taken against any civilians or ordinary persons otherwise the ECP will take strict action”. He had also ordered “all possible measures to be taken to ensure transparent polling in Punjab.”

The presiding officers barred the media from covering by-elections in PP-7 Kahuta, Rawalpindi. They said that the media was not allowed to enter the stations because of “orders from above” but added that “Rawalpindi media representatives can come without their cameras”. They warned that “police will be called if media representatives attempt recording footage of the polling booth.”

Around 4.58 million voters, including 2.19 million women, are eligible to exercise their right to vote in today’s by-elections. The ECP established 3,131 polling stations in these 20 constituencies, out of which 676 have been declared highly sensitive and 1,194 sensitive.

As the chief election commissioner (CEC) urged voters to “vote for their favourite candidates today” in a bid to “not only strengthen democracy but also bless Pakistan with stability”, he also directed law enforcement agencies to “not allow any violations of law or violent incidents.”

The CEC ordered law enforcement to “take immediate and strict action without discrimination” should any violations occur. He also issued directives that “if an incident occurs where the election commission is the competent authority, the case should be registered with the commission immediately.”